It’s time to warm yourself up and spin the ice reels in the exciting new online slot by Greentube called Arctic Empress. Players will go on a journey into the freezing kingdom of the beautiful Empress. The Arctic Empress slot has five reels and 30 paylines, and those who will impress the Empress with their courage will be able to activate some of the bonus features included in the game, such as free spins. Discover the features of this frozen Greentube slot in our Arctic Empress Slot Review. 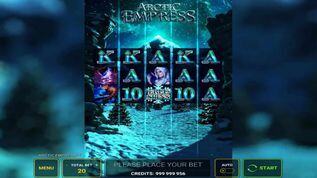 Arctic Empress is a new online slot by Greentube that is winter themed and has a mystic feel in it. The action in the Arctic Empress slot takes place on a frozen reel set that is composed of five reels, three rows, and 30 active paylines. Moreover, the game has expanding reels bonus feature which can change this configuration, as well as other bonus features for which we’ll talk more below.

In terms of other game specifications, the RTP of the Arctic Empress slots is 95.12% which is a little on the lower side, given the fact that many Greentube slots are super volatile. The variance of Arctic Empress is medium and the game has the opportunity to reward up to 900x the stake. In this online slot, you can adjust the bet from a minimum of just £0.20 and up to £40 per spin. This means that there are enough betting options to cover every player’s budget.

As we’ve mentioned above, Arctic Empress has a winter-inspired design and it features the beautiful Empress as the main character in the Arctic environment. The reel set is placed on a frozen forest background and the game is pleasing to the eye thanks to the blue and black background colours. Each symbol in the Arctic Empress slot perfectly matches the design and you’ll hear a great soundtrack in the background while you spin, including the noises of the forest and howling wolves.

Arctic Empress slots has a simple but user-friendly design that is responsive and optimised to work on all desktop and mobile devices. Regarding the slot symbols, you’ll find A to 10 royal symbols alongside creatures from the colder places such as squirrels, birds, and polar cats. Of course, the highest-paying symbol is the Arctic Empress herself, and there are also wild and scatter symbols that can contribute to your overall win.

How To Play Arctic Empress Slot

To start your arctic adventure in the Arctic Empress slot, the first thing you have to do is to place your bet per spin. This can be done by pressing the plus and minus buttons located in the left corner below. You will then see the total bet that the game will use for every spin, and when everything is ready, press the green ‘START’ button located on the right corner below. Arctic Empress accepts bets from £0.20 and up to £40 per spin, so you’ll have plenty of options to adjust your preferred bet amount.

Alternatively, you have the option to activate the Autoplay feature so the game will spin by itself and you don’t need to press the start button for every spin. In case you’re confused about the gameplay and the value of each symbol, you can head to the Menu and read all the important information about the Arctic Empress slots. The Menu is located on the left corner below the reels, next to the Total Bet button. Under these options, there is a small bar where you can turn on and off the sound, play the game in full screen and exit the game.

How To Win Arctic Empress Slot

To form winning combinations in this online slot, players must land at least three matching symbols from the leftmost reel. As Arctic Empress slot has 30 active paylines, it means that there are 30 different combinations that can give you a win. Wins are calculated according to the paytable, so your reward will depend on the symbols that you’ve landed. In case you activate the expanding reels feature, the game will increase to 5x9 reels and 90 active paylines. Impressive, right?

Greentube has a reputation for developing simple slots with great bonus features. When it comes to the bonus features included in the Arctic Empress slot, the game doesn’t disappoint. There’s plenty going on and the Empress will reward the most courage players with some of the following features:

Expanding Reels is a bonus feature that can be randomly activated in an online slot. During your spins in the Arctic Empress slots, you might hear ice starting to crack. It displays the Expanding Reels feature which can expand the reels up or down by one row, adding 10 more paylines each time. Therefore, if the game reaches its maximum potential, you’ll be playing on a five-reel, nine-row game that has 90 paylines. The more paylines you play with, the more chances you have for landing winning combinations.

If you hear the howl of a wolf when playing the Arctic Empress slot, it means that the Wolf Wild has arrived. The wolf symbol is an expanding wild symbol in this game which maximises your chances of winning. This is another randomly triggered bonus feature which won’t be activated as a result of some landed symbols. When triggered, the Wolf Wilds feature will add stacked wilds to 1 to 5 reels, so you can get a screen filled with wilds.

Players that want to try the Arctic Empress slot for free before wagering real money will be able to play this game in a demo version at online casinos that offer demo slots. The Arctic Empress slot free play is a great chance for players to test out the game and see how it works, as well as to check how frequently it gives out winning combinations.

Arctic Empress slot does a decent job in its bonus features which are the slot’s biggest strengths. The only downside is the RTP of this game which is 95.15%, less than the average percentage of 96% or higher. Anyway, it’s a high-quality game with impressive features and responsive design, so you can play it on a mobile device for the best gaming experience.

Discover the Arctic Empress slot by claiming a welcome offer right from this page and play at top-rated online casinos.