Even though it has been a while since the Blankety Blank slot has been released, it is still played by many players from around the world. The gameplay is pretty exciting, especially if you manage to activate one of the bonus features. You will need to get the letters B, L, A, N and K on the reels to activate the bonus.

Those who are old enough to remember the 1980s surely remember Blankety Blank, a TV show that went live in 1979 and ended in 1990. In a way, it marked a decade and OpenBet decided to relive this show with their Blankety Blank slot game that was launched in 2010.

You can play Blankey Blank slot with the minimum stake of 5p, but you can also go as high and place a £125 bet.

As soon as you open the game and start playing, you will see that the design is pretty much the same as the television show. The top of the screen is for the logo of the game while the sides hold the paylines.

At the bottom of the screen, you’ll find the features and options that you can adjust in the game, and here you can find the paylines, the bet, paid and total bet, as well as info about the slot. As always, here are the Bet Max and Auto Play, right next to the Spin button.

Overall, the game has a pretty decent design which is well organized, and they’ve used the music from the show, a pretty entertaining track!

There are higher and lower valued symbols, as expected. Some traditional slots symbols such as bars and sevens make up most of the symbols but there’s also a prize hamper, the triangle/circle logo and of course the Blankety Blank cheque book and pen.

The game’s logo is a wild symbol and worth up to 10,000 coins while the letters B, L, A, N and K are the scatter symbols which activate the bonus feature. 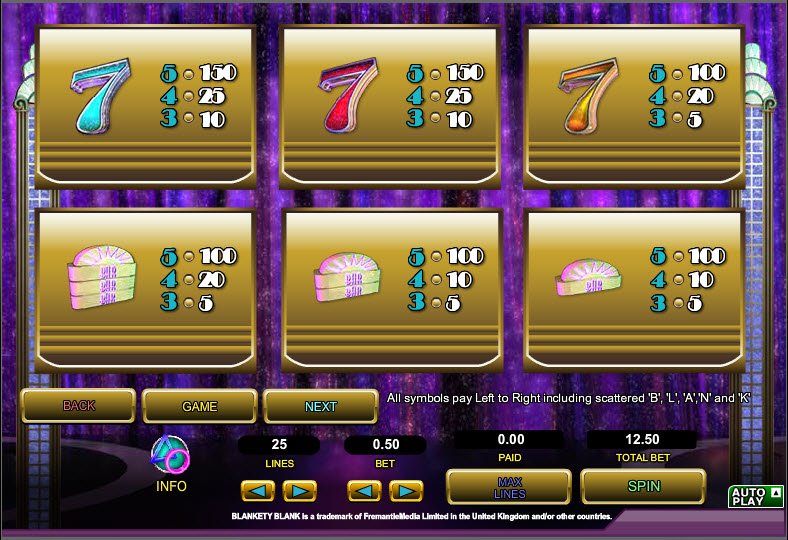 How to Play Blankety Blank Slot

We already went through the buttons, which will help you adjust the wager and start spinning the reels of Blankety Blank slot. So, once you are ready to start playing, simply click on the Spin button to set the reels in motion. You can find the value of the symbols, by clicking on the paytable button. However, you need to keep in mind that in order for you to land a winning combo, you will need to get at least three matching symbols on an active payline.

If you remember the television show this will all seem familiar to you; you need to land the letters B, L, A, N and K on the reels in the same spin and the game will begin. It’s in three parts as follows: 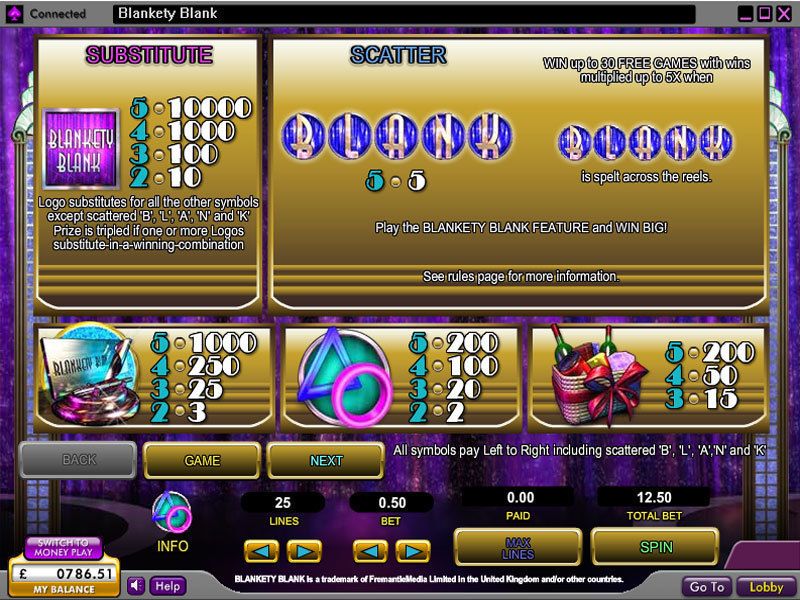 In this case, we’re talking of Blankety Blank free play, a mode that doesn’t differ from the real money version of the game, with one exception – in free play mode you don’t have to make a wager, you can play just for fun, without any financial risks.

So, if you’re looking to play for fun, the free play mode is a great choice. You will get familiar with the game and everything it has to offer, but you won’t need to make a wager. Later on, when you get acquainted with the game, its theme and its features, you will be in a position to make an informed decision as to whether you want to actually play this game or not.

The best thing about Blankety Blank free play is that you can activate the bonus game and experience the game in its entirety, even without making a real wager. When your demo session starts you are awarded a number of virtual funds that you’re free to use as you would use actual funds.

You can decrease and increase your virtual stake as you please and if you run out of virtual funds you can just reload your game window and the same amount will be awarded again. All in all, you will be able to have all the fun, without any risks.

Even though it has been a while since the Blankety Blank slot has been released, it is still played by many players from around the world.

The gameplay is pretty exciting, especially if you manage to activate one of the bonus features. You will need to get the letters B, L, A, N and K on the reels to activate the bonus. Once that happens six celebrities will pop up and if two of them pick the same word you will get five free spins. In a way, this bonus feature matches actual Blankety Blank show.

Up to 30 free spins can be activated and your winnings can be multiplied by two, three or five and that applies to the total prize that you manage to win in the bonus game.

With such a big multiplier as the ultimate jackpot reward, and an RTP of 95.38% Blankety Blank slotoffers awesome playing conditions and circumstances.

Wheel of Fortune On Tour