Play the Dawn of Egypt slots for a chance to win up to 5000x on the bet. The game comes with ten fixed paylines and five reels that turn up scatters, scatter wilds and wild symbols. A free spins bonus has a symbol upgrade feature and there are two symbols that are worth 10,000x onthe payline win. 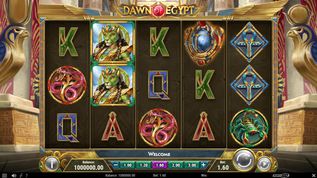 It seems that Play'n GO have an endless inspiration for making slots that are set in Ancient Egypt. That's alright though, because we are still waiting for a release that doesn't impress. Needless to say, they've distilled their craft to perfection so no two games in this theme feel the same.

Dawn of Egypt slot offers an adventure through the corridors of the imperial palaces of this famed civilization. The stunning graphics avail a look into gilded columns, gold-tipped pyramids and a fun-loving gameplay that includes symbol upgrades, a free spins bonus and wild scatters.

The layout of three rows and five reels offers an engaging adventure across ten always active paylines. Wins are made with three or more matching symbols and such outcomes can post on more than one payline.

Anyone looking to venture into the other universe that is parallel to Play'n GO's Ankh of Anubis slot or Legacy of Dead, then the game at hand offers just that adventure.

The slots experts at Play'n GO have made a terrific game that both plays seamlessly and has amazing graphics features. Again, we are in an alternative Ancient Egyptian universe and one that is less dystopian compared to Ankh of Anubis.

The symbols in Dawn of Egypt slots include a blue lotus flower, an ankh, a scorpio, a snake and two deities - Osiris and Maahes, the lion god. The rest are the royal cards done in an impeccable gemstone design. Each win outcome results in a flurry of light and golden dust around the symbols.

Dawn of Egypt offers a musical score that captures well the glory and lustre of this civilization.

How to Play Dawn of Egypt Slot

In a familiar environment that is typical for games by this company, we will find all of the controls at the bottom of the screen, below the reel-set. In the very bottom left corner are the settings for sound, turbo play and the menu which leads to the company's information about the game.

To start our adventure on the Dawn of Egypt slot the silver round spin button needs to be pushed for each turn. The game will deduct one time the selected bet, the amount of which is displayed in the window to the left of the Spin button.

A wide range of bets makes the game available to any budget. Players can roll starting at only ten pennies per spin, while the maximum is £100.00. The bet amount can be changed between any two spins, except in the autoplay mode.

Those who want to engage Dawn of Egypt hands free can press the smaller round button in order to configure the autoplay mode. A selection of automatic spins presets is available at that menu, as are optional stops that allow greater control in minding the balance while the game is playing on its own.

How to Win Dawn of Egypt Slots

Besides base-game wins with three or more matching symbols the game has a bonus feature and modifiers in it. The focus of the game is on the juicy payouts that can be made by a number of the high-paying symbols on the paytable.

To have the free spins bonus trigger players need to get three or more scatter symbols, which is represented by the golden pyramid that has an electric glow to it.

The wild symbol is also there to substitute for any, except the scatter. This symbol is represented by a beautiful depiction of a scarab amulet.

When the scatters stop on the reels Dawn of Egypt starts the Wheel of Gods where the players can win between three and 20 free spins. During the bonus, each spin results in an upgrade of a randomly selected symbol to the one that is next to it on the scale of value.

The wild scatter pays a cash prize for the number of symbols on the reels and also triggers the Pyramid Spins. In this bonus the upgraded symbol is retained and the game can retrigger an unlimited number of times.

Play’n GO are known for releasing their online slots as demo games. This allows the players to try any of the available games before playing with real money.

We have a stunning online slot that offers the possibilities for scoring big wins, however you’d need either scatters, scatter wilds or the wild symbol to make those wins. The two highest-paying regular symbols can be substituted by the wild or wild scatter. A maximum payout of 5000x awaits the luckiest among the players out there.

Discover the Dawn of Egypt slots by claiming a welcome offer right from this page and play at top notch online casinos.