Rich Wilde And The Tome Of Madness Slot

This is the latest installment of the Rich Wilde slots series. The game has five horizontal and five vertical rows for its reel set and delivers the winnings in the form of cluster pays. The 2000x sum is the game's top payout in a string of events and the return to player theoretical outcome is 96.53%. There is a major bonus feature here, with additional sub features, which deliver special wild symbols and multipliers. Claim a welcome bonus to play the Tome of Madness at one of the online casinos on this page.

Rich Wilde And The Tome Of Madness Slots Online

Take Rich Wilde and the Tome of Madness on an adventure through vortices and parallel universes - and a possible payout of 2000x on the bet.

Rich Wilde And The Tome Of Madness Overview

Judging by the success of earlier releases, it is not surprising that Play’n Go decided to go with a new sequel. The good thing with the Rich Wilde slots is that the theme is pretty obvious when you read the title – Rich Wilde visits the Tome of Madness and that’s all we’re going to say at this phrase. That and the fact that the maximum possible payout in this slot game is 2,000 times your wager per payline.

If you want to know more keep reading, or better yet register with one of our partner site and play this game.

However, you don’t have to read into the story to much, you can just spin the reels and focus on the symbols that appear on them. Rich Wilde and the Tome of Madness slot comes with a set of symbol prizes, multipliers and bonus features.

We already mentioned that this is not the first Rich Wild slot, so let's have a brief view of the other games of the series.

Firstly, we have the mega popular Rich Wilde and the Book of Dead. This is, according to many the most popular Play'n Go slot ever and it is available both as an online game and a land-based slot machine. Unlike the game that we're reviewing here, Rich Wilde and the Book of Dead features five reels and ten paylines, a lot closer to the standard for modern video slots. If you want to know more about it, have a look at our review linked above.

Rich Wilde and the Aztec Idols is another title of the Rich Wilde series. Here, Rich Wilde discovers the ancient Aztec world and the great thing about this game is that you can claim a prize worth 5,000 your bet per line. This version isn't as popular as Book of Dead, but is still enjoyed by many.

How To Play Rich Wilde And The Tome Of Madness

Start your adventure by selecting the bet per spin from the multiple amounts that are available between the starting bet of 10p and the maximum of £100 per spin. Select the bet per spin from the sums that are available in the bottom left side of the screen. The bet can also be selected from the three-dash Menu symbol that is located in the bottom right part of the screen.

The game has an autospin feature, in addition to the standard spin button. These are located on the right side of the reel-set. This option avails multiple automatic spins to be made, while registering all eventual wins and bonus features. The format of the reel set is five by five, which is not very typical, but the arrangement of paylines isn't a typical one either.

This kind of arrangement of the reels allows for the cluster pays type of play. That means four or more matching symbols in a cluster equals a symbol payout, and these can also be made with the help of the reel modifiers and bonus features. The various symbol pays don't have to occur on a payline because there aren't any. As long as the symbols are in a cluster and number four or more, the Tome of Madness will pay the win.

How To Win Rich Wilde And The Tome Of Madness

The paytable can be accessed from the menu button. It is a useful source of information for the players who want to view the symbol pays, how the bonus features are triggered and other information regarding the gameplay and game rules. The most valuable symbol in Rich Wilde and the Tome of Madness slot is the amulet featuring Ctulhu.

When a cluster of ten matching symbols falls on the reels the payout is a 100 multiplier on the winning bet. That symbol is followed by a sword, and then by a blue-diamond ring. Each of these pay 60 and 40 for ten clusters. The last of the high-paying symbols is the skull of a tentacle-like creature, paying 30x. The rest of the symbols are orbs and these represent the low-paying category, There are, of course, the specialty symbols such as the bonus scatters and the wild. 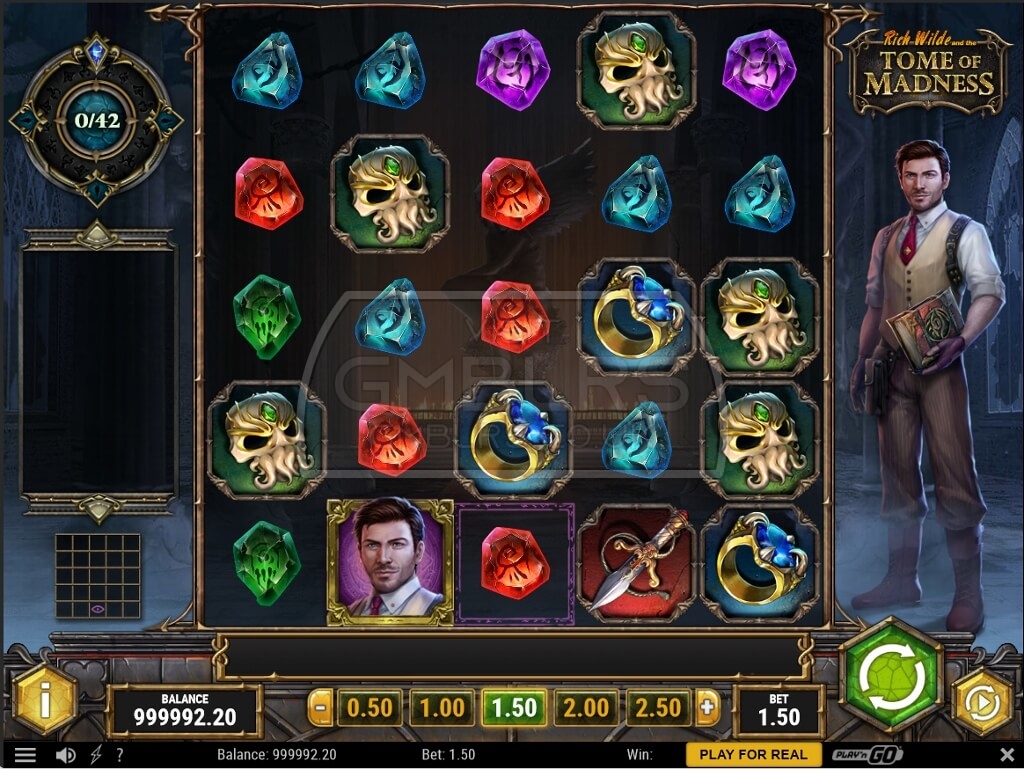 How to Activate the Bonus in Rich Wilde Tome of Madness?

As mentioned, this cluster play game brings something special to the online slot world.  At first the Tome of Madness can be quite confusing to get hold of, so we do suggest looking at the paytable.  However, let me break it down for you here on how you go about activating the bonus:

Of course Rich Wilde and the Tome of Madness can't be simple, as if the bonus game wasn't dificult enough to understand how to activate, there are two portal affects as mentioned above that have different affects:

Rich Wilde And The Tome Of Madness Bonus Features

Even when the release was announced without detailed information, every player who had an experience with one or two of the previous Rich Wilde slots, was able to assume that the game  will be stocked with bonus features. Lo and behold - Rich Wilde draws on a number of things that alter the reels or grant free spins or multipliers.

Rich Wilde's portrait is the game's wild that comes with a multiplier. The winnings are doubled when this symbol is part of that cluster.

Furthermore, there is the Other World free spins bonus which doesn't come too often, but when it does it will kick Ctulhu's tentacled behind with the help of four special wild symbols that are placed on random positions on the grid; the Abyss feature which has again, four wilds that when part of a win open the Abyss Portal Effect; and the Void feature, which has the special wild symbol win as a trigger for the Void Portal Effect.

Yet another feature that is part of this bonus game is the collecting of the Eye Marks. There is a grid with marked fields, which represents the points which trigger boosters whenever a win occurs on the corresponding places.

After you have collected all of the eye Marks in the bonus rounds however you will be granted with a "Mega Wild" which is in the form of Ctulhu, and will drop down through the grid grant you more and more wins!

Rich Wilde And The Tome Of Madness RTP

Play N' Go are the slots experts behind the latest edition of the Rich Wilde chronicles and the game has a return to player theoretical outcome that is fitting to the exciting gameplay and the reputation of Rich Wilde slots. Without much ado, the RTP of this game is above average, at 96.53%.

100 Spins Challenge on the Tome of Madness

Here is another installment of our 100 spins challenge for your viewing, to see if we can get a bonus on Rich Wilde and the Tome of Madness.  Remember as always this is just a representation of how the slot works, and you may not have the exact same experience.  Especially in this instance, as it appears our resident Slotter Macko had lady luck on his side!

Rich Wilde And The Tome Of Madness Volatility

This is a very volatile game, which means that you can keep on playing for quite a while without hitting a win, but when a win does occur, it can be more significant compared to other slots. In other words, if you're willing to take a bit riskier bets, Rich Wilde and the Tome of Madness might just be the right game for you.

Mobile Version of Rich Wilde And The Tome Of Madness

This is a mobile-friendly game, it was built using HTML5 technology, which means that you just need to open a casino site in your mobile browser, register if you don't hold an account already and start wagering on Rich Wilde and the Tome of Madness slot. You can play it on a mobile device such as a smartphone or a tablet and it supports multiple operating systems, so it doesn't matter whether you have an iPhone or an Android.

Our Rich Wilde And The Tome Of Madness Slot Review

We have here one of the best cluster-pays slot games. It seems the action doesn’t stop on this game. In terms of variance it seems it’s been placed in the middle - and that leaves the door open for a number of medium and potentially big hits over a time of play. The top payout of 2000x isn’t much, but the question is, how many times could this and smaller but still worthy wins occur?

Play Rich Wilde and the Tome of Madness at one of the online casinos on this page. Claim a welcome offer and get bonus money or free spins, right from this page.

GET A £50 WAGER FREE CASH BONUS