Get ready for a reel adventure with the mighty Greek goddess of War and Wisdom. Powered by Play N Go, the Rise of Athena slot is a five-reel, 10 payline game with wilds, multipliers and free spins. With an RTP of 96.20%, you can win prizes of up to 5,000x your stake. Athena is known for providing knowledge and wealth to the people. So, are you going to prove your worthiness to the Greek goddess and spin for the chance to win huge prizes? Find out more about this well-designed game in our detailed Rise of Athena Slot Review. 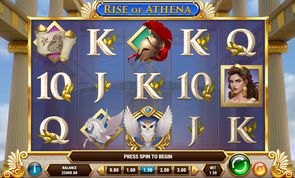 Athena was the Goddess of War and Wisdom, daughter of Zeus. Her bravery and knowledge have inspired many developers to create different slots based on Ancient Greek mythology. Here we have a new slot release from Play N Go, dedicated to the powerful Goddess. The Rise of Athena slot will take you to the ancient Parthenon to face the Goddess in a reel adventure with wilds, multipliers, free spins, and prizes of up to 5,000x your stake. In our Rise of Athena Slot Review, you’ll find everything you need to know about this game. So, let’s get started.

About Rise of Athena Slot

While many slot developers have used Zeus as a source for inspiration, not it’s time for his daughter to steal the show. Rise of Athena is a new online slot from Play N Go, inspired by Athena, the Goddess of War and Wisdom. Here, you’ll be playing on a grid with five reels, three rows and 10 active paylines. Athena is mostly known for her strategic skills in warfare and is the Goddess of heroic endeavour. So, your job in this game is to prove your worthiness to Athena, who, in return, will reward you with generous prizes.

To start your Ancient Greek adventure on the reels in the Rise of Athena slot, you will have to place your bet per spin first. This game accepts a wide range of betting options, starting from £0.10 and going up to £100 per spin. To win, you will need three matching symbols on an active payline, starting from the leftmost reel. The only exception is the Athena symbol as you only need two of these to land a winning line.

Play N Go has packed the Rise of Athena slot with some great specifications and rewards. If you manage to trigger the game’s bonus features and get the most out of it, you can end up winning prizes of up to 5,000x your stake. This means that, if you play with the maximum bet per spin available, you can win up to £500,000 in a single spin! Of course, in order to achieve that, you must take advantage of the free spins bonus feature, as well as from wilds and multipliers.

As its title suggests, the Rise of Athena slot is based on Athena, the Goddess of War and Wisdom. This Greek mythology-themed game has the Goddess as its main character on the reels. The reels are placed on a background showing the Parthenon, a temple dedicated to Athena, with an animated blue sky and Athena’s golden statue in the centre. Overall, the game has a beautiful design with high-quality graphics, and everything is clear and crisp. Rise of Athena has a traditional, but charming look, like every other slot release from Play N Go.

Moving on to the symbols, the paytable in the Rise of Athena slot is composed of low and high-paying symbols. The low-paying symbols are the standard A, K, Q, J and 10 royals designed to fit the Ancient Greek theme. Next are the high-paying symbols that include ancient scrolls, amphoras, warrior helmets, Pegasus, and Athena the Goddess. Of course, Athena is the premium symbol that can give you up to 150x your stake for five of a kind. In addition, there is an ancient coin symbol marked with a W, which is the wild. As always, it substitutes for all regular symbols and helps you form a winning line. Another special symbol is the scatter symbol, designed as Athena’s bird, the owl, which triggers the Free Spins feature.

RTP, Variance and Payouts for Rise of Athena Slot

The theoretical Return to Player (RTP) percentage of the Rise of Athena slot is 96.29%, which is an average. Moreover, the game’s variance is medium, which makes it popular among the players. Players enjoy medium variance slots the most because they offer the best of both high and low variance games. They offer relatively smaller but more frequent payouts. And if you manage to trigger the bonus features, you can end up winning up to 5,000x your stake. So overall, this is an excellent slot with a big potential to become hit among the players, thanks to its specifications and features. Here you can read more about the Variance, Volatility and RTP in online slots.

Gameplay and Features on Rise of Athena Slot

Rise of Athena is an impressive game that has two main bonus features. First is the multiplier wilds feature which can combine prizes of up to 27x your stake and then there’s the Free Spins feature. You might think that there is not much happening in this game, but these features are quite powerful. And they can give you thousands of pounds if you get lucky. So, let’s explain the bonus features in the Rise of Athena slot.

The Free Spins feature is the main sensation of the Rise of Athena slot. In this game, you should look out for the Owl scatter symbol. When you land 3, 4 or 5 of this symbol anywhere on the reels, you will get 1x, 20x or 500x your total stake. In addition, you will trigger the Free Spins feature and will receive 12 spins to play with. During this feature, any wild symbol landing on the reels can become a sticky wild with a multiplier. The multiplier will be reduced by 1x on each subsequent free spin until it runs out. When this happens, it disappears from the reels.

Rise of Athena Slot on Mobile

The Rise of Athena slot is optimised to work on all mobile devices. The design, gameplay and bonus features work without issues when playing on mobile. This game is developed with HTML5 so it’s mobile-friendly and can adjust to any small screen, on any operating system.

Play N Go is one of the most popular developers you’ll come across in the online slots world. The developer has made numerous online slots in the past few years, all of which are high-quality and packed with interesting features. One of the latest Play N Go slots to hit the market is the Golden Osiris slot, an Egyptian-themed game with cascading reels and free spins. Another fresh release from this developer is the Feline Fury slot that also comes with high payouts of up to 5,000x the stake. Or, if you are a fan of the legend of Excalibur, you should play the Rise of Merlin slot, a game similar to Rise of Athena, but with a different theme.

Rise of Athena is an impressive slot that has a lot to offer. There, it’s all about the Multiplier Wilds and the Free Spins features that can give you top prizes of up to 5,000x the stake. This is a game with medium variance, average RTP, and a wonderful design that guarantees you a top-notch gameplay experience. Thank you for reading our Rise of Athena Slot Review and good luck if you decide to go on an Ancient Greek reel adventure with one of the most powerful Goddesses!

Discover the Rise of Athena slot by claiming a welcome offer right from this page and play at top-rated online casinos.