Play the Age of Gods Apollo Power slot which is part of Playtech's exclusive line of jackpot slots. In this edition we have six reels that spin across 50 paylines. The game delivers the respin feature with just one of the wild respin symbols stopping on the reels. There is a second wild that substitutes for any, and the top symbol value is 1000x with two such symbols. 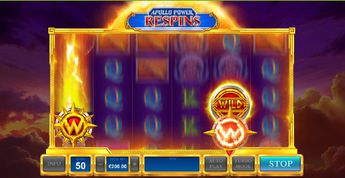 Embark on your Age of Gods Apollo Power slot adventure and play for a chance to win one of the jackpots.

Playtech are responsible for creating one of the most popular and frequently played online slots series, the Age of Gods series. Most of these games are either jackpot or progressive jackpot games and this is the case with the Age of Gods Apollo Power slot. The game's four jackpots comprise one part of the action, while there is plenty to play for when it comes to the symbol wins.

The reel action unfolds on four rows and six reels which spin across 50 paylines. Plenty is going on in this slot on bets that give the players a wide range from which to embark on a slots adventure. Age of Gods Apollo Power comes with a respin feature and this is one of those random events that can boost the winning sums in a random act of kindness on the part of the random number generator.

As it is the case with most other online slots, the winnings are paid from left to right when three or more of the same symbols land on a payline. Age of the Gods Apollo Power slot can deliver more than one winning outcome per spin. The game has a wild symbol that substitutes for any other and there is a wild that does the same, plus triggers the respins.

Playtech have definitely doubled down on their approach to drawing out the Age of the Gods slots series. There is the usual feel and vibe about the game, with a still background and a solid frame that encases symbols that stay silent until they become part of a winning combination.

The musical theme may as well be an outtake from an epic movie about a mythological clash between good and evil, but our favorite sound is that of gold coins being thrown inside a sac, on top of an existing pile.

That being said, it is a familiar theme with a familiar look and feel, so no novelty in the Age of Gods Apollo Power slot.

How to Play Age of Gods Apollo Power Slot

Prime the reels and rows for the gameplay by first selecting the total bet. Work the minus and the plus buttons to arrive at your desired amount for the bet per spin.

The game allows smallest bets of £0.25 which is half of a penny per payline for the potential line bet win. The maximum bet meets Playtech's usual cap at £500.00, but there are lots of options that can be selected for a low, medium or high stakes action on the Age of Gods Apollo Power slots.

The reels are sent spinning for the potential wins by hitting the Spin button in the bottom right corner. Pressing the button repeatedly short-stops the reels for an ultra-fast reel action which beats the pace that has been set when toggling on the Turbo Mode button.

There is then the Auto Play button which allows the players to select between ten and 100 automatic spins. There is another option there and that is to make the reels spin until infinity.

How to Win Age of the Gods Apollo Power Slots

The game comes with few symbols carrying a hefty prize, as well as four jackpots: Power, Extra Power, Super Power and Ultimate Power. The symbol wins can be seen from the paytable which is tucked behind the Info button in the bottom left corner of the screen.

Age of the Gods Apollo Power slot has two most lucrative symbols - the respin wild nad the standard wild. Six of these on a payline result in a prize of 1000x multiplied by the line bet. The bust of Apollo is worth 600x if it happens in six positions on a payline.

The main and only feature of the game are the Apollo Power Respins. One of these staying on the reels initiates the feature. In it, the Respin Wild starts moving around the reel-set and in each field it covers it will leave behind a regular wild symbol.

The symbol can move throughout the entire reel-set, leaving wilds everywhere. These can interact with the symbols that stop on the reels. The Age of the Gods Apollo Power slot bonus stops when the Respin Wild goes back to the position from which it departed.

There is a reason why the Age of Gods series are so popular - it’s both the potential of winning one of the jackpot prizes as well as the features and the symbol wins. The players can pick any of the slots in this batch and always get a thrilling ride from the play.

Claim a welcome offer to play Age of Gods Apollo Power slot at some of the best online casinos in the UK.

Age of the Gods

Age of the Gods Norse: Book of Dwarves

Age of the Gods: Ruler of the Seas

Age of the Gods: Ruler of the Skies

Legacy of the Gods Megaways