Let the sea rise and bring wins with multipliers of up to x5 in the manner of respins. All it takes for Oceanus to work his magic and rise the reels is a single win and subsequent wins to trigger the multipliers. This is the game's only bonus feature and one that is well-worth. The top symbol pays 50x and there are few sumbols that pay decent amount for a top theoretical payout of 25,000x on the winning bet. 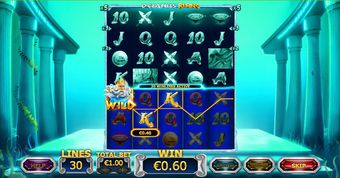 Play the Oceanus Rising slots for a chance to win cash prizes thanks to the respins and multipliers of up to x5.

The oceans are terra incognita. We don't know what hides in the crevices underneath the enormous expanse of water. Sunken alien craft? A lost civilization of aquatians? Imaginations run wild on this topic, but we can remain on firm ground while playing the Oceanus Rising slot.

This is a Playtech game that offers multipliers, respins and rising rows for an expanded reel-set. Oceanus Rising starts as a slot of three rows and five reels, but that changes with the tide. The number of paylines is an always-active 30 but this number also rises as you get into the four reel.

Payouts are made with three symbols of the same kind  falling on the game's paylines from left to right. There can be more than one payline win and additionally, as you reach the fifth row the game starts to add multipliers on your wins of x2, x3 and x5.

The slots experts at playtech have come up with slot game that offers a style of play that is very entertaining, but this has come at a compromise to the layout of the game and the graphics.

The rising tide in the Oceanus Rising slots has the reel-set appear with all of the seven available rows and because of that it is placed further in the distance.

The focus of the action shifts to the upper reaches of this underwater horizon as you get closer to the topmost reel which has a x5 multiplier.

Because of this, the game's symbols can't really shine for their qualify even though they have been drawn well and rendered artfully.

A musial score goes into full cinematic swing as you play the game in autoplay mode, while payouts and other events are accentuated by classical land casino slots sounds.

How to Play Oceanus Rising Slot

Once you have done on your ultimate deep diving suit fully right, you may head to the main square where the reel-set is located. This is where the action can commence with the push of the spin button.

All of the settings can be found in the bottom of the screen. The number of Paylines is displayed in the leftmost window. To the right of it is the setting for the Total Bet.

The amounts that are available to the players of Oceanus Rising slot begin with £0.10 per spin and end with the maximum of £500.00 which is a signature cap on the majority of Playtech slots.

Those players who think that things under water move a lot slower than they do above are welcome to turn on the Turbo Mode. To the left of this button is the Autoplay, which lets you choose from the number presets for the automatic spins.

How to Win Oceanus Rising Slots

The payout mechanism is standard for three rows and five reel slots and the multipliers are an added bonus.

The game has a wild symbol that substitutes for any but also pays a nice prize. If you get to see Oceanus on five positions on a payline you'll cheer to a prize of 50x multiplied by the winning bet. It is notable that this symbol pays for two of the same also, albeit a much smaller prize at 0.2x on the win.

The second most lucrative symbol is that of the octopus, which pays 20x for five of the same. The galley pays 18x, the fountain of your pays 16x and the crossed swords pay 12x.

Besides the golden shield which can bring 10x on the bet for five of the same, the rest of the symbols are the high cards, from ten to the ace, and these pay between 0.2x to 6x for wins of three, four and five symbols.

The bonus is what defines the game and it is simply triggered whenever there is a win outcome. This sends a splash that extends to the upper levels of the sea horizon where the tide can reach highest for x5 multipliers.

But before you get there there has to be a number of wins. The second respin pays x2 on the win, the third pays x3 and the fourth reaches the top with x5.

Because there isn't a free spins bonus this feature does it for us. The benefits don't stop at the fourth respin, because wins can extend until there are no more on the respins. The multiplier, however, stays at x5.

The slots experts at Playtech are always eager to share their productions with the general player’s public, so the game is available as a free play demo. You may find it at casinos that host online demos.

The game at hand comes with one feature and it’s enough for it because it triggers with each spin that wins. A succession of wins means bigger prizes. It’s as simple as that in the rich world of Oceanus.

Lord Of The Ocean