Alladin's Wealth is a Pragmatic Play online slot that delivers all the real action based on the legendary Arabian hero, Alladin. The game has a huge max payout prize of 250,000 coins on the line bet and works on nine paylines. There are plenty of bonus rounds, both a pick-me bonus game that delivers cash prizes in one instance, and multipliers in the other, and there is a free spins bonus fetures which could result in both. The reel-set arrangement is five reels and four rows, and all of this is available at one of the casinos on this page. Claim the welcome bonus to play Aladdin's Treasure slot. 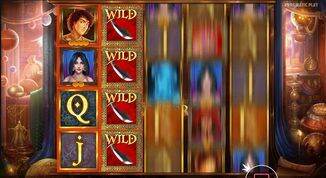 Play the famed Aladdin’s Treasure slot for a chance to land bonus features, cash prizes and potentially the game’s maximum payout of 250000 coins.

Certainly, the name Aladdin rings a bell as one of the famous cartoon characters from the 90's. The cartoon's depiction is predated by the Arabian lore about riches, fortunes and how to win the heart of a princess, written under the Ali Baba and the 40 Thieves body of stories. In the Aladdin's Treasure slot we have a premise that is most commonly associated with that name. Excellent reel action unfolds on four rows and five reels, filled with bonus symbols and bonus features, as well as the potential to win cash prizes.

The game is set in the backroom of a Middle Eastern store, which appears just as it would in any movie that projects an adventure taking place in the ancient lands of Babylon. This mysterious backroom is used for storing wares that wouldn't fetch a lucrative prize on the marketplace, however, many of the clay pots in fact do contain cash prizes which can be selected during the Pick Me bonus feature. Besides these pots, there is the lamp that contains an apparition which is a genie, and one that is very benevolent and which provides cash prizes.

The fun in Aladdin's Treasure slots seems to never stop, as long as the players know how to dispose with their balance in a way that would prolong the game and give it a chance to trigger the bonus features. On the other hand, the starting bet in this Pragmatic Play slot is not a negligible amount of £0.50 per spin, so whoever is ready to play should consider well the reaches of his or her adventure.

How To Play Aladdin Slot

Setting up for the gameplay requires a proper orientation for those who haven't played any slots by Pragmatic Play before. The bets could be set from the bottom right corner of the playing surface. Pressing on either the plus or minus button will open up a window where the players can specify the amount of the bet. The box contains three settings: Coins per Line, Coin Value and Total Bet.

The Total Bet setting in Aladdin’s Treasure is a way to skip the first two and increase the increments of the Coins per Line. Otherwise, setting the Coin Value means selecting the amount that will be placed per payline. Knowing that the game has 50 paylines, starting with the £0.01 means the smallest bet will be £0.50. However, to multiply that Coin Value per each line, use the Coins Per Line, which is basically extrapolating that amount by the number of selected times (up to 10).

With the 50 lines always active, the players need to just play around with these settings and the preferred bet will be certainly arrived at. As for other buttons that have a say in the game, there is the Autoplay button that lets the players configure a number of automatic spins with a loss and win limit. The paytable, located in the bottom left corner under the 'i' button, will open up all of the symbol pays and bonus feature information.

How To Win Aladdin’s Treasure Slot

The game has a number of high-paying symbols. Precisely, these are the picture symbols, of which there are four. The nefarious prince is the one symbol that pays the least in this category. Next over is the princess and third in line is the genie, who can deliver a prize of £10.00 with a bet of £1.00, when five matching symbols land on a line. Aladdin brings double that amount with £20.00 for five on a payline.

The rule of the Aladdin’s Treasure slots states that all symbols pay left to right, except in the case when there is the scatter symbol on a grid that displays a winning combination. The scatter is the treasure chest, which besides removing the left to right pay rule, it also gives a 2x multiplier to go along with the free spins, if it appears in three or more instances. The players can win up to 50 Aladdin's Treasure free spins if five of the treasure chest symbols land on the reels.

The game has a bonus symbol which can earn points for the player, or precisely up to 10500. This happens with the Key bonus symbol landing in three or more places. This triggers the Pick Me bonus feature where the players can win cash prizes along the way, by selecting the pot with the most lucrative amount.

This is a fine online slot by makers who are famed for producing a number of excellent online slots. Aladdin’s Treasure has it all - bonus features, lucrative pays and a free spins bonus.

To start your adventure, you can select a welcome bonus for one of the casinos on this page and head on to explore Aladdin’s Treasure slot.