The cowboys have arrived in the little town in the Wild West. The leader of the cowboys is a peculiar-looking rider, cursed to live an eternity with a skull as his head. Are you going to help him break the spell by finding the Renegade Symbol and winning a tremendous bonus? Developed by Pragmatic Play, the Cowboys Gold slot comes with five reels and 10 paylines, capable of paying 6,065x the stake. It comes with an average RTP and a free spins feature with retriggers that increase the multiplier by 5x. Find out more about this exciting game in our detailed Cowboys Gold Slot Review. 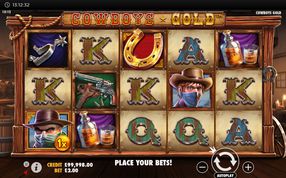 Another Wild West themed slot is coming to the scene, and it’s a game with top-notch graphics and some interesting features to make an impression. The Cowboys Gold slot is developed by Pragmatic Play and is able to pay some generous prizes to the luckiest players. Expect to find free spins, multipliers, retriggers, and money collects that will give you the biggest prizes. Our Cowboys Gold Slot Review covers it all, so feel free to read it and decide which online casino is going to be your choice for playing this thrilling game.

Join the cowboys and get ready for another Western adventure where you’ll be looking for gold in this five-reel, 10 payline slot from Pragmatic Play. The main character in the Cowboys Gold slot is the skull head cowboy who will stop at nothing to get his hands on the biggest prize in this online slot, so your job is to help him do that. By finding the Renegade Symbol that triggers the Money Collects feature in this game, you’ll help the cowboy break the spell and bring back his look. Besides this feature, there is a free spins round accompanied by retriggers and multipliers of up to 5x.

While the Cowboys Gold slot looks pretty simple with its 5x3 grid, it becomes more interesting once you trigger the bonus features. These features can lead to 6,065x stake wins, which is impressive. Starting your Wild West adventure will require you to place your bet per spin which can range anywhere from £0.10 to £100. Adjusting your bet per spin is easy as the Pragmatic Play layout allows you to select coins per line and coin value. There’s also an Autoplay option which gives you the opportunity to adjust up to 1,000 auto spins.

To score a win when you play the Cowboys Gold slot, you need to land three or more matching symbols from left to right across any of the paylines. starting from the first reel The only exception is the horseshoe symbol as you only need two such symbols to form a winning line.

Like its title suggests, the Cowboys Gold slot has a Wild West theme, full of cowboys and bandits. The reels are made out of wood and are placed inside an old saloon bar. You will also hear a guitar-based soundtrack that fits perfectly with the theme. All in all, it’s a well-designed game with high-end graphics, a game that tells the story of the wanted cowboy with a skull head.

Furthermore, the game has three special symbols. First is the leader of the cowboys which is the Bonus Symbol, used for triggering the Free Spins feature. Next is the sheriff’s badge which is the wild symbol, acting as a substitute for all regular symbols. Finally, the Renegade symbol, designed as a red-eyed cowboy with his face hidden under a red scarf, is used for triggering the Money Collect bonus feature.

RTP stands for Return to Player and it displays the hypothetical payout of the game. The RTP percentage of the Cowboys Gold slot is set at 96.00%, which is the industry average. Moreover, this game’s variance is medium to high. This means that you won’t get many wins but when they come, they will be bigger. As you can notice, the Cowboys Gold slot has some interesting specifications and features, so if you manage to activate them, you can win up to 6,065x your total stake per spin. Isn’t it great?

This game is all about the bonus features, and these are the Money Collect feature and the Free Spins feature. In addition, the game comes with a wild symbol that appears on all reels and substitutes for all regular symbols, except for the bonus and renegade symbol. The wild can help you form winning combinations more easily. And now, let’s explain the two main features included in the Cowboys Gold slot and see what the fuss is all about.

When the cowboy symbols land on the reels, you will notice that some of them have a small coin displaying a value of 1 to 100x the bet. If these symbols show up at the same time as the renegade symbol on the fifth reel, the Money Collect feature is triggered. Then, the values from the symbols are collected and paid out to you. The Money Collect feature can occur in both base and bonus game.

The Free Spins feature is triggered when the skull head cowboy meets the Renegade. You need to land three bonus symbols on reels 2, 3 and 4 in order to be rewarded with 10 free spins. Also, landing at least three bonus symbols plus the renegade symbols will give you a retrigger. The Free Spins feature can be retriggered up to three times, and each retriggers adds more free spins and increases the multiplier for the Money Collect feature:

This means that you can win up to 25 free spins and a 5x multiplier in total.

Just like the other online slots that Pragmatic Play has released in the past few months, so does the Cowboys Gold slot is optimised to perfectly work on all mobile devices. It will load on any Android, iOS or Windows device that you have. Thanks to the HTML5 technology and the responsive design, you won’t face any issues when playing the Cowboys Gold slot on mobile.

It has been a productive year for Pragmatic Play as the developer released plenty of online slots which have quickly gained players’ attention. You might have tried their Dragon Tiger slot that was recently launched and tell us the never-ending battle between the golden dragon and the golden tiger. Or, have you checked the Pirate Gold Deluxe slot by Pragmatic Play? This online slot is packed with five reels and 40 ways to win, allowing you to claim wins of up to 15,000x the stake. Moreover, if you love pets, particularly dogs, you should try The Dog House slot, a game released last year that offers a free spins bonus and sticky wilds.

The Cowboys Gold slot from Pragmatic Play delivers a true online slots experience, especially to players who enjoy playing Wild West-themed slots. The story behind this game is great and is perfectly tailored into an online slot. The Money Collects feature is such an interesting and unusual feature founded in online slots which especially comes into play during the Free Spins round. With a high-quality design and great payout potential, the Cowboys Gold slot is the perfect addition to the popular Wild West slots theme.

Discover the Cowboys Gold slot by claiming a welcome offer right from this page and play at top-notch online casinos.