A game of cascading wins that makes payouts in the Ways to Win manner comes with 46,656 potential winning combinations and cascading wins. Additional symbols up to three full rows can be added following a single winning outcome, and these can continue in succession. The game's variance is high and the maximum win potential of more than 47,000x is just the type of figure high variance slot players may be looking for. 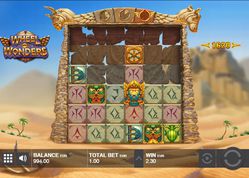 There is a lot more to this Push Gaming production than sand dunes and ancient palaces made of limestone. The Mesopotamian desert is home to a reel set of three rows and six reels, which can expand to greater heights.

About Wheel of Wonders Slot

Surely enough, the game is steeped in the mysticism of an ancient civilization and players are going to find an adventurous experience that begins each spin with 729 ways to win.

The defining moments in the Wheel of Wonders slot are the three circles at the top of this shrine, where the game keeps track of the pieces that can trigger win-boosting features that modify outcomes on the reel set.

This is only one detail of the Wheel of Wonders bonus features which we are going to cover in a little bit.

In terms of design, the game succeeds in grasping the look and feel of the desert. The reel set represents some sort of a shrine, a towering structure that can fit a total of six rows and six reels. There are few animated details to the gameplay, which can give your reel adventure a jolt. That is to say, playing Wheel of Wonders slot is entertaining in and of itself.

The low-paying symbols of the game are a set of cuneiform etchings in clay tiles. The high-paying symbols are three deities that date back from the time of the earliest civilization of Sumer, and, accordingly, they can pay between 1x your bet for two of a kind, up to 40x your bet for six of a kind for the lion symbol.

RTP, Variance and Payouts for Wheel of Wonders Slot

Push Gaming has instilled the mathematical model with an RTP of 96.50%. This is a figure that sets a measuring stick as to the percentage of potential returns from the game. Nevertheless, the stated number is above the average, which is 96.00%.

In terms of volatility, Wheel of Wonders slot has it at a high level, which translates to low payouts as the norm and potential big wins of more than 47,000x as a possibility. Exquisitely large wins are possible in Wheel of Wonders but the random number generator can pull out such a winning outcome on extremely infrequent occasions.

Big win possibilities have been evident in the bonus feature, especially when the reel modifiers kick in to boost the odds for that sort of outcomes.

Gameplay and Features on Wheel of Wonders Slots

Players can get the benefit of the wild-substitute symbol, which is depicted in a golden bust of Sargon, the first ruler of the kingdom of Akkad. The game gets its name, however, from the Ancient Wheel feature, which can trigger when a full row comprising additional positions has been added to the reel set.

In the event, players get to spin the wheel and gete one of three classes of prizes: Bet Multipliers, Total Multipliers and Base Game Features, which are reel modifiers. These are the following extra features.

The main feature of the game is awarded when the reel set has been unlocked for its full ways to win potential. In other words, consecutive winning outcomes have resulted in the opening of all additional rows on the playing field.

In the event, the game can award win multipliers between 5x and 8x plus five free spins. The win multipliers remain as such for the duration of the feature but it is also possible to get rewarded additional spins, based on the number of winnings.

Wheel of Wonders on Mobile

Push Gaming has been making mobile-friendly games since it was founded and this game is no exception in that regard. Players can play Wheel of Wonders on iOS and Android, as well as on personal computers. The view tends to be a bit limited when playing on a regular mobile screen because of the reel set's six rows, but that doesn't seem to take away from the quality of the graphic design.

Is there a Jackpot on Wheel of Wonders?

The game doesn't come with an instant jackpot prize. The maximum win potential of 47,233x your bet can be reached by landing a multitude of winning outcomes in succession during the gold retriggering event, with the highest win multiplier.
Since the game is still quite new at the time of us reviewing it, there hasn't been any news of a winning outcome of that sort, yet.

Overall, the game can provide engaging gameplay that can get quite exciting thanks to the consecutive wins payout system and the maximum of 46,656 ways to win. On the other hand, the volatility level is high and players will see a fair number of low-paying outcomes and non-winning spins before the bonus feature is triggered.

Claim a welcome offer from this page and play Wheel of Wonders slots at top rated online casinos.