Golden Macaque slots is based in the part of the jungle where a secluded spot hides a pagoda temple. Spread out on five reels and three rows, the game has 243 ways to pay which can occur in the consecutive reels style of play. The possibility of scoring one of the four in-game jackpots brings even more excitement, as do the additional opportunity for big wins in the Fire Blaze Respin feature. 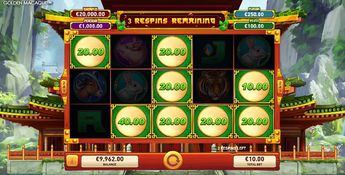 Play the Golden Macaque slot for a chance to land the bonus drum or the fire respin feature that can lead to one of the jackpot prizes.

Rarestone Gaming's slots experts have spotted a peculiar simian and it gave them the inspiration for the Golden Macaque slot. The game is released on Playtech's network and by that it will be available at a long list of online casinos.

Four jackpots line the ticker above the reel-set and these are all in-game progressive amounts. Land three or more symbols of the same kind to get a winning outcome or play for a chance to get lucky in the Fire Blaze Respin Feature where bigger and better cash prizes can be made, thanks to the Golden Macaque slots special symbol - the macaque.

Players will find a wild and a number of special symbols, including a free spins bonus feature which comes with a kicker - no card symbols are present during the bonus.

The game packs enough action so as to be part of Playtech's Group roster of releases. Not all of it is fully animated, which reserves a steady environment in which only few symbols offer a moving visual display.

At any rate, the symbols in Golden Macaque slot have been drawn and rendered rather well and the picture symbols do spring to life when they become part of a winning outcome.

The background is a still of tall rocks and a waterfall and the reels and rows are wrapped in a cascading pagoda temple.

There is a musical theme that adds a feeling of levitation to the gameplay, but it isn't much or overbearing on that matter.

How to Play Golden Macaque Slot

Start the game by pressing the Spin button which is placed centrally, underneath the middle reel. To the right of it and in the bottom right corner of the screen is the Total Bet field, where the players can select the bets.

This window displays the number of the overall bet. The smallest amount that can be player per spin is £0.20 and the biggest amount is £500.00 - because this slot has all the markings of a Playtech slot.

Golden Macaque slots five jackpots are part of a dynamic display which changes with the size of the bet. The active bet will display the amounts that correspond to it in the event the game triggers the jackpot game.

Those who want to take on the game while fully relaxing at the same time can use the Autoplay button. This button is to the left of Spin and lets the players choose the number of automatic spins from the available presets.

How to Win Golden Macaque Slots

Wins are made on consecutive reels of three or more of the same symbol kind. The wild substitutes any symbols except the scatter and the jackpot respins symbol - the drum. The wild appears on the middle three reels.

The most valuable symbol in Golden Macaque slot is the tiger but it only pays 2.5x on the winning wager for five of the same. The mufflon pays 1.5x, the pig pays 1x, the cock does 0.75x and the rabbit half on the winning bet.

Any of these amounts are for five of the same symbols. The royal cards pay significantly less. These payouts are disappointing, but keep in mind this is a jackpot game and the Fire Blaze Respin feature is where the reel magic takes place.

The scatter symbol is represented by a golden gong. Besides paying a prize for three, four or five on the reel-set, the game triggers the Gong Feature. The golden macaque wild symbol appears during that bonus.

The drum is a bonus symbol also. Six of these start the Fire Blaze Jackpots feature where drums come with attached prize amounts. These are collected when there are no more respins.

Each drum that stops on the reels carries a prize and retriggers the spins at three. The Jackpot star symbol transforms to award one of the jackpots.

The golden macaque slot symbol transforms to reveal a prize that is equal to the sum of prizes on the drum symbols.

The ultimate jackpot is awarded when the reel-set is filled by the drum, jackpot star or golden macaque symbols.

Playtech Group offers a lot of their new releases for demo play. This is a leading company that has many slots at the online casinos and free play games can be found at those casinos that host demos for registered players.

The players are facing a jackpot slot that pays small amounts in the base game. The tradeoff is clear and the point of playing the game is in being patient or lucky enough to trigger the bonus play sooner than later.

Is Golden Macaque a jackpot slot?

The game comes with four jackpot levels whose amounts are relative by the active bet. The jackpot game is the Hold and Win feature where only bonus and jackpot symbols can land on the reel-set.

What payout system does Golden Macaque have?

Payouts are made on 243 ways to win, where symbols that land on adjacent reels comprise a winning outcome. Matching symbols can land on any position across the three rows.

How many free spins can you get on Golden Macaque?

The bonus feature starts with 3 respins. Each time when a bonus symbol lands on the reels the number of spins are reset to 3.