The game comes with a layout of three rows and five reels. These can spin across 20 always active paylines winning outcomes can be made with three or more matching symbols and the reels can spin starting with 10p. In terms of the machine’s specifics, Aurum Codex has a theoretical return to player of 95.77%, high variance and a maximum payout potential of 4131x multiplied by the amount of the winning bet. 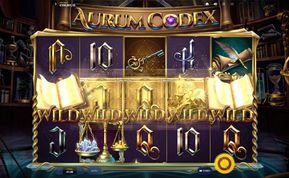 The slots masters at Red Tiger Gaming are taking the players to the alchemist’s tower - a place damp and gloom yet filled with the warmth of learning and magic. The name of the game bears a mystical edge of its own. Called Aurum Codex slot, it spells out in veiled terms what the player may expect from this reel adventure.

One of the hottest titles released in 2020 that resembles the mirrorred reels feature of Aurum Codex is the Twin Spin Megaways slot. The game has a completely different payout system, however, the locked reels that can trigger on any spins closely resemble the style of the present game. Both are excellent reel adventures, different yet sharing a defining mechanism.

in terms of gameplay, Aurum Codex can be quite engaging thanks to the set of extra features. Most of the special moves that the game can trigger involve the wild symbol, as it can turn into gold, lock on the screen and transform other symbols. In addition to this wild symbol trifecta, Aurum Codex can initiate a free spins bonus where players have a chance to win more cash with the cost of the wager that triggered the bonus.

The graphic design speaks of Red Tiger Gaming’s best days and they are keen on repeating their craft across most of their games. This is one of those games and we are happy we’ve come to discover it for the players out there. Aurum Codex slots bears all markings of an alchemist’s lab. The symbols are objects that are utilized for the making of precious metals out of mere ore, as well as for other feats of magic.

All of the symbols are very well drawn and rendered so that they show depth and dimension. Winning outcomes are animated especially when one of the bonus symbols, including the wilds, is part of a winning event. The game responds by marking that payline with golden light and energy. In addition to all of this, Red Tiger Gaming have secured the perfect musical theme for the adventure, so much so that you kind of don’t want to turn it off at all.

How to Play Aurum Codex Slot

The layout of the screen has Red Tiger Gaming all over it. Before making any moves on teh reels it is best that players check out the default bet that’s been set by the casino and then hit the spin button. Because if that bet is high-stakes relative to what players are willing to pay, best is to change it.

the button in the bottom left corner of the screen holds the list of the available bet amounts. The smallest bet in Aurum Codex slot is 10p per spin which lets players get a taste for the game, check out the features and so on. Bigger bets can make returns whose presence can be noticed on the balance. The biggest bet in the game is $20.00 per spin. Regardless of the bet, the game spins across all 20 paylines.

One way to play Aurum Codex is by selecting the Auto button which opens up the settings for the automatic spins. The players can choose from the presets and press the play button right away or they can add optional settings by pressing the Advanced button.

There are few other buttons that are part of the screen. One is the thunder button that causes the reels to spin faster. The speaker button lets you turn on or off the sound and the ‘i’ button is for the paytable, where players can view the symbol payouts.

How to Win Aurum Codex Slots

Winning outcomes can crop up with any spin and payouts are made with three or more matching symbols. these can occur on multiple paylines from the same spin, so the winnings can be greater than what is on the paytable for the matching symbols.

the most valuable symbol on the paytable is the scale that weighs the silver and the gold. Five of a kind there pay 300x multiplied by the payline bet, four pay 150x nad three pay 60x. The skull and beak of a raven sitting next to a candle is worth 160x for five, 80x for four and 40x for three.

The scroll and feather symbol and the key are the two remaining picture symbols in Aurum Codex slot, and from there on the royal card symbols and the ten pay lesser amounts, between 4x for three ten cards and 70x for five aces.

Three hourglass symbols can trigger the free spins bonus during which the alchemy wild symbol locks in the position where it lands. These symbols land on reels one and five only, however, if the symbols coincide across on the same row then all of the symbols between them become golden wilds, and these substitute for all, except the scatter symbol. It is possible to land multiple golden wilds because the first and fifth reel can be seen turning up a stack of two wilds. It can be said that this is almost a guaranteed win because there'd be two rows filled with the matching symbol kind, which may further interact with symbols on the remaining row.

Red Tiger Games can be found at many reputable online casinos. Players can have a taste of this marvellous game as a free play demo slot, if the casino hosts their games in practice-play mode.

A decent maximum payout and a  killer feature game with locking wilds is what every pro player can take for a good reel adventure. The game is visually stunning and there is the gameplay to match.

Discover the Aurum Codex slot by claiming a welcome offer right from this page and play at top-rated online casinos.

Where can I play Aurum Codex by Red Tiger Gaming?

One of Red Tiger's most sensational online slots release for 2020 is the Aurum Codex and many casinos want to have the game on their rosters, but not all can do that due to licensing. The game's page has few online venues where players can explore to play Aurum Codex slot by claiming the welcome promotion.

What is the Aurum Codex RTP?

Red Tiger Gaming has furnished the game with a theoretical return to player that can return 95.77% of the wagers over an indeterminate period of time. This sum does not reflect the possibility of making a big win that may exceed the appointed RTP.

What is the Aurum Codex bonus game?

The bonus game is a free spins feature whose highest achievement is to create golden wilds that can become extremely useful towards producing big win outcomes.