Return Of The Dead Slot

This is an Ancient Egypt-themed slot that puts the player in the shoes of an adventurer who is determined to discover a book called Return of the Dead. It goes without saying that the book is inside a pyramid where the player can play on three rows and five reels.  The layout has 10 fixed paylines and winning outcomes can form for three or more matching symbols. You can play Return of the Dead with as little as 10p per spin on a high variance mathematical model and a theoretical Return to Player (RTP) of 96.71%. 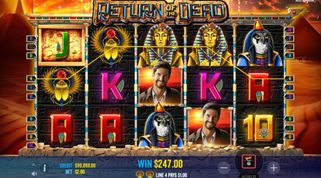 Return Of The Dead Slot Online

An adventurer who dives inside pyramid vaults and explores crypts doesn't have to look like Indiana Jones. He (or she) can be a regular guy, a regular "Joe" if you will, who wears a jacket and a button-up shirt and who has a smile on his face as if he'd just head the best news of his life.

This description sums up the hero of the Return ot the Dead slot by the new developer studio called Reel Kingdom. The game was released by Pragmatic Play and comes with a a maximum win potential of 5000x multiplied by your bet.

Return of the Dead Introduction

In terms of gameplay, the player will find the standard wild and scatter symbol and a free spins bonus which comes with the Special Expanding Symbol feature, which has become integral part of the class of online slots that begin with "Book of...". Nevertheless, Return of the Dead is all about the Egyptial riches and the payout potential shows precisely that.

Return of the Dead Design Features

Players are going to find graphic design that is quite typical for the Ancient Egypt theme. There are many such games and this is one of those that has more intricate details to all elements on the reel set and around it. The background is comprised of the sand dunes that are home to the pyramids and the reel set is a piece of a wall inscribed with hieroglyphs. That's just like in the brand new Eye of Horus Power 4 Slots slot.

How to Play Return of the Dead Slot

The game design may have been made by Reel Kingdom but the layout of the controls and buttons is all Pragmatic Play, as this is the company that released the game. As expected, the play button can be found in the bottom-right corner of the screen where it is flanked by a plus and a minus button and rests atop the Autoplay button.

Players can make the reels spin with a single push of the play button. To change the bet press the minus or plus, which causes a table to open up with all of the available betting amounts. The autoplay feature loads with all of the optional controls as in other slots by Pragmatic Play. Players can set Return of the Dead slot to spin across all 10 paylines and for a number of automatic spins according to the preset.

The bottom-center area of the screen shows the win amounts and the bottom-left area shows the amount in the balance and the bet amount. Last but not least, you can play Return of the Dead without knowing the payout amounts but if you wish to find out what you are playing fore, the 'i' button will reveal that information for you inside the paytable.

How to Win Return of the Dead Slots

This game arrives with one feature that is quite atypical for games in this category. While online slots today can make winning outcomes starting with three symbols, there are few games that have one or two symbols that can pay for two of a kind.

Well, interestingly enough, Return of the Dead slot has a row of high-paying symbols that can pay 0.5x or 1x your bet for two symbols of the same kind. The remaining winning combinations, for three, four or five symbols, can pay between 3x and 500x multiplied by your bet.

The cards' symbols can pay for three, four or five of a kind and the prize range is between 0.5x and 15x.

Return of the Dead Bonus Features

It was expected for the game to come with a wild/scatter symbol in the same bundle. This symbol is represented by the book that carries the name of the game on its cover. You need three or more anywhere on the reel set to trigger the bonus.

The bonus feture comes with a special symbol that can pay regardless of paylines and it comes stacked on a full reel. This way, the game comes with the potential to create a wall of matching symbols on any bonus feature spin.

Return of the Dead Free Play

Players can explore the features and the rhythm of the payouts by playing the game as a free play demo slot. This is possible at online casinos that have games in Practice Play mode.

Return of the Dead Closing Thoughts

Players who enjoy slots in the Book Of category will surely find this release appealing. On the other hand, the gameplay can become a tad repetitive because we've seen it all take place on the Book of Dead slot. Nevertheless, it's a fine release that does come with a big pay potential.

Discover the Return of the Dead slots by claiming a welcome offer right from this page and play at top rated online casinos.