Norhtern Lights and Relax Gaming have joined forces to put out a low-medium variance slot of 30 paylines and five reels. Perhaps the payouts aren't huge, but there are reel modifiers and a free spins bonus that can at least deliver small and medium wins more frequently compared to high variance slots. 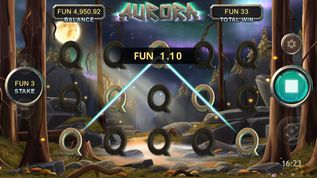 The northern fringe of the earth is a zone that offers little to behold, unless you are playing the Aurora slot.

The magnificence of the northern lights inspires a theme that offers a fun-loving reel adventure in Inuit country, which can bring about an exciting base game on 30 always active paylines. And trolls. Yes, although the title suggests the beauty of this natural phenomenon, there is one thing that isn't quite natural but can charm the reel-set of the Aurora slot.

The game was designed by the slots experts at Northern Light Gaming, who work in cooperation with Relax Gaming who have ensured for a cutting edge quality of the gaming experience. The players will encounter a wild symbol, expanding wilds, reel modifiers and a free spins bonus. All of these extra features can come together to increase the chances for a big win.

In terms of the winning outcomes, we have a list of symbols that haven't been loaded with a huge potential, however that end of the equation is balanced out by the extra features, including the free spins, that can boost the win outcomes.

The graphics design shows the skill and ability among the Northern Lights team.

The game has a very lively feel to it and a perfect ambiance created by the piercing rays of the aurora phenomenon. The moving clouds are a subtle touch that improves the visual experience, as are the fireflies which fly about the reel-set.

The reel adventure on the Aurora slots is set in the woods, which is a welcoming area for all the players who enjoy the great outdoors. As for the symbols, there are two categories - a set of totem masks and wooden rendition of the royal cards.

How to Play Aurora Slot

The game starts with the push of the blue, round spin button which will send the reels spinning once for the turn, deducting the stake from the balance one time.

If you want to take on the game hands-free you can press the autoplay button, which is the circle in the bottom right corner of the screen.

Press that button to open up the menu where you can select the total stake per spin and a number of automatic spins from the available presets. Also, optional yet helpful are the loss limit and single win limit buttons. Once ready to roll, Confirm and enjoy the show.

As for the bets, this is where Aurora slot has gone kind of amiss. A game from a developer that is yet to establish itself on the circuit should mind to offer a range of bets that starts lower than £0.30 per spin.

Considering the low symbol payout values, the stake is a big step up from most slots out there that start at £0.10 or £0.20. At any rate, the maximum bet on Aurora is a whole £42.00 per spin.

How to Win Aurora Slots

It's a standard reel-set of three rows and five reels that entails payouts that start on the leftmost reel. You need three matching symbols for a win, while the optimal number is five. And, considering the 30 paylines, more than a single win is possible.

In terms of the payouts Aurora slot offers several totem symbols which are the high-paying category. They pay between one time on the bet to the maximum of 2.5x for five of the same. The game's logo pays 5x as does the wild symbol. All of these figures are for wins of five symbols.

With outcomes like that, the rest is left to the extra features.

The wild plays a big role in the game. It comes as the letter W when it covers 1x1 on the reels, but it can also stack three symbols high on the middle reel. In the event, the wild becomes a troll statue, which triggers the free spins bonus. This is only if the troll is in full view. If it isn't, then there is a chance for a nudge that puts it right into place.

At the start of the bonus the troll becomes awake and begins to move with each spin, either to the left or to the right of the middle. In another possibility, the troll splits into two full trolls on the reels, which again, have the ability to move about.

Another extra feature is a reel modifier which can occur at random following any losing spin that contains the wild on the reels. A wind is sent through the reels that begins to turn the symbols into wilds. Some of these will end up as a wild on the reels.

The slots makers at Northern Lights have made the game available as a free play demo, which enables the curious player to try it free of charge and then play it with real money.

Here is what explains the low exposure of 150x on the winning bet. The game has a low to medium variance, which means low and medium bets are possible and that try spells are shorter compared to medium and high variance slots. So anyone looking for a very casual reel adventure, this may be the game for you - low payouts with stakes higher than the usual for the minimum.

Discover the Aurora slots by claiming a welcome offer right from this page and play at top rated online casinos.