The Orca The Iceberg And The Penguin Slot 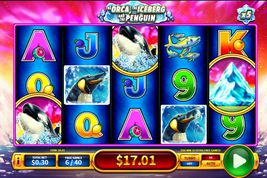 The Orca The Iceberg And The Penguin Slot Online

If you are ready to join The Orca The Iceberg And The Penguin slot, you can do so at one of the casinos on this page. Play for a chance to win the jackpot prize of 10,000 or the maximum theoretical payout of 3,000,000.

The Orca The Iceberg And The Penguin Overview

When in the mood to let the mind meditate to some faraway frontiers, what would be the most perfect place if not the endless white underneath the northern Northern Lights. There you will get a chance to spot The Orca The Iceberg and the Penguin slot. This is a slot game of five reels and three rows that plays around the marine animals that inhabit the North Pole and the vast territorial expanse underneath it. The game is rather exciting and perhaps one of the few that take this theme for its inspiration.

Besides the smooth and entertaining gameplay, there are the potential winnings, as well as the ultimate prize of 3,000,000 coins on the line bet. What this slot game also is, is one of the most free spins generous slots, as the scatter triggers a bonus feature that can grant as many as 50 free spins, which can be further retriggered. The overall gameplay is on par with the video slots at land casinos, because The Orca the Iceberg and the Penguin slots for the online casino has been adapted from the gaming cabinet. Still, the players will the full visual effect, with the animated symbols and the pretty tune.

How To Play The Orca The Iceberg And The Penguin Slot

With all of the paylines always active, the only setting that needs to be configured is the coin per line. This field is located to the left of the Good Luck ticker, where also the last winnings are displayed. There, the players can select to play with the smallest amount of £0.30 or go for some higher amounts, which end with the most expensive wager set at £300, which comes with the highest coin size of £10. Of course, there are many sums in-between these two extremes, so the players can choose the amount that works ideally for the bet.

In addition to these settings, there are few more options that can be used to enhance your gameplay and gaming experience. The Turbo button toggled on causes the reels to turn faster and deliver the outcome at a shorter time. The Auto button, which is next to the Play button, lets the player set the game on automatic spins. This could go on until the player toggles the button off, in which the automatic spins end. And last but not least, the paytable is accessed from the "i" and there the players can access the symbol pays, information about the bonus feature and the payline arrangement.

With the bonus feature and the value of the high paying symbols, The Orca The Iceberg and the Penguin slot is one game that comes with the potential of delivering excellent prizes, whether via the Wild symbol, it in combination or the free spins bonus.

The Orga The Iceberg And The Penguin Design

This is one of the very few polar cap inspired slots and we get to appreciate it for that. The slot has been built as part of a gaming cabinet for the slots parlors and land casinos, however, the developers at the Skywind Group have decided that this game is worth having as an online slot, and so it became.

The background are two icebergs surrounded by icy water. Above are the northern lights in all their glory, as much as we can feel it from a digital image. But the reel se is where all the magic unfolds. There is the reel set of five and three rows which display two categories of symbols. Those of greater value are animated whenever they become part of a winning combination: the penguin, which is the most lucrative of the standard symbols, and the orca whale too, which is the game's wild. Both of these are fully-animated and they do make a splash when they show up in that capacity.

Otherwise, there are the symbols of lower value, which are represented by the high cards, including the numbers nine and ten. The specialty symbols are the orca wild, which we mentioned, and the iceberg scatter, which is the game's scatter symbol that triggers and re-triggers the The Orca the Iceberg and the Penguin free spins bonus game.

How to Win The Orca The Iceberg And The Penguin Slot

Winning the game is a matter of luck, as slots are games of chance in which luck 'determines' whether this or that player will be the potential recipient of a strong winning combination or the game's jackpot - always random occurrences. That being said, the random occurrence of getting five wild symbols results in a rather hefty cash prize of 10,000 coins on the line bet.

Another way of winning potentially big amounts is during the free spins. Five of these symbols trigger 50 games and these can be retriggered. During this magic, there is the chance to win cash prizes without spending anything from the balance, for the number of spins that have been given.

To explore this slot game you can start by claiming a welcome bonus at one of the casinos on this page.