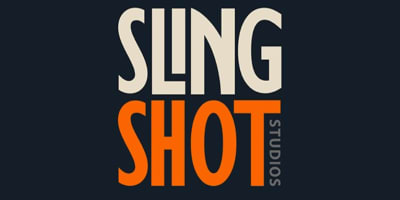 Slingshot Studios is still a newcomer to the iGaming industry, but it seems to be on the right track to success, thanks to the high-quality video slots that it has released so far. Read this review to learn all about what this provider has to offer.

Everything You Need To Know About Slingshot Studios

Our Verdict on Slingshot Studios

As we said, this is a new name in the industry, but it seems to be becoming more popular each day. This is due to the fact that its video slots so far have been incredibly immersive and exciting. They cover themes that are appealing to players and the games also offer great potential prizes too.

This company works exclusively for Games Global, which is one of the biggest and most influential titans in the industry. This means that Slingshot Studios has a much wider scope of possibilities and opportunities. Continue reading this review where we dive into the details of this provider.

Slingshot Studios’ story begins back in 2016. It was established by a mix of veterans who have extensive experience and knowledge of the gambling industry, as well as ambitious newcomers. The company’s headquarters was and continues to be in La Lucia, South Africa, but thanks to Games Global, it is present in many markets today.

Being such a young company that hasn’t proven itself yet, Slingshot Studios can’t showcase any prestigious awards yet. However, considering the quality of its games and the studio’s innovative nature, that can change in the future.

In addition to the fact that Slingshot Studios is one of the lucky companies to enter a partnership with Games Global, the studio’s work ethic and team are what set it apart. As we said, the company includes experienced professionals, as well as new talent, with a diverse set of skills, such as illustrating, designing, testing, production, animation, and so much more.

Despite being in the industry for about 6 years now, Slingshot Studios doesn’t have a very lengthy portfolio. There are currently no more than 10 games in the portfolio, and the company focuses exclusively on creating video slots. This means that players who prefer table games, poker or scratchcards, will not find what they are looking for.

Table games may not be part of the deal, but the developers at Slingshot Studios made sure to include jackpot slots that can appeal to the brave thrill-seekers. The African Legends slot comes with a progressive Wow Major Jackpot that can be quite an incredible prize if won.

In terms of the visuals, the Slingshot Studios games are incredibly immersive and captivating. The appearance and the design of the games perfectly capture the themes, plus the superior, top-notch graphics can enhance the overall gaming experience. Depending on the theme, the games are designed accordingly and are made as dark or as vibrant as necessary.

Slingshot Studios also includes optimal RTP rates for the games. Generally, the theoretical RTP is above the industry average and is set at around 96.20%. There are of course certain understandable exceptions to this, such as the jackpot slots, where the RTP is set below the average.

As we mentioned before, the games created by Slingshot Studios can be quite fun and exciting, mainly because of their appearance and the themes they focus on. You can find amusing zombie slots and medieval slots. What’s more, there are even branded slots that can be particularly appealing and entertaining.

The main attraction when it comes to the gameplay is not the layout arrangement, as they are mostly played on standard 5x3 sets, but the features. Almost all of the games are packed with a plethora of exceptional and thrilling bonus features. In addition to making the gameplay more dynamic and action-packed, they can also be quite rewarding as well.

Some of the most popular slots by Slingshot Studios include Cash of Kingdoms, African Legends, A Dark Matter, Game of Thrones Power Stacks, Links of Ra, and more.

The Cash of Kingdoms slot is the first game that the studio released after it became a partner of Games Global. It focuses on a medieval theme that can be quite fun and action-packed. This slot was praised for its exciting and innovative bonus features.

This African Legends slot comes with fantastic visuals and picturesque African landscapes. The animal symbols are presented as stone totems, which makes them quite unique and captivating. What’s more, it comes with a progressive jackpot.

A Dark Matter slot brings an intriguing combination of mystery and darkness. You can enter the dark mansion and join the characters on the reels, while you try to uncover the mystery and maybe even win great prizes. There is a great atmosphere and a realistic appearance.

As you can tell by the title, the Game of Thrones Power Stacks slot is a branded game. You can immerse yourself in this reimagined slot version of the most popular fantasy TV show and join the beloved characters. What’s more, you can enjoy the Power Stacks bonus feature and maybe even win one of the potential jackpots.

The Links of Ra slot can take you on a fantastic desert journey to ancient Egypt. You can join the mighty Egyptian gods on the reels and there are several amazing bonus features, as well as massive potential jackpots.

All of the Slingshot Studios games are created with HTML5 technology that makes them mobile optimised and thus compatible with smaller devices. You can play all of the provider’s slots on smartphones or tablets that run on Windows, Android, or iOS operating systems. The same visuals and graphics are carried over and there is no need for any additional downloads.

All in all, it can be said that Slingshot Studios is still at the beginning of its iGaming career and the best is yet to come. Its games offer high quality in terms of both appearance and gameplay, and despite not having a lengthy portfolio yet, players can still find something that would appeal to their tastes.

As a partner of Games Global, this studio has both the potential and the opportunities to become a big name in the world of inline gambling, so we can just wait and see how it goes. Now that you’ve read all about the company, you can check out most of the provider’s slots right here on SlotsWise.

What types of games does Slingshot Studios offer?

Slingshot Studios focuses only on creating video slots, exclusively for Microgaming. This means that table games, poker, or other types of games cannot be found in its portfolio.

Which are the most popular Slingshot Studios slots?

Cash of Kingdoms, Game of Thrones Poer Stacks, A Dark Matter, African Legends, and Links of Ra are some of the more popular titles released by Slingshot Studios.

Yes, Slingshot Studios is a partner of Microgaming, which means it works in alignment with the same licences and regulations, also offering security and fair play.

Yes, they are all made with HTML5 technology, which makes them compatible with smartphones and tablets. You can play them directly in the browser without the need for additional downloads.