Discover the only slot (for now) that is a retro and megaways at the same time. Super Wild Megaways by StakeLogic is one of those that offer an explosive gaming experience underneath the veneer. With two scatters - mystery and bonus - the game has a free spins bonus and a base-game that can turn up quite lucrative. 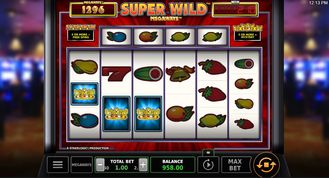 Stake Logic are stepping up with their third megaways slot before they release the long-awaited The Expendables Megaways.

This time around we have what is possibly the first retro game that's been treated to the megaways payout mechanics. Naturally, we were stoked to find out what ensues from the concept and the verdict is, yes, the game is as original as it is a thrilling ride to experience.

Super Wild Megaways slot comes with the usual: a wild symbol, a free spins bonus and 117,649 potential ways to win. A welcome addition are the mystery symbols that can render any non-winning spin something to look forward to. The retro slots machine offers its standard six reels and symbols that can fit on between two and seven positions on a single reel.

Win outcomes are made with three of the same, starting on the first reel and extending towards the right on consecutive reels. The topmost row of four reels displays four additional symbols that can contribute to the making of winning outcomes. Yet another detail that makes the game stand out there is the gamble feature which occurs following any base game win.

In terms of the graphics design Stake Logic aren't offering anything extraordinary.

It is however the idea that counts, so a retro game is original enough for a megaways engine, and perhaps this is the reason why the reel adventurers have been spared too much hoopla around the win outcomes.

In other words the symbol wins aren't overly animated. They simply jot out from their position and that is about it. Even the sound is very limited to those familiar exclamations from the land casino floor.

As far as the symbols are concerned on the paytable of Super Wild Megaways slots, we have a fruit stand of familiar items: grapes, lemons, watermelons, strawberries, bells, sevens, plums, oranges, pears and cranberries - nine of these in total.

Your adventure on the reels of this game can start with the push of the Spin button, which sends the reels spinning once and deducts the active bet once from the balance.

Make sure that you are not going to play a bet amount that you didn't intend to by checking the BET window on the very bottom ticker. We don't know what the different casinos select for their default bets, but in all likelihood that bet shouldn't bet greater than £1.00.

Super Wild Megaways slot keeps all of the game controls underneath the reels. The spin button is in the bottom right corner and to the left of it is the MAX BET. Yet another look to the left we have Autoplay button, which does not let you pick a number of automatic spins but symbol toggles this game mode on.

If you want to configure the number of spins in autoplay you need to go through the menu, which is the three dash button in the very bottom left.

Choose your bet from the Total Bet window by pressing the plus and minus buttons until you arrive at your desired wager. The smallest bet is £0.20 and the biggest is £20.00 per spin.

Thanks to the megaways and the cascading wins mechanics the game can iterate a number of consecutive wins resulting from the same spin. This offsets the meagre win amounts that may result from a single-win spin, but which are typical for any megaways game.

The most valuable symbol in Super Wild Megaways slot is the seven. Six of the same pay 50x on the winning bet - not a bad sum to win. Six still pay a decent amount of 25x and four pay 10x.

The watermelon is the next best symbol with 7.5x on the bet for six and 2.5x for five. The only symbol that returns the bet with three of the same is the watermelon, while the rest pay lesser amounts.

The game has a wild symbol that substitutes for any other except the scatter and mystery.

The Free Spins scatter is the red symbol. Four or more trigger the 12 free spins bonus and each additional one triggers five extra spins. Each consecutive win adds 1x for the multiplier counter.

The mystery scatter in the bonus game pays amounts that are different and that are fixed. For example, six of the same bring a prize of 200x.

The slots experts at Stake Logic have released the game as a free play demo, which allows the players to try it and decide if it's one to play with real money.

One thing is for sure and that is how entertaining this game is. It is probably one of the best retro-themed slots that's actually really fun to play, but that's all thanks to the megaways system. The mystery symbols can shake out some exceptionally lucrative prizes and the best part is, they aren’t fixed amounts if such an event occurs in the base-game.

Discover the Super Wild Megaways slots by claiming a welcome offer right from this page and play at top notch online casinos.