Let the potentially explosive winnings make their way on the reels of The Expendables Megaways slot. See a cast of action movie heroes battle the jungle for a chance to win more than 10,000x on the winning bet. Multipliers of up to x10, a free spins bonus and a wild symbol reel modifier are all part of this high variance slot. 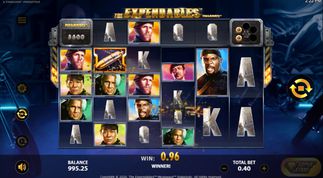 Engage in the high-octane action movie when you play the The Expendables Megaways slots. Players play for a chance to win more than 10,000x on the winning bet.

It's amazing how an amazing movie can turn into an a stunning online slot experience. Introducing The Expendables Megaways slot by Stake Logic, a game of six reels and ways to win that can reach the full potential of 117,649 and maximum win exposure of more than 10,000x on the winning bet.

As it was expected The Expendables Megaways has a cascading wins payout mechanism where the winning outcomes are deducted from the reel-set and replaced by the symbols collapsing on top and blank spaces filled by new symbols.

Those who like the movie or are simply into action movies will find some familiar faces on the set: there is the unmistakable Jason Statham and Silvester Stallone in their roles as Lee and Barney, respectively. Appearances as high-paying symbols are made by Jet Li, Terry Crews and Dolph Lundgren.

This is going to be a mighty reel adventure, fully decked out with big explosions and potential big wins.

When you play the Expendables Megaways you can almost feel the movie’s action seeping through the reel-set. The game has a very dynamic pace, which suits it really well. All of the symbols are the characters in that blockbuster movie, plus the high cards, which are the low-paying symbol category.

The players are treated to some explosive wins in the Expendables Megaways slots, as it was impossible for the designers at Stake Logic to mark the wins events without that. The soundtrack is a full-blown action tune with lots of amazing sound effects.

How to Win The Expendables Megaways Slot

Your adventure on the reel can begin by selecting a bet amount from an available range of £0.20 and £20.00 per spin. Once you've picked your stake you can go ahead and push the centrally-placed Spin button.

The Autoplay function lets you enjoy the show without your manual input. Simply select the number of automatic spins from the available presets.

In addition to the high and low paying symbols, The Expendables Megaways slots has a wild symbol which substitutes for all, except for the scatter. The wild is represented by the dog.

The most lucrative symbol is that of Stalone's with 6.5x on the bet for six matching symbols on the reels. Jason Statham's character is next on the scale with 3.75x followed by Jet Li's with 0.85x for six.

Even though you are making a play on The Expendables Megaways, this amount isn't quite lucrative. Those in the know are aware that megaways slots pay smaller amounts on the symbol wins, however, the cascading system can lead to many wins in a row arising from the same spin amount.

One of the symbols that appears on the reel-set are the bullets. The more you get the more ammo you have on the meter in the upper right corner. Once the magazine is full the assault rifle will riddle the reel-set in an attempt to put a greater number of wild symbols on it, or remove the low-paying card symbols.

The game's free spins bonus is triggered with four or more skull symbols anywhere on the reels. This brings a starting 12 spins for the player, a number which could increase with additional skulls stopping on the reels. The cascading wins mechanism works in the bonus game as well and adds a x1 multiplier for every successive win on the same spin.

What is more, when you win an outcome with any of the royal cards, that particular card symbol will be removed and is not going to appear until the end of the bonus. During the free spins with expendables feature the low paying symbols (ten to ace) may be removed from the reels one symbol class by one. This happens when the low paying symbol has made a win outcome, so if the aces make a win, they will be removed, however this has to occur by scale, starting with the lowest to the highest symbol class.

The Expendables Megaways slots bonus feature can be retriggered with three or more skull symbols dropping on the reels again.

The players will be surprised that the game is going to hit the free play demo list of slots at the online casinos that offer this privilege. Once the game emerges from the promotional period, the players will be able to try it as a demo.

Everyone is excited about this game. The maximum exposure is bigger than most megaways slots and the meter bonus can be a nice boost with the wilds, in addition to the free spins bonus. Can’t wait to try it? Here is how you can get to play this amazing megaways slot.

Discover The Expendables Megaways slots by claiming a welcome offer right from this page and play at top notch online casinos.