Get the oil rig gushing when you win consecutive wins on the Black Gold Megaways slot by StakeLogic. The game comes with five reel modifiers that are churned out thanks to the topmost window. The free spins bonus just adds pepper to the already spicy gameplay that seems to be delivering events with nearly every turn. All this for a chance to win the top 14,000x on the winning bet. 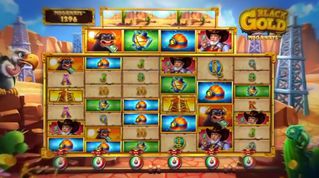 Play the amazing Black Gold Megaways slot on the maximum potential ways to win and for a chance to land up to 14,000x on the winning bet.

The slots experts at Stakelogic are making a big comeback with a slot game that is all about digging for that gold. Black Gold that is. The oil field is the stage for the potential big wins of a Megaways game which is licensing the mechanism from Big Time Gaming. The game is released by the famed casino technology company Novomatic and appears on their platforms.

The arrangement of the reel-set is six reels and rows that shift and change between two and seven, depending on the symbol size of each respective reel. This works to the effect of delivering a maximum 117,649 ways to win and a minimum of 324.

The players will find the standard two symbol categories and wins that are made with three or more of the same symbols. The consecutive win feature is on, which means a single spin can lead to subsequent wins in the Black Gold Megaways slot, which is filled with extra features.

Being set in the theme, the games comes with the inevitable cliches, such as a desert and oil rigs which provide the backdrop to gold-digging symbols such as dynamite, lanterns, mining helmets, and these is the big boss of the Black Gold Megaways slot with the ten gallon hat.

The surrounding environment to the reel-set is filled with the game's controls. Stakelogic have made everything old-school and inconspicuous, so you have all the controls at hand's reach, including a window that displays the ever-changing megaways number in the top left corner.

The black gold digging adventure starts with the push of the spin button. This sends the megaways turning and the rows shifting as the game makes a reach-in for the possible big win.

Bets start with the low of £0.20 per spin and the cap on the maximum bet is at £20.00 per spin. You can select the amount that you prefer from the Total Bet window located underneath the reels.

You can send theBlack Gold Megaways slots in autospin mode by selecting the button that is to the left of MAX BET. This provides the option of choosing from the number presets but you can also add a stop on the single win or a total loss limit.

To reach the paytable you can use the menu button from the left bottom corner. There is contained information about the symbol wins and all the bonus features.

The megaways engine enables consecutive wins action which can start from a single spin. Besides the six-reel reel set on Black Gold Megaways the game is topped with an additional row of four reels.

As it is usual with almost all megaways slots, the two symbol categories include pictures and cards. The cards start with nine and end with the ace.

The high-paying symbols include the lantern, helmet, buffalo and the big boss. The latter is the most valuable symbol in Black Gold Megaways, paying 50x multiplied by the line bet.

The wild symbol is the dynamite and it substitutes for any, except for the scatter. What is more, the dynamite symbol can arrive with an attached multiplier amount between x2 and x10.

Like we mentioned at the start, this is a game that's loaded with features. There are five reel modifiers and each one is delivered from the topmost window that turns their respective symbols.

The options for the bonus features, besides the Black Gold Megaways free spins bonus, are:

Random - places a wild symbol on a random location
Stacked - places one or two stacked wild symbols on the middle four reels
Multiplier - two wilds will appear with a multiplier attached
Double Up - all wins, including consecutive wins, get a x2 multiplier
Destroyer - if the spin doesn't result in a win, all low paying symbols will be removed from the reel-set

Stakelogic aren’t overly known for releasing their games as demos. If you are to find a demo from this developer it is going to be online casinos that offer demo slots to registered players. That being said, your best bet to try the game is to claim a welcome offer and play with bonus money.

The conclusion regarding this release is as straightforward as possible. There is no way of missing this release as it will be jumped on by every well-informed punter. The bonus features can occur simultaneously and lead to high pay potentials, while the consecutive wins can really surprise your balance if there are more hits from the single spin, in which case the multipliers accrue to give the winning outcome the final gloss-over. Black Gold Megaways slot is filled with surprises and we are surprised that Stakelogic have let this one out the way in which it’s been made.

Claim a welcome offer and discover Black Gold Megaways slot at some of the online casinos on this page.