A slot game of simple three reels and five paylines, but super nice graphics and smooth gameplay. This is the Magic Stars 3 slot, by Wazdan, and comes with a top symbol pay of 400x as well as potential multiple wins of 80x and 40x. Play the game on its always-active paylines on bets that starts with as little as 0.10 per spin. The game's theoretical return to player outcome is 96.50% 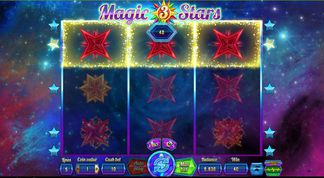 Discover a three-reel and five-payline slot game with stars for symbols - this is the Magic Stars 3 slot, with a top symbol payout of 400x.

We have a brand new game coming from the slots experts at Wazdan studios, dropping in the second half of 2019. It features three-reels and five always-active paylines, which seems to be part of the three-reel slots craze that's been going in 2019. This is a fitting addition to the list of games that have such a reel set. Much like the Starburst slot, the Magic Stars slot features stars for its symbols.

In addition to the classical reel-action Magic Stars also has a wild symbol that substitutes for any other and a set of symbols that are stars in different colors. There is also a gamble feature and the players get the option to set the volatility between the low, medium and high options. The reel action starts with the push of the Spin button, but before we do that we ought to check out the default bet and perhaps choose an amount that is fitting to our style of play.

How to Play Magic Stars 3 Slot

The settings for the bet per spin can be located in the bottom left corner of the screen. This is where we will see that the number of paylines is fixed at 5 and that there is just one setting that can be altered - that of the Coin Value, where the values are between one and ten. The players can choose to toggle between Coin Bet and Cash Bet by clicking that part of the screen, which is to the right of Coin Value. This changes the display, but in the end it always deducts the specified amount for the bet per spin.

The smallest bet of Magic Stars slot is £0.10 and the biggest bet is £100.00. There are many options in-between the two ends and the players can easily switch between bets. A couple of other buttons are present on the screen - the Max Bet and Auto Play. The former option does exactly what it says - it ups the bet to the game's maximum, to the tenth level. The latter lets the players select a specific number from the autospins presets, so that the game does all the work without requiring any input on the part of the player.

How to Win Magic Stars Slots

Winning at any slots game is always a matter of luck. The random numbers generator that is part of every slot game out there is only able to deliver the winning or losing outcomes completely at random. That being said, we can consider the symbol pays and other possibilities for the winning outcomes on Magic Stars 3 slots.

The most valuable symbol in the game is the Wild, which is represented by a starburst sun of many colors. Landing three of these on a payline equals to 400x multiplied by the line bet. The wild is followed by the green, red, blue and yellow stars, all of which pay 80x when three occur on a payline.

Those non-glowing stars that also come in green, red, blue and yellow colors pay the equal amount of 40x for three on a payline.

For a quick look at each symbol pays the players don’t need to click on the paytable. Clicking or tapping on the stars themselves will display their value for a payline of three matching symbols.

This game does not offer any bonus features. Besides the Wild symbol being able to substitute for any symbol on the reels, and it brings the most lucrative pay, Magic 3 Stars slot doesn't have a bonus or a scatter symbol. There are two special symbols, however - a green and a yellow orb filled with stars, which represent the Lucky Star symbols, which can double the winnings.

One part of the gameplay which may be considered an addition is the Gamble feature. Following any symbol win, the player can choose to play the gamble game by selecting one of the options that are above the Spin button.

Selecting the option on the left opens up a board with the spheres and a list of seven stars that represent the number of times the player can double his or her winnings by hitting the good star outcome.

Pressing the spin button or the option that is added as an icon on the right hand side will claim the money from the win.

A simple slot of three reels and five paylines, that has some impressive and animated graphics, comes with an above the average return to player outcome of 96.50%

Can Your Play Magic Stars on Android or Apple Mobile?

Wazdan are few more releases short of becoming a known producer of gaming technology. However, all of their games have been optimized for the mobile screen and this game is included in that list. As long as your device is android or apple, the game will launch on any mobile-able casino.

The game is likeable and fun to play. Wazdan have created quite a decent game, but one that lacks bonus features. The symbol wins are all right too, however, only one of them exceeds the 100x mark - and that is the Wild which pays 400x with three on the line.

To play the Magic Stars 3 slot and many other slot games claim a welcome bonus to one of the online casinos on this page.