Venture through the dark vaults of the pyramid and play the Relic Hunters slot for a chance to win cash prizes. The game comes with 20 always active paylines, small bets of 0.20 and six reels on three rows. There are multiple bonus features here, including two types of free spins and a pick-me game, all of which lead to cash prizes, shifting wilds and multipliers. The game's theoretical RTP outcome is 96.37%. 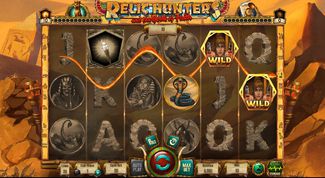 Win more than 7000x on the line bet through one of the free spins bonuses on the Relic Hunters slot.

Yet another online slot having to do with relics. No wonder. Relics are a coveted thing on the market, especially Egyptian artifacts that had been unearthed from the pyramids by bold adventures more than a century ago. The Relic Hunter slot appears like a gauntlet course with nefarious creatures and critters along the sides. These are the picture symbols that can deliver the big wins on a game that has 20 always paylines, three rows and six reels.

Additionally to all of this, the Relic Hunters slot comes with a thrilling ride on the reels, on account of its excellent graphics, fun gameplay and two bonus features: the Bastet Spins Bonus and the Pyramid Exploration Bonus. There is also a gauge that gets filled with energy and there are dark forces that deplete that energy and there is the symbol that protects it, thus it includes yet another process in the game that contributes to an overall gaming experience.

Relic Hunters comes from the studio of Wazdan, who have been working hard on a number of excellent online slots. This is one of those, so it is definitely worth checking it out, for the gameplay, for the fun of it and for the potential wins.

How to Play Relic Hunters Slot

Setting up the game requires figuring out how much of bet money are your going to spend per each spin. The amounts that are available for this game are found in the Coin Value and Coin Bet windows, located in the bottom left corner of the screen. The coin value goes from one to five and with this setting rises the bet per spin displayed in the window to the right. These amounts are credits and usually, they correspond to amounts starting with 0.20 to 20.00 per spin.

To set the reels going press the Spin button, which is the big red round one under reels three and four. The game offers an autoplay option as well, which comes useful for whoever wants to set the reels spinning for a number of times, without any input from the player.

The Balance window that is to the right of the Spin button displays the current balance and next to it is the WIN window that displays the most current winning outcome. Two more buttons can be made useful to enhance the gameplay. The turtle button is to make the reels turn faster and that to the right of it is to change the game’s variance between low, medium and high.

How to Win Relic Hunters Slots

For starters, the game pays two ways, which means, matching symbols on a payline can start from the rightmost reel and go towards the left and still pay. The left to right pay is standard in online slots.

Relic Hunters slot has a scatter symbol and two wild symbols that feature the adventurer and the adventuress. Both of these have the capacity to move to the left or to the right when they stop on the reels during the free spins bonus.

As for the most valuable symbols in the game, we have the zombie mummy paying 400x when six of these land on the reels and 200x when the matching outcome is five of the same. This symbol is followed by the gold sarcophagus which pays 320x for the best winning outcome, and that one is followed by the king cobra symbol with 250x and the scorpio with 150x.

Relic Hunters slots also has a cat status as a symbol which stopping on the reels will add to the Bastet Spins bonus meter. When the meter is filled, the game will trigger the five free spims which come with five wild symbols that are placed on the reels at random.

The Pyramid Exploration bonus is triggered by the compass symbol. In the event of triggering, there is a pick-me game that has four levels, with each one bearing potential to deliver multipliers, cash and the symbols that take you to the next level.

The scatter symbol which is represented by a pyramid is the scatter and it triggers the bonus of 10 free spins when three or more land on the reels. The wilds shift left and right during the bonus, thus, lingering on for the potential winning outcomes.

The game has been optimized to play on mobile and that’s a great thing as Wazdan games are becoming better with each subsequent release. The Relic Hunters slot will play on android or apple devices, including tables. If your online casino doesn’t offer mobile gaming, you can claim a welcome offer to one of the mobile-capable casinos on this page.

We’ve found a game that is quite decent and potentially rewarding. The multipliers and the free spins can result in high-symbol wins that will that their cash prize and elevate it few levels higher to the benefit of the player. In the best instance that is. Otherwise, the game will depend for a big win on one of the bonus features, and there isn’t just one of these.

Start your ancient Egypt adventure by exploring the game at one of the online casinos on this page. Claim a welcome offer today to start.