One of the main reason why players choose to play slots, instead of more conventional casino games like Roulette and Blackjack, is the fact that slots offer bigger jackpots. And while the prizes in conventional games are fixed and the maximum amount that you can win is rather small, slots give you the opportunity to hit a massive jackpot, with prizes that often exceed your original stake by hundreds, or even thousands of times.

That being said, slots are more volatile and more unpredictable. With slots, it is all about luck, you cannot influence the result, or there is very little than you can do. Just as not all slots are made the same, the jackpot prizes that they feature may differ as well.  In this guide to jackpot slots, we’re going to cover all different types of slots jackpots, how they work, how likely you’re to hit any of them, and all other relevant issues regarding slot machine jackpots.

Every slot game, whether it is an online slot or a game that can be played in a brick and mortar casino, features a jackpot and the word generally refers to the highest prize that you can win. But, as all slots aren’t the same, the types of jackpots that you may win also vary.

In the most basic sense of the word, when we say jackpot we usually mean the biggest possible combination of the most valuable symbol. In most cases that means five instances of the same symbol across an active payline. In some games, a combination consisted entirely of wild symbols pays more than the most valuable regular symbol, whereas other games have a regular game symbol which awards the highest jackpot in the main game.

The highest main jackpot is usually displayed on the paytable, but you should know what the table shows. For instance, the prize amount may be shown in coins, or it may be displayed as an actual cash prize based on your current stake rate. So, for example, if the jackpot is 10,000 coins, and you play with a coin worth 10p, in that case the jackpot would be £1,000.

So, you always need to take the stake amount into consideration, because jackpots depend on it. Basically, when you wager a larger amount of money, you can expect a larger jackpot. That’s how it works.

While the term jackpot can refer to the single largest win in the main game, it can also refer to the largest amount of money that you can win in the game, including the bonus games. In many cases, when you trigger a bonus game you will get a number of spins, free spins, that are played with the same wager that was used to trigger the bonus game.

So, it makes sense to count all funds won within the bonus game as a single jackpot. In many cases the maximum theoretical payout within the bonus game exceeds by far the amount that you can win in the main game. However, you should know that this maximum win is only theoretical. Namely, a free spins bonus usually includes multiple spins that work just like the main game spins, so you would have to win the maximum possible prize during each spin in order to win the maximum theoretical jackpot. 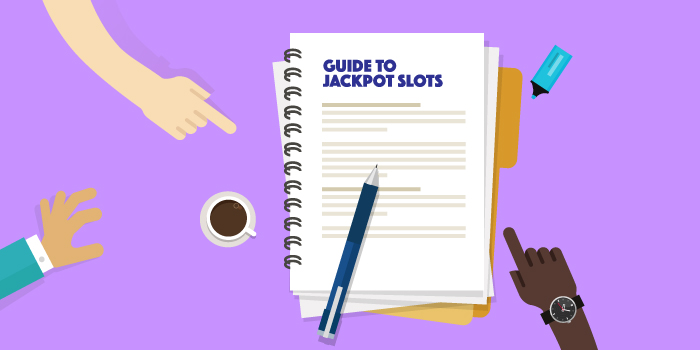 So, let’s assume that the fraction of every wager that goes towards the jackpot is 2.5% and you wager £10 on the game. In that case 25p will go into the progressive pool. All casinos that offer a particular game, also participate in the pool, i.e. their players participate. A jackpot usually seeds at a particular amount, say £500,000 and that is the minimum prize that can be won. Then every penny above £500,000 is added to the pool and the player who manages to hit the progressive jackpot gets the full amount that was in the jackpot pool at the moment when they got the jackpot.

Briton Jon Heywood managed to hit a jackpot worth £13.2 million in October 2015 and thus entered the Guinness Book of Records for the highest online slot jackpot. Heywood who was 26 at the time, played Mega Moolah at Betway Casino.

Few other players have won prizes over £10 million, and there have been plenty of ‘slots millionaires’ over the years, and there will be plenty more in the years to come. That being said, remember that in most cases you will need to wager the maximum possible amount to be eligible to win the progressive jackpot and also that progressive games sometimes have lower RTP compared to conventional online slots.

If you like to try your luck on some of the best progressive jackpot games, choose one of our featured SlotsWise casinos and claim a hefty welcome bonus before you start playing.