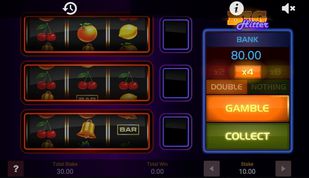 Play the Big Hitter slot for a chance to win three prizes of up 1000x in the best outcome from a single spin.

1x2 Gaming had ventured into retro and classical slots before. They have few games in the retro style that look similar to the game at hand, where the reels-set consists of single rows with three reels.

The way that the reel-set works is by combining any occurring wins on any of the three individual sets. Each press on the play button spins all three reel sets in which the wins are made of three matching symbols. That makes the gameplay straight up, as Big Hitter is a classical fruit slot in its core.

One thing that is certain is the absence of wild and bonus symbols. The paytable consists of six symbols and that makes it to the point. Get three of the same and score a win. If you decide to gamble the wins you stand a chance to win multipliers of up to 10x.

In terms of the graphics design we have simple graphics and many moving parts, besides the reels. In other words that aren't any animated bits, so we only get the fruit symbols, BAR and bell and the reels and rows that are surrounded in a neon-like frame.

Quite unexpected is the musical theme that 1x2 Gaming decided to include in Big Hitter slot. They could have gotten away with a completely silent slot, perhaps some analog slots machine sounds. Instead there is an upbeat synthesizer which is fine being left with the sound on.

How to Play Big Hitter Slot

We couldn't say it in terms that are any simple than this. The game at hand is simple and straightforward at that. The Play button is a big green rectangle located in the box which is to the right of the reels. Press this button once to spin all reels.

Amazingly, Big Hitter slots doesn't have an autoplay button, so there is no way watch the show without lifting a finger. The game makes you get involved in it, precisely because of the gamble feature which starts as Double or Nothing.

A paytable is available with all of the symbol payouts. Access it by selecting the question mark button in the bottom left corner. In the up right corner is the button for sound.

How to Win Big Hitter Slots

The paytable shows amounts that are quite decent. The least lucrative symbol are the cherries.

These pay x2 baseline for a win of three. The oranges pay x10 the bet. The bells pay x50. The lemons are x5 and the blackberries pay a neat x25.

The most lucrative symbol in Big Hitter slot is the BAR. Three of these and the prize to win is x100.

All of these amounts are for a plain win, that is, a win without any of the multipliers which are factored-in if your gamble progresses through the three stages.

This is a feature that isn't random. Players can choose it following any payout. There can be a maximum of three payouts from a single spin if Big Hitter draws three matching symbols on each of the three rows. In the event, the gamble mode will add the multiplier to all of the rows.

We described the bonus feature in part. Basically, you need a lot of luck to win a big win. These are possible if you can reach the x8 level. Even better, score any payline wins consisting of the highest paying symbols and the added multiplier of x4 or x8 will do a wonder for your balance.

To play the Bank feature simply hit the Gamble button following any win. The display shows a blinking light that moves between Double and Nothing.

If it stays on Double, you get the multiplier and Big Hitter slots lets you decide if you want to gamble those winnings for a chance to get x4 on it. If the game gives you that win, the last stage can lead to the ultimate multiplier of x8.

The slots experts at 1x2 Gaming have made this game available to the general public. Also, online casinos that make their slots available in practice mode are another way to test the game.

True, there aren’t any bonus features or wilds and that lets you view the game from another side: there is more room for the six symbols. With a top potential payout of 30,000 in the most optimal of outcomes, the game does indeed offer chunky prizes.