Queen of Embers comes with a layout of three rows and five reels. These can trigger wins on consecutive reels and regardless of the symbols' position on the rows. In terms of technical stats, the game has a theoretical return to player of 96.02% and maximum payout potential of 11250x multiplied by the triggering bet. 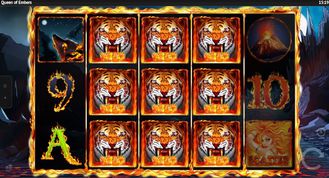 1x2 Gaming are the slots experts behind a game about a queen who resides inside the fiery world of volcanoes. This is probably the only game that goes into the theme and makes a teriffic job from it. The players will find a dynamic gameplay on Queen of Embers slot, which has 243 ways to win that can trigger wins consisting of three or more matching symbols.

Some players will feel at home on the reels of this game. The graphics are amazing, offering a look inside a lake of fire and symbols that are as equally doused in it. One of the new options in 1x2 Gaming slots is the possibility to buy the free spins bonus, which does come at a high cost on the bet. Nevertheless, the bonus can trigger in the base game too, creating possibilities for a more engaging adventure.

The theme of this game is steeped in flame and features a number of animals, Phoenix feathers, fireballs, minerals and the Queen of it all. We must admit, the idea behind the theme has been executed excellently. Perhaps there are few games out there that bring us into a similar realm, however, Queen of Embers slots does it better.

The game has lots of animated parts to it. This is especially true for the picture symbols, all of which come to life and are engulfed in flames when they become part of a winning outcome. Probably the coolest visual effect comes with the tiger symbol, as well as with the Queen of Embers scatter.

Overall, it is a visually stunning game that plays seamlessly on mobile and personal computers.

How to Play Queen of Embers Slot

Before you start playing the game, the first order of business should be to find your way around the controls and buttons. Players who are familiar with games by 1x2gaming will have no trouble because the developer has been consistent with its layout, although, they did introduce a minor novelty.

The bets can be configured by selecting the coin stacks symbol in the bottom left corner of the screen, instead of selecting through the amounts at the bottom of the reels. Pressing the said button opens up a window at the bottom, with values between 20p per spin and £20.00 as maximum

Queen of Embers slot has the spin button located in the bottom right corner. Above is the button for autoplay, which lets players choose from the automatic spins presets. Optional settings include setting win and loss limits, as well as stopping the game once the bonus feature is triggered.

The menu button is on the left side of the reels and in the upper right corner, there is a shopping cart button where you can purchase the guaranteed free spins bonus.

How to Win Queen of Embers Slots

Three matching symbols on a payline spell out a winning outcome according to that symbol's payout level. The game can trigger multiple payouts on a single spin. A wild symbol helps to make winning outcomes and triggers stacked wilds in the bonus feature.

In terms of payouts, the most valuable symbol on Queen of Embers slot is that of a howling wolf, paying 200x multiplied by the stake for five of a kind on the reel-set. The volcano pays 140x for five, the crystals pay 100x, as do the fireball and the feather.

The game doesn't have the best payout structure compared to a lot of slots, but the bonus feature balances this out by creating favorable odds for the potential big win.

The bonus is triggered with three, four or five scatters, which bring about 8, 12 and 16 spins in that order. The bonus feature can trigger again when another set of three or more fiery queens land on the reels.

The wild symbol is a crucial part of the bonus, as it comes in full stacks on all except the first reel. There can be as many as 75 stacked wilds throughout the bonus feature.

1x2gaming are known for making their online slots available as demos, which enables players to try out this game with free credits and get a feel how it plays.

The game has a huge payout potential, but the base game doesn’t add up, even though the wilds can be persistent. That means, it is the bonus feature where the players can enjoy best ods in landing a big win.

Discover the Queen of Embers slots by claiming a welcome offer right from this page and play at top-rated online casinos.

Charlie Chance in Hell to Pay