Play The Da Vinci Device slot to spend time with the genius of nature who left a permanent mark on the world with his art and inventions. We have five reel slot game with three rows and a theoretical return to player outcome of 96.00%. The free spins bonus is produced by unlocking three to five of the scatter symbols, which cause the device to turn up multipliers as high as x4. The top symbol payout is 400x. 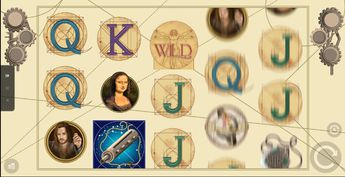 Leonardo Da Vinci has inspired countless thinkers since his creations, drawings and paintings become known to the world. Play The Da Vinci Device slot to experience this thrilling slot game.

Although there is a slot game taking his work as its theme, called Da Vinci Diamonds, we feel that another title does more justice to the idea of this genious should have another slot game. In the Da Vinci Device slot we have 1x2 Gaming coming up with a five-reel slot that offers 243 ways to pay. The game has an amazing layout and comes with a number of valuable symbols, as well as a bonus feature.

How to Play The Da Vinci Device Slot

The tinkering with machines starts with a low bet of a quarter of a pound sterling and goes through a number of increments before reaching the ultimate wager of £100. All of the reel action occurs on five reel, across of which are three rows, and a pre-megaways 243 ways to pay, which are always active and in that precise number.

Set the bet per spin by using the cog that is labeled Coin Value. This sets the coin value and the cog on the opposite end is for the bet levels - of which there are ten. Each level multiplies the coin size that many times, in order to give the players a wider range between the smallest and the biggest bet. The interplay between these two settings results in the final bet per spin.

Those players who want to experience the game without having to press or click on the Spin button for each turning of the reels, there is the Autobet button. This is essentially the button that sets up the automatic spins. Another button is for the trigger-happy players out there, although we don't advise using it on a whim, but it's there are if a huge payout has been given then why not use the Max Bet button once or twice.

How to Win The Da Vinci Device Slots

The game's paytable can be accessed from the bottom left corner of the screen. Players who want to check out the symbol pays will find good use in the paytable, as it provides additional information too: what symbols trigger the bonus features, information on the multipliers, gameplay details and rules.

The Wild symbol in The Da Vinci Device slot is, not surprisingly, the portrait of Leonardo da Vinci himself. That symbol is followed by the most valuable one in the game, which is an astrolabe-type of mechanism that pays 400x for five on a payline. A young Leonardo da Vinci is also there with a symbol of his own, paying 300x, as is a drawing of his famed and unsuccessful flying device.

The Polyhedron and another, this one winged, flying machine are two of the last picture symbols belonging to the high-paying symbol category. The portrait of Mona Lisa pays 250x for the highest instance of matching symbols.

The slot game gets its name from the machine which is to be put together by collecting its five different parts. Each part appears only on a single reel. Notice the locks underneath each of the reels - these will unlock when its corresponding part of the Da Vinci Device will turn up on that reel. When all five of them do, the result will be a completed device and a Da Vinci Device free spins bonus granted.

The bonus feature itself concerns precisely the same device. It is a cylinder containing multiple cylinders (the reels perhaps) that is placed inside a nice wooden box. The three reels contain a number that will determine the free spins, a multiplier on the winnings and the special symbol of the game’s standard symbols. This device provides a multiplier to the winning outcomes during the free spins mode.

The game's wild symbol is represented by the Vitruvian man (human figure with arms and legs stretched out) and if during the free spins the wild symbol is part of a winning combination, the multipliers (between 1x and 4x) will boost the win.

The game design is absolutely terrific. All of the symbols are top quality. You can just feel how they’ve been drawn by free hand and then rendered on the computer to a maximum effect. The result is an array of symbols that impress and fit within the gameplay and the sound score. What is more, when part of a winning combination, each symbol jumps to life, that is, becomes animated in an impressive manner.

The Da Vinci Device on Mobile - Apple, iPhone or Tablet

1x2 Gaming are slots experts of many years and they know how to produce a game. This is one of the best and brightest examples of their craft, and believe it, it fits perfectly on mobile and tablet devices. As long as that device is android or apple, the game will launch. A way to know for sure is to ensure that you are playing at an online casino that can launch on mobile.

Note: all of the online casinos on this page are just like that, and you don’t need to download any apps to play. By the way, did you know that you can claim a welcome bonus to play The Da Vinci Device slot right from this page?

Both of these slots play on three rows and five reels, but are completely different in nature. While Da Vinci Diamonds is a high-variance slots that can deliver rare big wins, the Da Vinci Device slot is a medium variance game that can deliver winnings across the spectrum, as well as big wins. In another view, this game has far superior graphics compared to the clunky Diamonds and is also a lot more enjoyable for its gameplay.

This game impresses with its graphics, but all the rest that we require is there: decent symbol pays, a bonus feature and the possibility of a x4 on the bonus feature winnings. Least to say, it is a pleasure to play.

Claim a welcome bonus to play The Da Vinci Device slot at one of the online casinos on this page.