In the base game, the reel-set consists of five reels and four rows which spin across 25 always active paylines. The game design blows the lid with fascinating visuals and cinematic cuts, which may be fittingly appealing with the young audiences, but let's not constrain ourselves because this is a full-blown slots adventure. 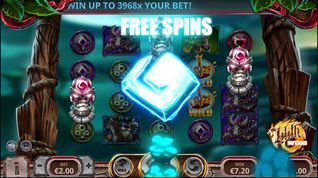 Enter the battlefield against some fierce monsters and slay them for a chance to win up more than 100,000 on Lilith’s Inferno slots.

Have we got something new coming from the kitchen of AvatarUX Studios. The company has produced an online slot that verges on becoming one of those open-world role playing games. Lilith's Inferno slot comes with a reel action that skips into the world of battling mages and ogrish creatures, as part of the bonus feature.

Because of the lengthy battles, the reel adventure is protracted, so anyone looking for a quick play may experience time slowing down while just several spins have been made.

In terms of the win potentials, we have a top-paying symbol with 24x on the winning bet and a theoretical maximum prizes, which can result from a single spin, of more than £100,000 or your currency equivalent.

AvatarUX Studios are a new online slots producing outfit based out of Hong Kong and it appears they went ho holds barred in creating their very first game. Lilith's Inferno slots is a stunning slot in terms of the visual experience, which is immersive, to say the least.

The characters are well-drawn and thought out so as to conform to a story about an epic fight between monsters. Lilith is the protagonist and the inferno is her home. All runs smoothly in terms of the graphics, including the battles. On the other hand, the game is not as fluid because of the frequent cinematic events in the bonus feature.

How to Play Lilith’s Inferno Slot

Your adventure through the optics of this electrifying world can begin once you've selected the bet per spin. This can be done by working the minus and plus buttons in the bottom left corner of the screen.

To send the reels spinning across all 25 paylines press the round blue button once, which is going to deduct the selected bet once.

To the right of this button on the Lilith's Inferno slot is the autoplay. Select it to open up the setup menu which reveals a list with presets for the automatic spins.

Players who want to take a look at the symbol payouts and how the bonus feature is triggered can click on the 'i' button in the bottom left corner.

How to Win Lilith’s Inferno Slots

Winning outcomes are created with three or more symbols of the same kind when they fall on one or more of the game's paylines. The event needs to occur with symbols starting on the leftmost reel and on towards the right.

The most valuable symbol in Lilith’s Inferno slot is the fierce bear monster with 24x on the bet when five of the same fall on a line. This symbol is followed by an obsidian minotaur which pays 20x on the winning amount.

The drawn with the enormous sword pays 16x and the gorilla does the same amount. The rest of the symbols are the card suits, which pay between 4x and 6x for outcomes of five of the same.

The game comes with a free spins feature that is more engaging than the usual. It is interesting how the number of free spins is determined. First off, the feature is triggered when three, four or five crystal gorilla skulls fall on the reels.

In the event, the player takes 'jabs' at the monster at large, where each strike counts for a spin, so with three triggering symbols the number of free spins can be between 10 and 20; four triggering symbols can get the players to 15 to 30 free spins and in the last instance of five scatter/bonus skulls the reward ranges between 25 and 50.

Lucky players who land the lucky VS symbol in two instances on the reel-set will get to fight one of the bosses. If the boss is defeated his symbol becomes wild and remain as such for the remaining free spins. Also, each victory adds two free spins to the set.

Players who are eager to check out this new developer and the awesome game they had released through Yggdrasil’s platform will certainly be able to do so by playing the free play demo.

There is a lot going on in this game so it’s quite pleasing that it offers an overall dynamic reel adventure. Those who love such online slots plus and into epic battle themes, will surely rejoice. Above was mentioned that the only bit of downturn is during the bonus feature when the game tends to take a bit longer to load, but that is of trivial importance compared to the rest.