Do battle with the gnarly troll and play for a chance to win up to 5000x on the bet. Troll Hunters 2 is a far cry from the first release. Much improved and with extra features, the game offers multipliers and big symbols. Consecutive wins can trigger multipliers in the base game and potentially result in a big win from a single spin. 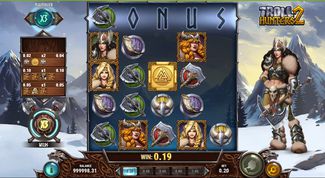 Check out the grid-based Troll Hunters 2 slot, its multiplier wilds, free spins and potential wins that can reach 5000x on the bet.

Play'n GO have a thing about trolls and they certainly know how to create the world that's their natural home. Following on the success of the previous release the Troll Hunters 2 slot is in store to offer the established and sought-after grid-based action on five horizontal and five vertical reels.

The game is fully stacked with extras that can help the winning swell up. These include wild multipliers, free spins, colossal multiplier symbols re-triggers on the feature and more. Anyone who is into online slots that offer more than just chances for a payline win will certainly take to liking a game with diverse features.

The payout mechanism of Troll Hunters 2 can deliver wins with three or more symbols of the same kind, when they fall in a row horizontally or vertically. The same symbol can occur in a win outcome in another location on the slot. Furthermore, because it is a collapsing wins game, the win combinations are deducted from the reel and the void filled with fresh symbols.

The optimal win outcome that can result from a single spin amounts to 5000x on the winning bet.

A game that deals with warhammers and axes requires a set of characters that could really wield these. Well, the slots experts at Play'n GO have decided for a she-viking band to fill the ranks of Troll Hunters 2 slot.

Each of the characters represents a wild symbol and the most concurrent and active wild figure appears on the screen and to the right of the reel-set.

In the manner of similar releases by the same company the symbols are well-drawn but static on the reels, except in the event of a win, when those symbols are treated with a lightning effect.

A musical theme offers an epic component to the reel adventure, and to this end, the makers of this game have went out of their way to secure a fitting orchestration.

How to Play Troll Hunters 2 Slot

Play'n GO have by now settled with the arrangement of the controls and in the case of Troll Hunters 2 we have the familiar setup.

The bets can be selected from the sliding scale at bottom of the screen, just below the reel-set.

To set the reels spinning press the big green circle in the bottom right corner. To the right of it is the orange autoplay button.

Players who want to kick back and relax while Troll Hunters 2 slots does the work can easily set the process in motion.

How to Win Troll Hunters 2 Slots

Like we said, wins are made with three or more symbols of the same kind and a winning outcome is extracted from the reel-set.

The game's character symbols and the wild medallions are the most relevant and rewarding symbols of Troll Hunters 2 slots.

Highest-paying is the golden, interlocked triple triangle symbol which pays 50x on the winning bet when five of the same symbols fall in a row.

This symbol is followed in value by the she-vikings, where each one pays a prize of 10x for five in a row. A win consisting with any of these pays 5x.

The rest of the symbols are three weapons, a Viking helmet and the famed gjallarhorn.

All of these symbols pay rather decent amounts on the win, but the real magic happens with the help of the multiplier wilds and the bonus features.

One of the extra features revolves around the shield and waraxes meter that can be found on the left of the screen. Scoring consecutive wins up to a certain number results in one, two or three sections of the sheild getting filled.

When the meter is filled the game goes into a frenzy of sorts and adds one or two multiplier wilds, which can result in further consecutive wins.

The bonus feature is triggered when a number of consecutive wins clears the BONUS letters that are in the middle of the grid. In the event, the players can choose one of the three she-viking options for the extra feature in the free spins.

A troll symbol which takes up 2x2 positions on the grid is then added to the game and a multiplier meter is activated which has five levels. Each time the shield is filled a Win Spin retriggers the bonus, while the multiplier remains.

For all the players who are into epic-themed online slots, this is the game that can be played with free credits on mobile or computer as Play’n GO have released it as a demo play slot.

A game that is stacked with features that can trigger series of successive outcomes is one to be considered at least for several casual spins. A prize of 5000x isn’t at all modest, especially considering the possibility of getting even to the middle, from a single spin.