Nobody could say exactly why Ancient Egypt is such a popular theme for online slots. There have been dozens of games based on this theme and online slots developers show no sign of stopping, they keep creating new Egypt-themed games. It is pretty obvious what you can expect to see on the reels in such games – pharaohs, pyramids, sphinxes, hieroglyphs and more. Looten Khamun slot is one such game, as can be inferred from the title which is obvious wordplay on the name of one of the most famous pharaohs – Tutankhamun. 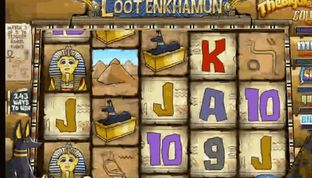 Nobody could say exactly why Ancient Egypt is such a popular theme for online slots. There have been dozens of games based on this theme and online slots developers show no sign of stopping, they keep creating new Egypt-themed games. It is pretty obvious what you can expect to see on the reels in such games – pharaohs, pyramids, sphinxes, hieroglyphs and more. Looten Khamun slot is one such game, as can be inferred from the title which is obvious wordplay on the name of one of the most famous pharaohs – Tutankhamun.
This game was developed by Party Gaming, and although you may not be familiar with the name, as this provider isn’t as popular as NetEnt or Microgaming, but you will find their games at plenty of online slot sites, including some of our top choices, listed to the right. So, if you’d like to try your luck on one exciting Egyptian themed game, just pick your casino, register then claim your bonus and start playing Looten Khamun slots.

Visually and graphically this is a quite extraordinary game and it is clear that the graphic designers put a lot of effort into the symbols and the overall layout. You will notice how the buttons are incorporated into the screen, it doesn’t even feel like the control panel is separated from the reels.
The scenery and the background on which the reels are placed is quite in accordance with the theme. In fact, as we mentioned above, even the buttons are placed right on the Egyptian landmarks placed below the reels.
There are plenty of objects on the screen, even though the reels occupy most of it. However, it is not too crowded at all. Earthy shades and nuances dominate, which is not surprising considering that most of Ancient Egypt was desert.
In terms of layout the game features five reels and three rows, so in that respect things are pretty much standard.

We already mentioned that the buttons are placed on the graphic elements which are part of the scenery, but it is not too difficult to spot them. The sphinx placed to the right of the reels is the spin button and that’s pretty obvious considering that the word ‘spin’ is written right below.
To the left you will notice the total bet button which is quite handy, as you won’t have to adjust the wager per payline or per bet level, instead you will be able to set your total bet. That way it will be a lot easier to calculate the actual price of a spin and you’ll be in a better position to determine how much you should actually wager. Beat in mind that it is not suggested to wager more than 1% of your total bankroll per spin.
The game features five reels and three rows, but the number of paylines is quite high – 243, a lot more compared to other slots, so that’s why the stake isn’t calculated per line. You can play Looten Khamun slots with a minimum of 20p per spin and up to a maximum of £500. During the bonus games, more symbols appear on the reels and that increases the number of winning combinations to a maximum of 1024.

There are quite a few curious symbols in this game, starting with the standard card deck low value symbols – 9 to Ace which pay less than the thematic symbols. Speaking of thematic symbols, you will see pyramids, the emperor Tutankhamun and more. All symbols are animated, and the animations are activated after a winning combination.
You will need at least three instances of the same symbol across an active winning combination for a win. Since there are so many winning combinations their layout and the way they’re arranged across the reels is quite different from the standard layout in games with fewer winning combinations.
In addition to the standard symbols, there are a few special symbols that play specific roles. First is the wild – the game logo and it can replace all symbols, except for the bonus symbol. Five hieroglyphs have the role of scatters and each can appear only one a particular reel, so there’s one symbol that appears on the first reel, a second that appears only on the second reel, and so on.

As soon as you get a minimum of three symbols on the reels, the bonus feature will be triggered. In this game you are taken straight to the treasury where you’ll assume the role of an archaeology professor who is on an excavation journey. The main goal is to reach the throne – the most desired object in this bonus.
Throughout the bonus you get to choose various plates which can result in significant winnings. You may win free spins, multipliers and a lot more. If you trigger the free spins game the number of rows is increased to four and the number of paylines is also increased with it. You can trigger a minimum of six and up to maximum of 30 free spins and the maximum multiplier rate is eight times the amount you’ve won. However, scatters don’t appear during the bonus rounds.
Looten Khamun slot features five progressive jackpots and if you wager more, you will have better chances at winning the jackpot, which is pretty much the case for many progressive jackpots.

Looten Khamun is one exciting online slot game. It features an interesting theme and quite extraordinary graphics. Even though Ancient Egypt is a common theme and there are plenty of slots with a similar story, gameplay and symbols, Looten Khamun really stands out and we have to admit that Party Gaming did a pretty good job with it.
If you like the idea of going on an excavation trip in Ancient Egypt, register with one of our casinos, claim your special bonus and start wagering today.