The game comes with a reel set of three rows and five reels that spin across 20 paylines. Winning outcomes can be made for at least three matching symbols and the smallest bet is 10p per spin. The Pick N Mix part of the game enables the player to select one of the extra features. The game has a theoretical return to player of 96.00% and medium to high variance. 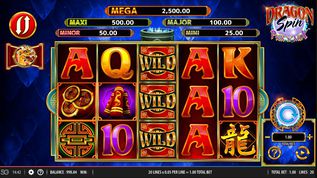 Barcrest and SG Digital have made a Pick 'n Mix slot that continues the idea of the Rainbow Riches Pick n Mix slot. The theme of this game, however, couldn't further away from Emerald Isle.

Players are taken to the sacred mountains of Ancient China which is a land of dragons that can award fierce extra features. Dragon Spin Pick n Mix comes with five jackpot tiers of which the most valuable is worth 2500x multiplied by your bet.

In terms of gameplay features, there is a standard wild symbol and multiple features. Those who play Dragon Spin Pick n Mix can select one of the following: Symbol Eliminator, Fortune Eggs, Peristing Wilds, Goliath Reels and Expanding Wilds.

In terms of graphic design the game is a signature release by Barcrest and SG Digital that features all of the niceties one can find on slot games that are destined for the casino floor.

Players will find this to be an engaging game also because of the graphics. There are animated features on Dragon Spin Pick n Mix slots that can liven up any spin of the game.

There are five high-paying symbols and five low-paying symbols. The former category consists of a Chinese character, a red lantern, three gold coins, scrolls and the pattern that represents fortune.

The low paying symbols consist of the four royal cards plus the ten card.

The game can begin by first making a selection of the available extra features. The game is called pick and mix because players can select up to three features from the available five. This can be done by pressing the double arrow button on the left side of the reels.

To start spinning the reels press the white orb button in the bottom-right corner of the screen. Players can play Dragon Spin Pick n Mix slot by selecting the autoplay button which is the button to the right from the set of two circular buttons that are in the same area with Spin. You can select from the automatic spins presets and add additional options.

The game comes with a paytable that enables you to view the symbol payouts and information about each of the bonus features. Press the question mark button to open the paytable. Last but not least the game has five jackpot tiers whose values are displayed above the reel set

Players can land cash prizes for three or more matching symbols. These outcomes must occur from left to right and post on one paylines. Wins across multiple paylines can also occur from any spin.

In terms of payouts, Dragon Spin Pick N Mix slot has the pattern symbol of five blessings known as Wufu. This symbol can pay 20x, 80x and 400x multiplied by the payline bet for three, four or five symbols.

The bonus feature is triggered with three matching special symbols that can land on the three reels in the middle. The bonus and dragon symbols are scattered. The respective Dragon Spin bonus is triggered with the color of the dragon that matches the bonus, which can only land on reel four.

Last but not least, there is another bonus feature called Dragon Pots. This bonus is triggered when a pearl symbol stops on reels one and five. In the event players get to choose from the pearls. There are 15 options and five of these conceal the jackpot prizes which are 25x, 50x, 100x, 500x and 2500x.

Players can try the game with all of its features as a free play demo slot. This is only possible to do at online casinos that host games by Barcrest and SG Digital and have them available in practice play mode.

This is another game by these companies that is destined to dominate the casino floors across Vegas, Macau and other exciting places. Not only does it come with multiple different features, but there is also a jackpot bonus game that can land the lucky player a neat 2500x.

Discover the Dragon Spin Pick N Mix slots by claiming a welcome offer right from this page and play at top-rated online casinos.