Dragon Spark comes with five reels and five rows that can spin across 3125 ways to win, however, this number rises as new rows are added during the feature. Payouts are made on adjacent reels with at least three symbols of the same kind. The game has a high variance and a theoretical return to player (RTP) of 96.99%. 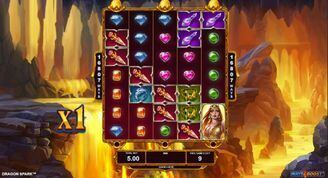 What we have here is a curiosity coming from the Playtech Origins studio. Dragon Spark slot is an epic fantasy-themed game with all the markings of their Kingdoms Rise series, but nevertheless, it is a game in its own right. The game takes the players on an exciting reel adventure with dragons, swords and a vibrant princess who is the game's most valuable symbol.

Dragon Spark slot has a thrilling base game action, however, the reel adventure with the dragons can be had in the bonus feature. This mode is the part of the game where players can get new rows to add to the reel-set. The payout system enables multiple wins resulting from the same spin, and there is a wild symbol that substitutes for all of the standard symbols of the game.

The graphic design is what can expect from the Playtech Origins studio. They make marvelous slots and this one of the standard examples.The theme is an icy world ruled by a dragon and by a princess that holds its reins. The symbols match the theme to the fullest with low paying symbols comprised by various gems and high-paying symbols comprised by a crown, a dragon ring, a dagger and the princess.

Dragon Spark slots is visually stunning, as there are multiple video effects and cutscenes. The dragon wild casts its fiery effect on the reel-set, engulfing symbols in fire. Big wins are celebrated in much fanfare, as the explosion of coins covers the entire screen. The background music is an epic theme that has cinematic qualities that complete this reel adventure.

How to Play Dragon Spark Slot

the production studio have included all of the controls and buttons in the bottom of the screen. The Ways Boost indicator is in the bottom right corner of the screen to mark the style of the cascades payout mechanism as made according to Playtech Origins.

To start the reels spinning press the play button found underneath the fifth reel. To the left of it are two buttons, one is autoplay and the other is Turbo Mode, which causes the reels to spin and stop faster, for a gameplay that is more dynamic than the usual.

Choosing your wager is a quick task. Select the amount by pressing the minus and plus buttons in the bottom left area of the reel-set. The Dragon Spark slot gives a wide range of bets, as players can start spinning with as little as 10p per spin. The maximum bet is a high stakes adventure that ought to be off-limits for most players.

Dragon Spark can be enjoyed in its automatic spins mode. Pressing the Autoplay button opens up a number of presets, which cause the reels to spin on their own that many times, deducting the bet amount once for each turn.

How to Win Dragon Spark Slots

Winning outcomes in this game are made with the cascading/avalanche drops system. At least three symbols are needed to trigger a win, while four and five symbol wins are more rare but pay bigger prizes.

When there has been a winning outcome, the symbols disappear and their positions are filled by a new drop of symbols. Dragon Spark slot has a wild symbol that can substitute for any of the standard symbols.

The princess is the most lucrative payout, especially with five of the same, however, this isn't going to bring more than 10x, as the cascading wins can cause multiple payouts resulting from the same bet.

The bonus is triggered with three scatter symbols. When that happens each cascading win in succession adds one row to the reel-set. That way the game can play across 16807 ways to win. This arrangement on the reel-set is kept if the game retriggers the bonus feature.

The game is available as a free play demo slot, which enables the players to try it with free credits and decide whether to play with real money or not.

Playtech hasn’t announced yet the maximum payout but considering they are the providers, we don’t suspect it’s going to be at least below 2000x multiplied by the bet. All else is typical, including the variance and the RTP. All in all, this is a solid reel adventure much like the Kingdoms Rise series.

Discover the Dragon Spark slots by claiming a welcome offer right from this page and play at top-rated online casinos.