Discover what may bring the subsequent falls on the Winfall slot. This is a Barcrest game with five reels and the falling reels type of a gameplay. There are 23 paylines and a bonus feaure where the players can spin the wheel of fortune towards a maximum prize of 500x multiplied by the triggering bet. The game's theoretical RTP is at 96.00% 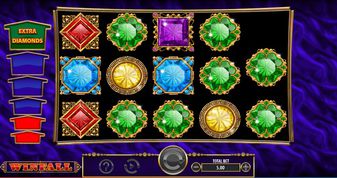 Play the Winfall slot for a chance to bet at the highest wager and win the game’s top payout of 25,000.

A game of diamonds could turn into a regal affair, especially on the Winfall slot. Filled with gold plates encrusted with fist-sized diamonds, this is the idea of royalty playing canasta in a drawing room with amber molding and other forms of luxury. Indeed, this is look and feel that we get from the Winfall slot, courtesy of Bally and SG Gaming, that is, Barcrest.

The game has five reels and three rows that spin across the total of 23 always active paylines. Winstar has a base-game bonus feature that can result in multipliers that can attach to the winning outcomes. There is also the possibility of all of the game's reels and rows to get covered by a single symbol, which results in a huge payout relative to the bet.

So we can see that even though it lacks an actual bonus feature, like a free spins feature, the Winfall slot still has a lot to offer in terms of gaming entertainment. Although the graphics aren't that much of a thrill, this laid-back slot does have a gauge meter that leads to the Extra Diamonds outcome.

Let's check out the details as to how to get on this slot and the potential winnings, as well as where to claim a welcome offer. We just hope that you can withstand or quickly disable that horrendous piece of ‘muzak’ in it.

How to Play Winfall Slot

You can start the game by pressing the spin button. The diamonds will spin and retreive a set of symbols that may or may not form a winning outcome. To make sure that you don't bet on the default amount, see what the sum is in the Total Bet window and change it if it doesn't work for you.

To change the bet work the minus and plus buttons in the bottom center area of the screen. The bets start with the smallest amount of £0.10 per spin and they rise in small increments before reaching £2.00 per spin. Somewhere around the rather high £50.00 bet, the increments will start to skip by whole round 100's, thus resulting in the several high-stakes bets that end with £500.00.

There is certainly an autospins option in the Winfall slot. It is located to the left of the green spin button and clicking it will open a window that has the number presets for the automatic spins. Click the green downward arrow and there are additional options which allow you to select a single win limit and a single loss limit. Hit start to begin and hit the autopin button again to stop.

How to Win Winfall Slots

The game's paytable reveals the symbols and their pays, as well as the features and game rules. Access this source of information by selecting the question mark. There, the most valuable symbol is revealed to be the solar disc. Since the paytable is dynamic and displays the symbol wins in raw cash, we shall select a bet of 5.00 per spin to view the potential pays.

Winfall slot is a cascading falls type of a slot game, which means, the winnings are paid out for the symbol wins and additional winnings can occur on the same bet. Those symbols that are part of a win will disappear and their place will be filled by a new set of symbols.

With each turn that results in a win, there is a subsequent win and that lights up the arrows on the left side of the slot, starting from the bottom. The more wins there are, the more arrows will be activated. When the sixth arrow turns on following win number six, the Extra Diamonds Winfall bonus feature will be triggered.

The bonus has a disc with 16 wedges that contains 12 cash amounts and four multipliers of x2. Spin the wheel to have it stop on one position. If there is a cash win from that spin, the bonus round is over, but if there is a multiplier of x2, then all of the cash plates become double. This could result in subsequent doubling of these amounts, towards a maximum cap at 500x multiplied by the triggering bet.

The game has a rather solid theoretical return to player outcome which is 1% above the average. At 96.00% this is a solid game, especially regarding the bonus feature which could lead to a 500x on the winning bet, which again, can stretch anywhere between £0.10 and £500.00 per spin.

The Barcrest, SG Gaming and Bally groupation have been making slots for the casino floors for years. No wonder every one of their releases comes with a potentially thrilling as well as potentially rewarding experience. Check out the Winfall slots and see if that bad tune is there to chase away those who judge a book by its cover.

Play this game or choose from many others at one of the online casinos on this page. Claim a welcome offer to start today.