Play a brand new and innovative game by BetSoft that covers all of the gem needs in the world. The Gemmed! slots comes with nine horizontal and nine vertical reels that turn up 81 paylines. This isn't a Megaways slot even though it has all tell-tale signs of it, but it may be something even better. We shall see once the game is released in September, until then it's Bonanza! time. 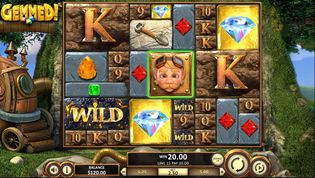 Discover a brand new game by BetSoft which brings innovation and excitement. Check out the Gemmed! Slot.

Spin the reels and dig some gems on an exciting online slot developed by the experts at Betsoft. We have here a cheerful mining-themed game with expanding symbols and shifting rows that plays on - no, you haven't guessed it - 81 ways to pay. Much to the chagrin to some people and to the cheer of others, the Gemmed! slot isn't a megaways affair.

The reel-set arrangement is a grid of nine horizontal and nine vertical lines that are ever so restless. As the symbols are spinning and stopping they can nudge over both the reels and the rows, so the players can get winning outcomes even when the arrangement of the symbols may suggest otherwise.

The pays in this game are made according to a new system developed by BetSoft called MAXPAYSTM. The maximum win on Gemmed! slot is yet to be discovered as well as the method in which the payouts are generated. This creates even more excitement as, we remember, it was the gem-themed Bonanza slot that gave way to the now ubiquitous Megaways slots action.

The graphics design on the Gemmed! slots is pretty solid. We can see beautiful layout of the background where a contraption is hemmed into the wall of a cave that leads into the mine where the gems can be discovered and brought out.

The second category of the game's symbols are the high cards and these are simply plastered on a background of sheer rock. There is animation breathed into the picture symbols and each winning outcome is celebrated with fanfarocity jingle and a light show of sorts.

How to Play Gemmed! Slot

Like in other Betsoft online slots, the game's controls and bets are in the bottom end of the screen. You can select the bets from the sliding scale, which can be moved by pressing the minus and the plus buttons.

The play button is the bigger of the two-round buttons in the bottom right corner of the screen. Pressing the big button one will send the reels spinning and deduct the selected bet for that one spin.

If you wish to let the game engage in the autospins mode, select the available options from there. You can program a number of automatic spins from the available number presets and you can add the option single win and total loss limit.

To access the paytable select the 'i' button and you can see all of the symbol pays, plus the additional information about the bonus feature.

How to Win Gemmed! Slots

This the part where the 81 paylins are shrouded in mystery as this is the only information we get before the game is officially released. We can’t speculate how the MAXPAYSTM really works but somehow we are inclined that it is somehow related to symbols matching on adjacent reels.

The game has a free spins bonus feature, as we hear from our eyes and ears at the gambling fairs where Gemmed! Slots was promoted. The free spins are triggered with three or more of the scatter symbols anywhere on the reels.

We are anticipating this game with gusto, and the game itself is being widely expected to bring something new and big in the world of online casinos. So before the Gemmed! Slot is released, do check out the Bonanza slot for a similar gem-themed reel-action.

Claim a welcome offers to one of the casinos on this page and get on your gaming adventure today.