SoftSwiss - BGaming are the company behind a new take on the legend of Excalibur. Avalon the Lost Kingdom slot takes us in front of the stone from which lucky players can try to pull the sword out for a chance to win up to 5000x on the winning bet and three extra features that include multipliers, random wilds and free spins. 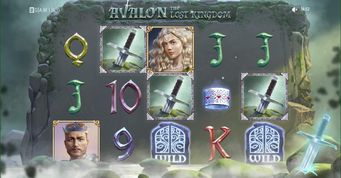 The game at hand takes place on a reel-set of three rows and five reels which spin across 20 paylines. Besides the nice graphics design and the dynamic gameplay Avalon the Lost Kingdom offers a number of features that can spice up your gaming adventure.

Besides a standard wild symbol there the option to choose something called the Fateful Wild which comes into play during the free spins bonus. There is also a random feature that appears in the free spins bonus and multipliers that can boost your wins between 2x and 7x.

BGaming have deployed their best designers to the task and the result is nothing short of a marvellous online slot.

The theme includes a cast of characters from the Stone in the Sword legend. The picture symbols include two princesses and King Arthur, the sword in the stone symbol, the golden chalice and a silver bracelet.

Each of the picture symbols in Avalon The Lost Kingdom slots spring to life when they become part of a winning outcome. The winning lines are highlighted by magical light and the amounts of the win are displayed in the center of the screen.

Overall, it is a great online slots both in terms of graphics and the payout potential.

How to Play Avalon The Lost Kingdom Slot

You adventure to Avalon can begin with the push of the spin button, which can be found in the bottom right corner of the screen. This action sends the reels to turn one time and deduct the active bet from the balance once.

To select your wager you need to press the minus or plus buttons in the bottom left area of the screen. The smallest bet that the game is offering is 20p, which is one penny per each of the 20 always-active paylines. The maximum bet takes £50.00 per spin, or £2.00 per line.

Avalon The Lost Kingdom slot displays the latest wins in the window at the bottom center area and the concurrent balance is shown in the bottom left corner.

Those who want to let the game play in its autoplay mode can do so by pressing that button. The menu that opens up offers a number of automatic spins presets and an advanced menu with additional options to place stops on the autoplay mode.

How to Win Avalon The Lost Kingdom Slot

To register a win in the game you need to get three matching symbols that start from the leftmost reel and continue uninterrupted. Wins are also made with four and five symbols of the same kind.

In terms of value, the most lucrative are the portraits of the legend's characters: King Arthur's symbol pays 800x, that of the brow-haired princess pays 600x and the blonde princess pays 600x also. All of these outcomes are for five matching symbols.

The wild is represented by a symbol of the tree of life and it simply says Wild on it. Five of these symbols falling on a payline pay 800x multiplied by the payline bet.

The remaining symbols in Avalon The Lost Kingdom slot pay varying amounts, between 500x for the chalice and bracelet to 75x, 100x and 150x for five of the respective cards symbols.

There is a free spins bonus that comes with a set of additional features. The bonus is triggered by the scatter symbol, which is the sword in the stone.

Three, four and five of these symbols bring 10, 12 and 15 free spins respectively. Since these are scattered, they can appear anywhere on the reels to trigger the bonus.

Before it begins, the feature game lets the players choose between the three characters. The selected symbol will transform into a wild, so each time it shows it acts as an additional wild to the one that is standard.

This feature may appear during the free spins. When it does, it has the tendency to appear again or multiple times. If it doesn't appear one, it won't appear at all until the end of the bonus.

When it does appear, an extra number of wilds are placed on the reels of each spin.

This is a bonus feature that appears in the free spins bonus to add multipliers between 2x and 7x on the winning bet. The multipliers can change in value with each spin at random.

The game has been made available as a free play demo slot. This enables those players who are interested in it to try it with free credits at online casinos that host demo slots.

The developing studio may not be widely known, but they sure have made a terrific online slot. 5000x is the max payout and there are three features in the game that complete a fine gaming experience.

Discover the Avalon The Lost Kingdom slots by claiming a welcome offer right from this page and play at top rated online casinos.

Avalon II Quest For The Grails

The Story of Alexander II