Experience a Tahiti Gold rush on a megaways slot game that has as little as 4096 and goes up to 262144 ways to pay. This is a game of six reels whose rows can expand up to eight. There are wild symbols and Tiki Eyes which zap non-winning symbols, as well as a free spins bonys. Play for a chance to reach a 5000x multiplier on the bet, which translates to some extraordinary sums. Play on! 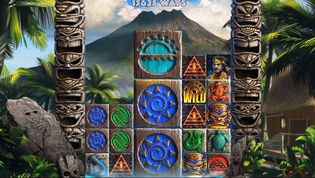 Play for a chance to win the 5000x multiplier on the Tahiti Gold slot, on a megaways avalanche style of play.

ELK Gaming have some amazing releases under their belt and in the slew of megaways slots, it was just logical that they will use the mechanism innovated by Big Time Gaming that now everybody seems to use, and enjoy too. So we know that Tahiti Gold slot is a megaways engine that takes the idea from a previously famous slot game from the same company - Ecuador Gold - and gives it a new vibe, this time in Tahiti.

The game can turn up anywhere between 4096 and 262-144 ways to win. This megaway action has six reels and symbols that can shift the number of rows from four to eight and either number in-between. We have seen this type of twist on a megaways game before, but this time around it is done in a gameplay style that is fun and entertaining. As for the potential winnings, these are made out as a multiplier on the whole bet sum, with the most valuable symbol paying 3.5x the bet with the avalanche style fall of the symbols.

Let's discover some further insight into the game and see why Tahiti Gold slot and Ecuador Gold slot are two games that will give Bonanza a run for its money.

How to Play Tahiti Gold Slot

Setting up the game requires finding out the size of the bet in relation to the balance - something which will provide enough turns on the reels and leave possibility for enough wins to occur so that the balance is kept up for the possibility of a big win - if this is something on the player's mind.

That being said, the bet per spin amount can be selected from the bottom left corner of the screen, from the stacks of coins icon. The smallest bet is £0.20 and these go up to £1.00 in increments of 0.20. From there on, there are small and medium bets until the cap of £100.00 per spin.

When ready to make the symbols drop in an avalanche, hit the spin button which is in the bottom right corner. The autospin option is above the spin button and the paytable is under the menu icon. This is where the players can find out all of the symbol pays and bonus feature information.

How to Win Tahiti Gold

Winning the game requires big clusters of the game's symbols, which are various mysterious shapes and forms, including fierce tiki masks and the portrait of the game's hero, Kane, which is the most valuable symbol. Landing six or more symbols in a cluster leads to wins and the wins becoming replete thanks to the avalanche falls, could potentially lead to potentially amazing pays.

The game is able to turn up colossal symbols in few shapes and sizes. The biggest one takes up four by four squares on the grid and the smallest one two by two. The big symbols remove the remaining blocks of the non-winning turn, that have been left underneath, thus create more room for fresh symbols.

The Wild Forge symbols occur on the four consecutive reels to the right. This is a symbol that stays in place for the avalanche respin, when it interacts with the rest. Furthermore, the Eye of Tiki symbol will remove symbols from between two of these special symbols and create extra room for new ones.

The game's biggest win can occur in the free spins bonus game, with the added multipliers and in a succession of falling symbols that create the big symbol wins. The free falls bonus in the Tahiti Gold slots happens when three or more of the bonus symbol fall on the reel-set. Right then, the sky darkens and the reel-set is shrunk to the starting 3096 grid but the bonus could lead to it expanding to the 262.144 paylines.

As for the RTP, it just comes natural that with the game being so entertaining, its road to popularity couldn't be marred by a low return to player for the theoretical outcome. The RTP of 96.10% is just above the industry average, and the variance of the game seems to be medium to high.

This isn't a sequel to Ecuador Gold but a game of its own. ELK Gaming could have made a sequel, but they opted for a spankin' new design and slightly altered style of play, with the megaways and the avalanche wins. Land a 5000x top score times the bet, which results in a sum of 500,000 in your currency denomination.

To play Tahiti Gold start right on this page by claiming a welcome bonus to one of the casinos.