Six extra features and six reel modifiers, plus a buy feature option are the elements that comprise a truly engaging reel adventure named after a blockbuster film. Sausage Party slot has 20 fixed paylines spinning on five reels and three rows, and maximum payout potential of 50,000x multiplied by the winning bet. The slot review ahead will guide you through details that can come in useful to know before claiming the promotion on the right. 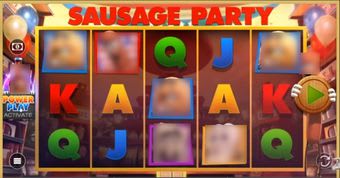 There isn't a single slots player out there who doesn't remember Ted in its online slot guise, as one of the most widely played slots in a number of years. However, Sausage Party slot is making that list too.

Few other proprietary slots managed to elbow themselves to the front, such as the Vikings slot, Sharknado, Microgaming and Foxium's 3 Tiny Gods slot. and definitely those that are based on superhero movies.

Although Ted is undisputed, there is another online slot by Blueprint Gaming that can impress with its potential wins and the multitude of bonus features: Sausage Party slot.

Directed and written by Seth Rogen and starring (by voice) a number of funny people, including Johan Hill, the movie is about a sausage, a hotdog bun, a doughnut and a litany of characters that can be found on supermarket shelves and refrigerators.

The Sausage Party slot, made by Blueprint Gaming, features the main characters whose home is a place called Shopwell's. The supermarket provides the background to a reel-set which consists of three rows and five reels. Players can get into this reel adventure by betting anywhere between £0.10 to £500.00 per spin.

Those who are eager to shop at Shopwell’s will encounter everything there is about these odd places that have a life of their own. The movie has become a cult classic among younger audiences and those who have a good sense of humor. Nevertheless, non-fans can enjoy the game all the same, despite not being familiar with the buns, wurst, Gritz and so on.

The game takes us through the corridors of the said place where we get to shop for buns, wursts, expanding wilds and the high cards. In terms of the graphics design, the symbols themselves don't offer much pep, but it is the tongue in cheek humour and the extra features that bring out the best in the game.

Sausage Party slot offers dynamic gameplay where each win outcome is marked by action of lights and numbers. There are enough bonus features are each one has a short video sequence of its own.

The soundtrack carries over bits and pieces from the movie and there is an upbeat audio track that can add some cheers and fanfare during the gameplay. Although a big number of players don't care about the sound, the slots experts over on our end find it an essential element to any game.

How to Play Sausage Party Slot

This reel adventure unfolds on three rows and five reels that spin across 20 paylines that are always active. The reel-set offers all the controls in the same place you'd find them on any Blueprint Gaming slots.

Start your spins by pressing that big round spin button which can be found on the right-hand side of the reels. You can utilize the autoplay button to have the reels roll on their own for the number of times that you specify.

When you press that button, a menu opens up, where you can select from the automatic spins prests. You can also add optional stops, such as stop on a feature trigger, stop on a balance drop and so on. These options help control the balance while playing Sausage Party slot.

The bets can be selected from the left-hand side of the reels. Use the down and up arrow to choose between the minimum of ten pennies per spin and a maximum of £200.00 per spin to play the game. There is also the Power Play button which lets you gain improved payouts at a cost.

How to Win Sausage Party Slot

Payouts are made with three symbols of the same kind and these must fall on one or more of the paylines, starting on the leftmost reel.

Sausage Party slot packs a wild symbol and a free spins bonus which is triggered by the wurst that is being prepared on the roller roaster. Besides the bonus feature, there are few other extras that can spice up your reel adventure, such as reel modifiers.

Sausage Party slot has a theoretical return to player (RTP) which is quite decent at 95.95%. In terms of the payouts, we have the standard arrangement: high-paying picture symbols and low-paying royal cards.

The wild and the game logo symbols can also make wins with two matching symbols, while all others need to post three or more on the reels.

And this is where the game can excel to some heights thanks to the extra features, which are six reel modifiers and a free spins bonus.

Each of the features is explained in the game's paytable, but in essence, what they do is project wilds on the reel-set, create colossal reels, make stacks of the wild symbol, throw on mystery symbols on the reels, improve the odds for the bonus/scatter appearing and guarantee a big win.

What is more, losing spins can dish out two additional modifiers at random. Both reshuffle the symbols. The only difference is, this is done through a different video gig on the screen.

The bonus is triggered by three scatter/bonus symbols that can stop anywhere on the five reels. In the event, you are taken on a ride inside a shopping cart while above are all of the free spins modes that you can get.

All of these Sausage Party slot features are infused with a boost of their own, such as bet multipliers, multiple wilds on the reels, wild multipliers, random win amounts and few more.

Blueprint Gaming may release this game as a free play demo slot. If it does happen, players who want to try the game before playing with real money can find it at online casinos that host demo slots.

Blueprint Gaming delivered what was expected: multiple bonus features and multiple reel modifiers. What is more, they threw in two guaranteed wins on a losing spin. All this makes for a fun-loving reel adventure that can pay as much as 50,000x multiplied by the winning bet.

Discover the Sausage Party slot by claiming a welcome offer right from this page and play at top-rated online casinos.

How can I trigger free spins in the Sausage Party slot?

In the Sausage Party slot, free spins can be triggered via the Wheel of Fortune in three rounds. The first one is Gettin’ Juiced Spins, which gives you 10 free spins. The second one is Bread Bashing Spins, which also gives you 10 free spins with different symbols. And finally, the third round is Burn In The Oven Spins that gives you five free spins. All of these Sausage Party slot free spins rounds are combined with plenty of features like bet multipliers, multiple wilds on the reels, wild multipliers, random win amounts and few more.

Does the Sausage Party slot feature a progressive jackpot?

There isn't a progressive jackpot that you can win in Sausage Party slot, but the game comes with a lot of bonus features that have huge winning potential. In fact, the maximum win is 50,000x the stake which is a pretty big amount.

Do I need to download software to play Sausage Party slot?

No, the game is available to play from your web and mobile browser and it doesn't require any additional software. Also, some online casinos have their own apps that make it easier to play slot games.