Join the TV’s favourite bear, Ted, in Blueprint Gaming’s Ted Pub Fruit slots. Relive all of the memorable moments from the hit movie encapsulated in bonus format! Along with the added traditional symbols and fruity pub-style structure that is sure to attract our nostalgic slot players, there’s plenty of bonus features to uncover!

When Blueprint Gaming released Ted slots, they have received excellent reviews for their skilful adaptation of the hit comedy movie from 2012 starring Mark Wahlberg and Seth Macfarlane as a man and his walking, talking, cursing and drinking pal, as well as for their innovative features. Almost two years later, the UK based game studio has made a version of the game to fit into their successful Pub Fruits Series, giving Ted a classic upright pub fruit machine look and feel. Keep reading to find out more about Ted Pub Fruit slots!

Ted Pub Fruit slots has the same 5x3 reels as the first game, but this time we’re looking at only five active paylines.

The original Ted slot from Blueprint had a more cinematic feel, whereas this game is a bit more traditional. Most of the symbols are types of fruits and include cherries, lemons, oranges, plums, grapes and melons. There are just a couple of movie-themed symbols, including Ted himself and the angry duck, as well as the game’s logo.

In terms of design, the game is made to look exactly like the kind of fruit machine that you would encounter in a pub. The standard fruity game board sits at the bottom of the screen with the features and additional cash prizes accessible via entry to the ‘round the board’ type trail above.

How To Play Ted Pub Fruit

As we already mentioned, there are just five paylines in Ted Pub Fruit. You can wager anywhere from 10p to £10 per spin, which makes this game perfect for players with smaller budgets. Setting your bet can be done by clicking the ‘Stake’ button on the taskbar below the reels. There’s a green ‘Start’ button which spins the reels, as well as an autoplay feature which allows you to choose up to 100 automatic spins. The ‘Info’ button provides information about the payouts, bonus features and general game rules.

The goal in Ted Pub Fruit slots is to land three or more matching symbols on the same payline and receive a payout. The top paying symbol is the game’s logo, which pays out a prize worth 50x your stake. Next is Ted himself which is worth 25 times the bet for five-of-a-kind, followed by the duck and the watermelon with a 20x-payout. The remaining fruits are the lower-paying symbols, with five grapes or plums awarding 10 times your stake and a five-of-a-kind combination made of oranges, lemons or cherries will pay 5x the bet. 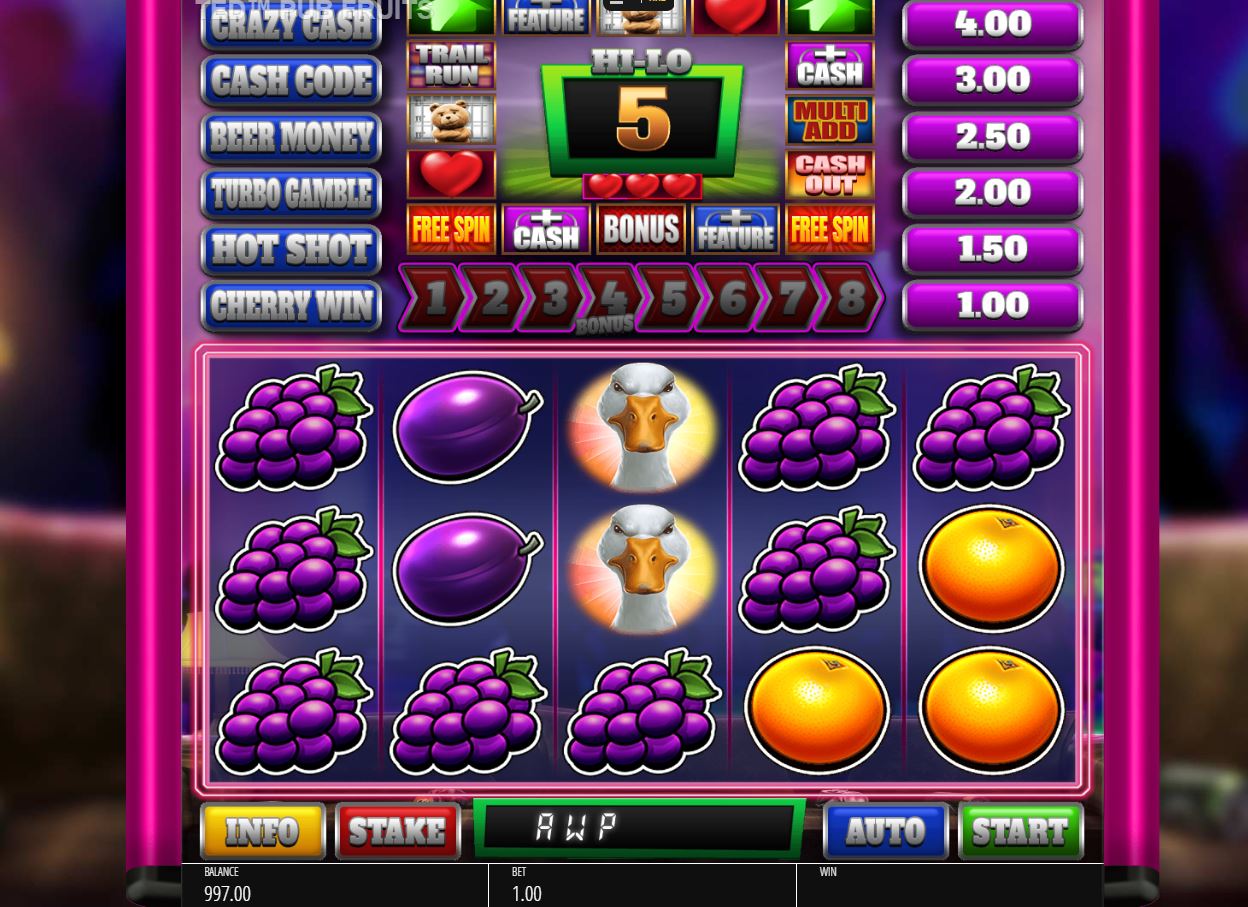 The features in this slot revolve around a Trail system on which you collect numbers that appear in symbols. If you collect four or more, you get the bonus from that Trail, while eight or more trigger the Super Board feature. During this bonus game, you can get cash prizes or progress further on the trail, with respins and win spins also possible here.

The Super Board has both bigger cash prizes and features to give you. The 16 possible features of this game are the following: 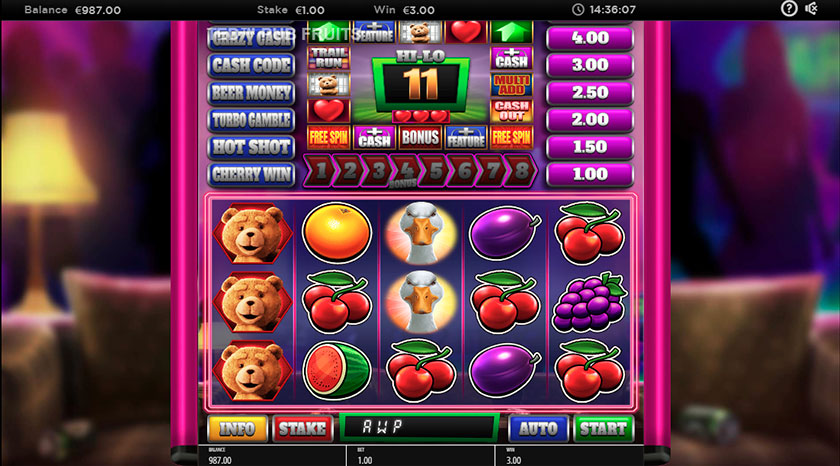 As we've already mentioned, Ted Pub Fruit slot is based on the original Ted slot, released in 2017, by the same software provider Blueprint Gaming. We won't tell you that the original Ted slot is based on the movie with Mark Wahlberg and Seth MacFarlane, as you already know that. Ted slot has three rows, five reels and 20 paylines. While spinning the reels, you'll get a chance to trigger five entertaining and potentially lucrative bonus features. Oh, and did you know that there are additional random base game features. If you want to read more about Ted slot, feel free to click on the link here.

Join the TV’s favourite bear, Ted, in Blueprint Gaming’s Ted Pub Fruit slots. Relive all of the memorable moments from the hit movie encapsulated in bonus format! Along with the added traditional symbols and fruity pub-style structure that is sure to attract our nostalgic slot players, there’s plenty of bonus features to uncover!

You can play Ted Pub Fruit Series on desktop, tablet or on mobile devices.

Collect some fruits and have fun with Ted! Give Ted Pub Fruits slots a try at one of the casinos recommended here at SlotsWise!