777 Gems Respin can pay amazing amounts. 150x for three of the same 777 symbols sounds great, but in the best outcome, the players who get a reel-set filled with the sevens actually gets 750x multiplied by the winning bet. The gems symbols warrant respins when two stacked reels appear on the reel-set, for a chance to getting a third reel, and a big win with it. 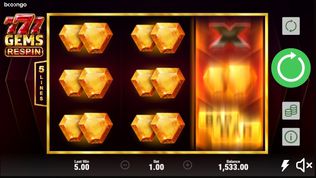 Play the 777 Gems Respin slots for a chance to win up to 750x multiplied by the triggering bet, from a single spin.

The slots experts at Booongo have created a sequel to an online slot that already has a following. Retro slots became a thing in 2019 and the trend continues in 2020, and who knows, it might go on thanks to games like 777 Gems Respin slot.

The 'retro' attribute is given by the three reels and three rows. These spin across five always-active paylines, which in turn can result in wins of three symbols of the same kind. 777 Gems Respin can also result in the entire reel-set being canvassed in the same type of symbol, and that results in bonus winnings.

The players aren't going to find a wild symbol or a scatter. There is a total of eight symbols, of which three four are gems, three are classical slots symbols and one is the X mark. The only bonus game is the one that triggers a respin, which increases the chances for a reel-set filled by the same symbol.

Like in the first edition, we have the same set of symbols and gameplay features. Booongo have done a great job grasping the essence of a contemporary slot that draws its inspiration from the retro slots in the old days.

From a graphics design standpoint, the game doesn't offer much flare. The symbols are still on the reels. When there is a winning outcome 777 Gems Respin slot will push up the winning outcome and draw a line across it.

On the other hand big wins are noted with some fanfare and coins gushing out from the bottom of the screen. Also, the respin feature causes that reel to pick up torque to a stunning effect and towards the potential full reel-set of the same symbol.

How to Play 777 Gems Respin Slot

You reel adventure can begin as soon as you hit the spin button, which is represented by a green, round button on the right side of the reel-set. Above it is the buttons for the autoplay mode and below are the info for the paytable and the coin stacks, where you can choose the bet per spin.

Select the coin stacks to pick your bet. 777 Gems Respin slot gives you a nice range that starts at £0.10 per spin and goes up to £100.00. Each spin, regardless of the bet you have chosen, will spin across the five paylines.

If you want to kick back and relax you can opt for the autoplay button. Once you press this button the reels will start spinning, deducting the active bet for each spin. When choosing this gameplay mode you have to be mindful of the balance and the bet you've selected because there isn't an option to choose the number of automatic spins.

To toggle on or off the quick-spin mode, which causes the reels to spin and stop faster than the usual, press the thunder button in the bottom right corner. The speaker symbol lets you turn on or off the sound.

How to Win 777 Gems Respin Slots

Wins in the game are made with three or more symbols of the same kind and there can be between one and five payouts resulting from the same spin.

The most valuable symbol are the red hot triple sevens. A payline filled with that symbol brings 150x on the winning bet. The bells pay 50x for three and the BAR symbol pays 10x. All of these are quite savory amounts.

The gems in 777 Gems Respin slots pay 5x for three of the same kind, while the X returns the bet with 1x on the bet.

There are two extras in the game. One is the respin feature and the other the double multiplier.

Both are tied to the same event - whenever there are two reels stacked with the same gem symbol, the remaining reel will go for a respin, for a chance to return with at least one more symbols of the same kind.

If the reel comes stacked, the reel-set will be canvassed with the matching gem, which triggers the second extra - a 2x multiplied on the total win.

A respin can occur in another instance, and it doesn't need to involve two stacked reels. Any non-winning spin can randomly cause a respin, but it wouldn't deliver the same prize because stacked gems reels would be missing.

This mobile and personal computer game made by the slots experts at Booongo is available to everyone as a free play demo. Online casinos that host demo games will have it there if they have it on the roster at all.