Experience a retro slot that's been given a twist - the Blazing 777 slot comes with ten individual paylines that spin three reels. The sevens are the most lucrative set of symbols and these get a boost during the free spins game. A win of three sevens triggers the corresponding number of spins and there, the top prize is 420x multiplied by the bet. 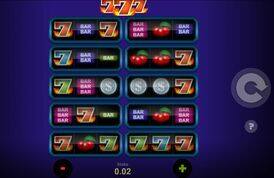 Play the Blazing 777 slot for a chance to win up to 420x multiplied by the bet, on one or more of the game’s ten paylines.

Here is a slot game that takes the single payline gig to a whole other level. The slots experts at 1x2Gaming have thrown in a surprise release that is a retro slot with a twist. The Blazing 777 slot is one in a series of releases coming from this company, all of which are full blown video and 3D slots, with a couple of odd ones out such as this game.

Blazing 777 offers ten single payline rows in a very simple layout where the entire focus is on the classical slots symbols. The payouts are made in a way that is overly familiar - get three matching symbols on the payline and win a prize. The extraordinary twist is that with a single spin you can get up to ten individual payline wins on the Blazing 777 slots.

But is there any room for a surprise feature in a retro game like this one? The answer is, sadly, nope. The players get a bare-bone action on the reels much akin that of the old slots, perhaps since the Liberty Bell was made back in 1895. But, but, there is a twist. There is a bonus feature on this slot and it may hold the key to a potential big win.

The players get ten individual lines that spin on three reels. The symbols of the game are all too familiar if you have played any retro slot game: the sevens.

That's it. The game's paytable and reels are dominated by the sevens symbol, which comes in different color layouts.

Besides the sevens there are few other symbols, such as the BAR and its combination of ones, twos and threes, a silver coin with the dollar symbol and the cherries.

How to Play Blazing 777 Slot

The starts with the push of the spin button that is located to the right of the reel-set. Unlike the overwhelming majority of slots out there, this one does not have an autospin function.

And since the game has been optimized to play on mobile and tablet, using the thumb to press play is a piece of cake, so let's say with this retro game there is no need for autospins.

To select the stake per each payline use the huge (optimized fro mobile play, right) minus and plus buttons underneath the reels. The amount of the stake is displayed between and extrapolated across all ten lines. The total stake is displayed in the very bottom left corner.

The game can deliver a total payout on a single line of 420x multiplied by the bet. With the highest wager that is 21,000 when three blazing golden sevens fall on the reels during the Blazing Sevens feature.

In the base game, the top payout is 100x and that brings on a prize of 5000 for the red sevens, 50x for the blue and 25x for the green sevens. The cherries is the least lucrative symbol, which nevertheless doubles the winnings of any bet.

To view the full paytable of the Blazing 777 slots select the question mark button that can be found underneath the spin button.

It is very simple how the bonus game is triggered. Simply land any three matching sevens. The color of this number corresponds to the number of spins you can get.

Like we said, during the bonus the sevens come with increased prizes and there are two additional color variants. While the red seven is the most lucrative base-game symbol, the bonus gets additionally black sevens and golden sevens.

The game can be discovered online and taken for a free play round in order to get a feel for its gameplay and general vibe and variance. The slots experts at 1x2Gaming have allowed a demo version to be found online. On the other hand, you can also play the game with the minimum bet which isn’t awfully high, and claim any occurring real money wins.

The game offers a reel action based on a retro look and feel but there is a bonus feature. Unlike the single reel slots this one is more engaging with ten individually spinning rows of three reels. Surely, there is a slots adventure to be had and one which can deliver some serious prizes.

Claim a welcome offer to discover the Blazing 777 slot at the online casinos on this page.