Beast Saga is the newest Booongo slot, released in November 2020. It is a Chinese-themed game, available at a number of online casinos that have been reviewed by SlotsWise. 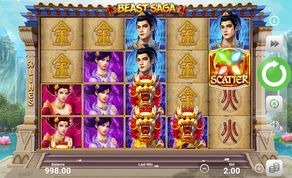 This is a Booongo slot, a provider that has developed a number of games based on Ancient civilisations and mythology.

Beast Saga is a Chinese-themed game, it has a five by four layout and 50 paylines. The game has few bonus symbols and gives you an opportunity to play for the Mega Big Wins. It has a wild and a scatter symbol and all of the symbols that appear on the reels are thematic.

This is a standard, classic, straight-forward Chinese-themed game. It will surely remind you of Chinese New Year, everything is very colourful and there are a lot of dragons. The background shows a pond with lotus leaves and the reels are shaped like a typical Chinese object with a staircase and columns.

The characters include Chinese people and the lower valued symbols are Chinese-styled symbols. The Wild is a yin-yang symbol and the scatter is also Chinese-themed.

Despite the fact that this is a game which has been already released, we have no information on its RTP and variance. Once we have more information on this, we will update this review.

Gameplay and Features on Beast Saga

This game has only one bonus feature – Free Spins. It is triggered every time at least three scatters appear on the reels.

When that happens ten free spins are triggered. There are many games which include this feature, so you surely know how it works. That’s pretty much everything we can say on the features of Beast Saga.

The gameplay is pretty straightforward, if you have played any slot before, you will have no problem with Beast Saga.

This game is available on a wide range devices, including mobile devices like smartphones and tablets, without the need of downloading a device either.

Is there a Jackpot on Beast Saga

No, there isn’t a jackpot on Beast Saga, but that doesn’t mean that you can win a significant amount of money.

These are some of the most popular Booongo slots that we’ve reviewed here on SlotsWise:

Beast Saga isn’t the most innovative slot game out there, but there is something to it. If you like Chinese slots, colour and playful atmosphere, you will probably like Beast Saga.

So, perhaps you should give it a go if you have played Asian themed games before and you liked them.