Discover the power of the sync reel feature when playing the Sync Reels slot by Booongo. The game has 243 ways to pay and a top symbol pay of £4800 when five wilds land in a row. The bonus feature is a random event during the base game where the two or more reels can sync as one and result in an increased chance for a better payout. 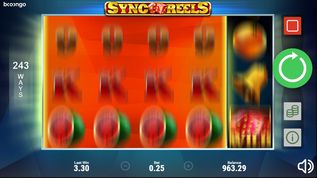 Play the Sync Reels slot for a chance to win the maximum £14,400 payout with five synced reels. Many other prizes are available to the lucky players out there.

A seemingly simple slot has a lot of reel action to offer on its five reels and three rows. Playing not on 20,not on 30, but on 243 ways to pe, this Booongo game ought to spark some interest among those who had enjoyed the classical slots games on the casino floor.

The game's title gives us a hint about the defining feature of the game. Any one of the five reels can become synced with another, and that means whatever symbols appear on the triggering reel are going to repeat on those that become synced.

The 243 ways to pay is another feature that is complementary to the sync feature, as the winning outcomes are made in the consecutive reel way. That means, a string of five matching symbols can appear on each reel and count as a win, as there isn't a specific set of paylines.

Sync Reels slot has a maximum symbol payout of 4800, which is a whole sum, and which can occur more than once during the gameplay. Besides this high pay amount that may occur during the base game, this online slot doesn't have any bonus features. Instead, the sync reels are the highlight that seems to suffice in bringing an exciting gaming experience.

How to Play Sync Reels Slot

Start the reel action on the slot game that syncs its reels with the push of the Spin button. The bet per spin can be set from the bottom panel, underneath the third reel. Use the minus and plus buttons to lower or raise the bet.

The smallest amount that can be wagered per spin is £0.25 and the biggest amount is £60.00. There are many other options between these two ends that can be selected at any time before or following a turn of the reels.

Besides these two controls there is the usual autospin button. It is located above the big green round button on the side of the reels. Press the autoplay and the reels will start to turn. There isn't an option to select from a number of presets for the automatic turns and there isn't the option to set a win or a loss limit. So when playing with the autospins button on the Sync Reels slot, simply be mindful of the balance by selecting a bet that is in tune with the balance.

Another button is there at the players’ disposal and that is the paytable. This is where you can view all of the symbol pays, the game rules and the details behind the synced reels feature which we explained. That being said, choosing a game to play may be facilitated by the information regarding the symbol pays.

How to Win Sync Reels Slots

Because this is a 243 ways to pay slot, the game can deliver winning outcomes with multiple symbols. As long as the matching symbols are three in a row on consecutive reels, and from left to, the player comes out a winner for that turn. What is more, unlike standard payline slots, the game can turn up winning outcomes with more than five symbols. So the maximum that is displayed for a symbol win is for five in a row, multiple such outcomes will simply increase the winning amount.

The most valuable symbol in the Sync Reels slot is the Wild. When playing with a bet of £5.00, the prize for five in a row is £400.00. The dynamic paytable will display all of the possible outcomes by changing of the bet amount. The second most valuable symbol is the lucky red seven. It occuring in five positions on consecutive reels pays £200.00 for a winning bet of £5.00.

The other two picture symbols are the liberty bell, the watermelon and the plum and orange, paying £100, £60 and £50, respectively.

The only feature of the game is part of the base play. This is the title-giving feature of the Sync Reels slot, which causes the reels to display the same set of symbols. This feature can occur anywhere on the reel-set, and include more than two reels, as well as the total five reels.

With this form of a dynamic gameplay and 243 ways to pay, the Sync Reels feature makes it impossible to determine the theoretical return to player, as it always shifts. There could be a from-to range but it isn’t going to be a constant value. So the best advice is to play and get a feel for this slot game.

We can’t get enough of this online slot. It is retro, it is classic and it is innovative, yet made very simple. These are all assets that many players can come to appreciate. So whether to play or not will always depend on whether you’ll continue to be impressed by the game after the first 10 or 15 spins.

Play Sync Reels and other online slots at one of the casinos on this page. Claim a welcome offer to start your adventure with free spins or bonus money.