The game takes place on three rows and five reels. These spin across 25 paylines that are always active and add to the excitement of playing a jackpot game. In addition to a thrilling base game adventure, Rainbow Luck comes with a bonus feature, medium variance and a theoretical return to player of 96.00%. 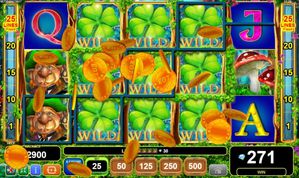 EGT are back with their original slot games that carry the four surprise jackpot prizes and the zone on the reel-set, which increases the odds for bigger wins. This time around, the theme of the game is the phenomenon known as Irish Luck, which throws into the picture pixies, leprechauns, and the chances to win a big pot of gold coins at the end of the rainbow.

Rainbow Luck slot comes with a set of features that are considered standard across most games by the same developers. Base game wins can be increased in a gamble game of guessing the right card color and there is the Boost Win Zone which can result in more free spins when the bonus triggers.

Rainbow Luck slots can get quite engaging thanks to a set of visual effects which respond to specific actions on the reels. Wins are celebrated in fanfare and are surrounded by light. Sadly, the game doesn't earn points in the sound department, as the musical theme could have been something more than what is.

How to Play Rainbow Luck Slot

The game comes with the standard arrangement of the buttons and controls, which can be found across all EGT slots. One of the unique characteristics about their games is that a spin button is missing. Instead, each of the squares underneath the reel-set can initiate one spin, with the bet amount on the box.

The BET amounts are 25, 50, 125, 250 and 500. These correspond to whatever the credit size is designated by the casino, so we shouldn't consider these amounts correspond to amounts in actual currency. Of course, the middle amount of the range of bets is not 125 pounds per spin.

At any rate, Rainbow Luck slot has all other features that are standard across slot games. There is the autoplay feature which starts the reels spinning on their own right away. The amount of the bet for each spin is the box that is lit in green.

Last but not least, Rainbow Luck has the four jackpot amounts displayed on top of the reels and the balance in the bottom left corner of the screen. The 'I' button stands for Information and loads the paytable along with all the gameplay and feature details.

How to Win Rainbow Luck Slots

Winning in the game requires three matching symbols, while the biggest payout for any kind of symbol is made with five. The game has 25 paylines that are always active and the middle of the reel-set contains the Boost Win Zone.

Rainbow Luck slot has a wild symbol that substitutes for any other symbol, except for the scatter. In terms of payouts, the most valuable symbol is the leprechaunette or pixie. Her symbol pays 500x multiplied by the payline bet for five matching symbols. The leprechaun's symbol pays 300x, the ladybug’s 250x, and so on.

There is only one bonus feature in the game and that is a free spins bonus that triggers with three scatter symbols falling on the second, third and fourth reel. This event can trigger either ten or 30 free spins if the symbols had fallen inside the Boost Win Zone.

The Zone can receive the wild and cast some magic on it too. When wilds fall inside the zone, they will replicate outside it, in order to boost the chances for winning outcomes.

Any spin in the game can trigger the Mystery Jackpot game at random. This is a pick-me bonus where the players can win the corresponding jackpot amount by reveal three matching card suits.

EGT like to open up their slots for free demo play, which enables the players to try any of them for free.

The game has medium variance and average return to player of 96.00%. The maximum win from any spin can reach as much as 250x multiplied by the winning bet and there is always that random chance that the game triggers the jackpot bonus.

Discover the Rainbow Luck slots by claiming a welcome offer right from this page and play at top-rated online casinos.