Red Tiger Gaming released an Irish themed slot involving a cheerful leprechaun whose job is to inviite reel modifiers that can boost you wins, thanks to the guaranteed wins that emerge thereof. In addition, two pick-me bonus games and a free spins bonus all coalesce for a reel adventure on up to 49 paylines and a medium to high variane. 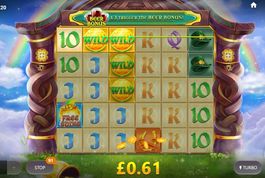 Hovering cylinder hats, magical clouds, a puffing leprechaun and potential big wins are all part of the Rainbow Jackpots Power Lines slot. Made by the slots experts at Red Tiger Gaming, the game offers a number of features and base game wins.

The reel adventure takes place on six reels and five rows that spin across a shifting number of paylines, called Power Lines, which can reach as many as 49. This is possible on a payout mechanism which isn't Megaways yet it does cause symbols to come on the reel taking up between seven and two positions.

Rainbow Jackpots Power Lines slot offers a number of bonus features, aptly named Lucky Features, which can spice up the gameplay and the potential wins. There are the so-called Super Symbols in the leprechaun's cylinder hat, the golden clover and the golden horseshoe that can stop on the reels and increase the chances for a winning outcome.

When it comes to the graphics design and the layout, it is apparent that the slots experts at Red Tiger have given their release the optimal treatment.

Rainbow Jackpots Power Lines slot is an Irish-themed slot that takes place somewhere high in the clouds, on a reel-set that is enframed within Celtic pillars adorned with golden clovers.

The gameplay is quite dynamic even though the symbols are still on the reels - unless the leprechaun appears in the picture to trigger on the reel-modifiers, which is always an animated sequence.

Big wins are announced in fanfare and, naturally, gold coins gush out from the bottom of the reels, all to a cheerful Irish melody.

Your adventure in pursuit of the proverbial end of the rainbow can start by pressing the big, yellow button in the bottom right corner of the screen. This is a familiar place where Red Tiger keep the most important button in any online slot game.

Before you press it for the spin, you should check out what the default bet amount is. This can be done in the bottom left corner, in the Stake window. If this amount is one that you wouldn't want to wager at the get-go, then you can use the plus and minus buttons to change it.

Rainbow Jackpots Power Lines slot offers a wide range of bets that start at only ten pennies per spin and ends with a max of £100.00. Press the Stake button to open up the list and scroll through it to find your bet amount.

To speed-up this reel adventure you can have the Turbo button toggled on. To make the reels spin automatically, press the autoplay button on the opposite side of the Turbo button and select the number of automatic spins from the available presets.

Win outcomes can post to anywhere between four and 49 paylines. They must involve at least three symbols, of which there are three high-paying picture symbols and five cards, between ten and ace.

The wild symbol is represented by a golden medallion. This symbol substitutes and also pays the highest prize of 15x on the winning bet for five of six of the same. Next symbol in terms of value is the golden clover, paying 8x on the winning bet.

In Rainbow Jackpots Power Lines slot, the golden horseshoe pays 6x and the cylinder hat pays 5x for six matching symbols. The remaining symbols in the cards category pay between 0.8x and 3x for the optimal number of symbols.

There are three extra features in the game, all of which are reel modifiers that can post in any spin.

The Super Free Spins is exactly that but it comes with the possibility of flying high-paying symbols to stop on the reels in order to increase the wins.

The Triple Beer Bonus can trigger up to 1000x in the event of filling up three glasses with lager.

The Symbol Swad feature is the set of three reel modifiers triggered at random, where the top paying symbols stop on the reels for guaranteed wins.

Red Tiger Gaming often release their online slots as free play demo slots. Players who want to try the game without spending real money can do so at casinos that host demo slots.

Rainbow Jackpots Power Lines slot is quite dynamic and offers up to 1000x in instant wins. The variance (volatility) is medium to high and the return to player is at 95.68% which is just around the average. The absence of a scatter/bonus symbol is balanced with the possibility of landing three different bonuses, of which three are reel modifiers.

Discover the Rainbow Jackpots Power Lines slot by claiming a welcome offer right from this page and play at top-rated online casinos.

What are Power Lines?

Power Lines is the number of paylines that the slot offers. This changes with each spin depending on how many symbols are on each reel. In Rainbow Jackpots Power Lines slot, you can have four to 49 paylines live on any spin.

Yes, the game comes with free spins that can be activated in a usual way, by landing three or more scatter symbols. In addition, the game has the Super Free Spins feature where the lucky leprechaun triggers free spins in a random number.

Can I play Rainbow Jackpots Power Lines slot on mobile?

Yes, the game is mobile-optimised and you can access it from your mobile browser. It works on any operating system, both on mobile and tablet devices.