Nitropolis is a mint new slot by ELK Studios. The game has made a remarkable entry with its edgy gameplay and huge payout potential. Upon first looks, it appears that the robust 4x6 layout has more rows than you can count. This impression lingers on as you are playing the game because the playing field can invite stacked symbols that are part of the Nitro Reels mechanic. This new trademark system by ELK Studios can stretch the number of ways to win to unimaginable heights. If anyone is asking for a number, there is "little" more than 85 million ways to win! and we are not giving out the maximum win figure just yet. The theoretical return to player (RTP) of Nitropolis is a solid 96.10%. The official release date of the game is November 3rd, so players, get ready. 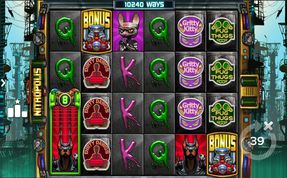 ELK Studios has resolved to change the future of slots by creating one of the most stunning new online slots in 2020 - Nitropolis. The name hints at something edgy and explosive and that's exactly how this game looks and feels.

Our slots experts were made to feel welcome in a futuristic metropolis that is the stuff of Blade Runner meets Technopunk meets a gigantic oil rig. All of it is stylistically sustained, but that's only one part of the Nitropolis slot.

The rest is a raw reel adventure, filled with excitement by the brand-new payout system called Nitro Reels, which is a trademark mechanism by ELK Studios.

One of the more astounding details about Nitropolis is the payout potential. Although the game is not promoted as a jackpot slot, its maximum payout is up to £1,000,000 or your currency equivalent which is nothing short of awesome.

When we first heard about the game some glances were exchanged because of the name. It is apparent that Nitropolis is a portmanteau of the words Metropolis and Nitro, which summarizes the character of the game.

ELK Studios has created a world in which pet animals are running what appears to be a ginormous nitromethane rig. It looks like the Doberman, the pug, the rat and the Siamese cat mastermind are producing nitrous oxide too, also known as laughing gas.

It's small wonder then that Nitropolis slots behaves like a crazed engine that's ready to zip from zero to 200mph in a blink of an eye. The graphics suit the style of the game completely, as there are a lot of moving parts that can keep excitable players like our slots experts, on the edge of their seat.

Another notable moment of the game is the soundtrack which is a full-blown, erm, what is it now... dubstep beat drenched in a heavy metal sound and wrapped in an edgy pop-rock vibe.

Altogether, the game is very fun to play and that's one more element to add to its payout potential and mathematical model.

How to Play Nitropolis Slot

When it comes to playing the game, players will find the familiar ELK Studios button layout. The Spin button is the big curved arrow in the bottom-right corner of the screen. Above it is the button for autoplay and on the left side of the reels are the buttons for the Bet, the Menu and the optional Buy Feature.

As you play Nitropolis slot you notice right away that this is one excellent example of feature automatic. There are lots of events that are happening in the base game that simply flow together as part of the gameplay. The positions for the symbols that are part of a winning combination are sent for a respin while the rest of the positions stay as-is for a chance to link-up with the new set of symbols.

Also, the Nitro Reels feature takes place in unison with the rest of the events that are taking place on the reels. When a symbol is selected for a Nitro Reel, the symbols stack high up and their number is shown at the top of the contraption, which occupies two positions and which can post on more than one reel during the same spin or respin.

Those who aren’t familiar with productions by ELK Studio are welcome to consider choosing one of the Betting Strategies of which there are four: Optimizer, Leveller, Booster and Jumper which can make an automated selection of bets according to the specified logic for each of the options. This selection can be made from the coin stacks button where players can choose their bet amount.

How to Win Nitropolis Slots

The starting position counts 4096 ways to win and the biggest possible number counts an unprecedented 85, 155,840 ways to win. This is of course a theoretical maximum, but getting even halfway there, or even one quarter up to that number must be a real thrill.

Optimal payouts are made for six of a kind, but the final tally for the prize is counted following all of the potential boosters, such as the stacked symbols.

In terms of payouts, we have the usual high and low symbols but there is a middle section too, comprised of the emblems that correspond to each symbol in the pet category.

The royal cards can pay between 0.1x and 0.5x your bet; the emblems can pay between 0.3x and 1.6x which already shows the decent potential of Nitropolis slot. And last but not least, the rat, the pug, the cat and the pooch can ring-up prizes between 0.8x and 5x times your bet.

We named and explained the Respins feature and the Nitro Reels and now it is time for the Free Spins bonus. Between three and six scatter symbols can trigger up to 25 free spins.

This is an event where the players can probably meet the best chances for landing one or few big wins because the Nitro Reels that occur on the playing field become locked in their position and remain so for the duration of the free rounds.

Another boon is the Scatter Pay feature. The game chooses a special symbol at random to become 'scattered' which means winning outcomes can be made regardless of the symbol's position.

We realize excitement runs high about Nitropolis and it’s all understood. Players can try the game as a free play demo slot at online casinos that host slots by ELK Studios in “practice play” mode. This enables you to play with free credits and try out the game’s rhythm, the features and the overall look and feel so that you can decide if it’s a game you’d play as real money slot.

The game comes with a maximum payout potential of one million pounds, euro or dollars. That’s an astounding sum, but getting even a bite off of that probably feels amazing. Needless to say, we loved the game for all that it can offer, including the thought in the back of your mind that the fun and games may possibly lead to a big win.

Start your Nitropolis slots adventure right from this page, when you claim one of the welcome bonuses.