The title at hand is a jackpot slot with three tier prizes with a range of bets that begins with 0.25 per spin. Symbol payouts are decent, especially when a wild or two helps a payline event of three matching symbols to make for four or five. A free spins bonus is there, triggered by three scatters where all wins get a x3 on the total, as well as colossal symbols. 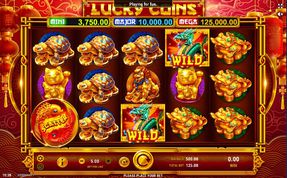 Play a three-tier jackpot game called Lucky Coins slot for a chance to win up to 10,000.

An online slot with a set of auspicious symbols, lots of gold and a number of features that all combine for an exciting jackpot-heavy gameplay. Lucky Coins slot offers a bonus game with colossal symbols and a coins bonus. A number of extras can turn up on the screen which could lead to iterations of free spins with potentially incredible results.

The gameplay takes place on a reel-set of three rows and five reels. These spin across 25 always active paylines that involve symbols found to relate to luck, fortune and prosperity. Lucky Coins has everything to do with the coins that can come to rain down during the bonus game, which is one of those bonuses with respins and cash prizes attached to the coin symbols that we are used to seeing.

Wins are made with a minimum of three symbols that start on the leftmost reel. There can be more than one winning outcome which can result from a single spin. The range of bets is wide enough and starts at a standard of one penny per payline which amounts to £0.25 per spin, not bad for a jackpot slot.

This being an Ancient China setting it will take few squints to get your sight accustomed to the golden layout which dominates every single symbol, the reel's frames and even the background.

Otherwise Lucky Coins slots is a well-made online slot that can bring both exciting wins and an engaging visual display.

Each winning outcome is marked by, have you guessed? - golden light around those symbols. A musical theme does well to entertain and grasp the luck and fortune theme of the game set in China of old.

How to Play Lucky Coins Slot

Start the game by first selecting the bet. From there on the reels will turn with the push of the spin button, located underneath the third reel. The bets can be configured from the Bet Per Line window in the bottom left corner of the screen.

By working the minus and plus buttons players can choose the amount of money that will be bet per each of the game's 25 paylines. The smallest amount is one penny and the biggest is £5.00 per line, which amounts to £125.00 per spin.

Lucky Coins slot has an autoplay button which can be found to the left of the Spin button. Press it to select the number of automatic spins, configure the active bet and add the optional Loss Limit and Single Win limit, which helps mind the balance.

In the bottom left corner of the screen keeps the 'i' button which opens up the paytable where players can view the payouts and bonus feature information.

How to Win Lucky Coins Slots

The game doesn't only come with three jackpots but it also offers a paytable with decent payouts in the base game and bonus features, with the caveat of winning four or five symbol wins, with or without the help of the wild symbol.

Comparably, wins consisting of three matching symbols pay amounts that are notable smaller, so winning in the Lucky Coins slot requires luck to invite those four and five symbol wins.

The low-paying category consists of the cards suits whose shapes are embossed by gems of different colors. These pay between 1x and 2x for five of a kind wins.

A dragon represents the wild symbol which substitutes for all other except the scatter and the lucky coins. The scatter symbol is two koi fish shaped like the yin-yang symbol. Three of these trigger six free spins and the wins are multiplied by 3x. The scatter can fall on reels one, three and five only.

The free spins bonus can bring on colossal symbols. If the dragon wild appears as such a symbol taking up the middle three reels, three additional free spins are triggered, and also the rest of the symbols can interact with the wild.

If the scatter strikes as a colossal symbol the game says "there is no limit to the number of retriggers!"

The game turns up those three coins tied with a ribbon symbols. Each carries a cash prize amount that is relative to the bet. When six of these, or more, stop on the reels the Lucky Coins Respins bonus is triggered. All other symbols are removed and the six original symbols stay in place, while the rest need to show up in the blank spots. Each additional one that finds its place will add three respins. Those coins that carry the Mini, Mega or Major signs will trigger the corresponding jackpot.

Game Art has made the game available as a free play demo. Demo slots are available at online casinos that host practice mode slots.

A three-tier jackpot slot which comes with what is now a standard bonus in many slots of the same kind - the bonus respins. The colossal symbols are an extra feature that can trigger big wins during the free spins bonus. On the other hand, the base game payouts are worth counting with five matching symbols win, while everything else pales in comparison.