Four reel modifiers and four free different spins modes are all based on the iteration of wild symbols in different arrangements. This is the defining feature that makes the Battle for Cosmos slots a fun to play slot, and one with a dynamic gameplay. The players would be in for a chance to win up to 6000x on a high variance slot. 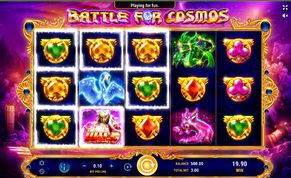 An epic battle between cosmic knights is taking place in a civilization built in the clouds. This sky-high adventure can lead to prizes of up to 6000x on the winning bet and there is a lot of to be had along that possibility.

Battle for Cosmos slot is filled with extra features. The game offers a supercharged wild symbol, four reel modifiers in the base game and four different free spins features. All takes place on a reel-set of three rows and five reels which spin across 30 always active paylines.

Battle for Cosmos comes from the production studio of Game Art, who have made a manga-esque game on the surface, which is all about the reel-modifiers at its core. With so many of these, the gameplay doesn't get any more fun-loving. The free spins bonus is another dimension where the players can see the magic of the cosmos take place.

In terms of the graphic design the designers have utilized a black background for the symbols and glowing, radiant colors to draw them. This puts a number of creatures drawn according to their imagined constellations: swan, dragon, horse and some kind of a horned wolf.

The above are the high-paying symbols of the Battle for Cosmos slots, while the remaining are the card suits done in precious stones and encased in gold. As for the setting, this lost civilization is portrayed as floating islands with temples and waterfalls, which is part of the background.

An epic musical theme involves strings and wind instruments that have been put ot a dramatic effect, which fits very well the gameplay that has a similar quality.

How to Play Battle for Cosmos Slot

Start the by first selecting a bet. Once you have selected a bet you may press the Spin button, which can be found in the bottom of the reel-set, just underneath the third reel. On both sides of this button are the remaining game controls and buttons.

To change the bet you need to locate the Bet Per Line setting which is in the left area. Use the minus and plus buttons to scroll through the amounts, which are values for the payline bet. The game has 30 paylines, so whatever is selected there will reflect on the Total Bet amount.

The smallest bet per line value on Battle for Cosmos slot is one penny and the biggest amount is £5.00. These reflect a smallest bet of £0.30 per spin and a maximum bet of £150.00. There are multiple amounts between these two, so selecting either is easy through that setting.

Those players who want to play Battle for Cosmos hands-free are welcome to utilize he autoplay setting. This is the blue button with the play symbol, that can be found to the left of the big round yellow Spin.

Press the blue button to select from the number presets for the automatic spins, which range between 10 and 500. You can add the size of the total bet and the optional settings for a loss limit amount and/or a single win limit amount.

How to Win Battle for Cosmos Slots

The winning outcomes are made with three or more symbols of the same kind, which must start on the leftmost reel and extend on towards the right. There can be more than a single win on the game's 30 fixed paylines, resulting from a single spin.

Of the high-paying symbols on the Battle for Cosmos slot paytable the most valuable is the red horse. This symbol pays 16.66x on the winning bet that triggers five of the same. The green dragon pays 8.33x for five of the same, the purple demon-wolf pays 6.66x and the swan pays a little bit more than 4x.

The most valuable symbol in terms of value is the scatter, which pays 20x on the win.

Besides the standard paying symbols the game has four of the so called Wild Knights symbols which are reel-modifiers. Each one landing on the reels will convert into a number of wilds, between three and five, and cast a specific arrangement according to the character.

The players can play and test the game at hand for free at online casinos that host free play demo slots for registered players.

There are four reel modifiers and four types of free spins modes that are marked by the type of wild symbol arrangement is going to occur on any one of the given spins. This is where the players can reach a good share of that maximum exposure of 6000x on the triggering bet.

Discover the Battle for Cosmos slots by claiming a welcome offer right from this page and play at top notch online casinos.

Age of the Gods: Ruler of the Skies