A vampire-hunting adventure is taking place on five reels and five paylines. It offers high-symbol payouts and three multipliers with the top of x5. The game's return to player probability outcome is very close to 96.00% and there is a low to medium variance. The absence of a free spins bonus is supplemented with an expanding wild that interacts with all symbols. 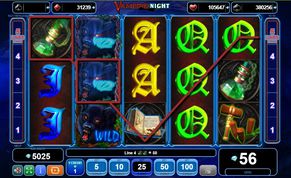 Don on your cape and look in the night for five vampires on a payline to score the ultimate prize on the Vampire Night slots.

Vampire themed everything has been all the rage since Bram Stoker wrote the novel Dracula, who rekindled interest in the famed Vlad - The Impaler - Draculia.

The Vampire Night slot is one of the online slots that takes us to the realm of beautifully-dressed people who have a thing about necks. On the opposite side of the divide are the slots players who have a thing for all of the above, plus the thrill of slots gaming and the potential wins.

Vampire Night comes from the EGT production studio and offers a five-payline adventure on three rows and five reels. A rather sizeable maximum win potential of 60,000 makes it a coveted game and so do its two most valuable symbols, prized at 600x and 240x multiplied by the winning bet.

The game has a multiplier feature and isn't shy about covering most of or the entire reel-set with the same symbol. And last but not least, perhaps the game's highlight, a four tier mystery jackpot whose four counters can be followed just above the reel-set.

Design-wise this is a well-made game. The symbols have been given a 3D rendering which brings out the best of their look and feel, especially when the picture symbols come to life by being part of a winning outcome.

Most punters will agree that a successful online slot has to have a captivating design and that sometimes less is more. Vampire Night slot is the case of such a slot game because the design isn't going to wow anyone but will nevertheless provide a fun-loving adventure.

One area where the game lacks completely is in the sound department. Besides the generic sound of the reels spinning a musical theme is absent, so in the end of ends, if the outcomes on the reel-set don't offer much then the gaming experience certainly will nudge you on to something more immersive.

How to Play Vampire Night Slot

One thing that will make you shrug your shoulders is why isn't there a Spin button. And indeed there isn't one but there are five of them, each representing the different bet amounts that are available.

Indeed, figuring out the bet hasn't been done in the most straightforward of manners. Each spin plays across five paylines which are always active. The value that's encased in the bet buttons represent the number of times the credit is extrapolated across the paylines.

The smallest bet is 5 times one credit and the biggest bet is 100 times one credit by five lines. Everything is clarified by the balance in your account as you can see the actual amount that is deducted for each spin the relevant currency.

We said there isn't a Spin or Play button in Vampire Night slots but there is a single Autoplay button. Immediately to the left of the the Credit button you can choose this option which sends the reels spinning with the latest bet amount you had played.

How to Win Vampire Night Slots

The wins are made with three symbols of the same kind, or more, falling on one of the paylines. There can be more that one payline win resulting from a single spin.

The most valuable symbol in Vampire Night slot is the he-vampire. Five of these symbols on a payline and the prizes are rather amazing - 60,000 when won with the biggest bet of 100 which reflects £100.00.

The she-vampire pays 24,000 when five of the same fall on a payline triggered by the biggest bet. Other high-paying symbols are the open book with 10,000, the vial with 4000 and the chalice and pikes and hammer. All of these amounts are multiplier by the payline bet.

There is only one extra symbol in the game and it is the Wild, which appears on all reels but the first. This symbols substitutes for all symbols on the same reel, so it works differently than the typical wild.

With the absence of a free spins bonus, the slots experts at EGT have provided something equal or better: multipliers. If the three reels on the reel-set are covered by a matching symbol, the multiplier is x3 on the win. If four reels are matched with the same symbol the pay is x4 and if the full reel-set covered then the multiplier is x5.

The game is available as a free play demo at online casinos that host demo games. This lets the players get a sense of the game, its payouts and other details.

With four mystery jackpots and symbol wins that can pay rather huge amounts, is there something we are missing about the game that balances this out on the other end? Well that may as well be the low to medium variance, which means big hits ought to occur on rare occasions which smaller wins will be more frequent.

Claim a welcome offer and discover Vampire Night slots at the online casinos on this page.