A megaways reel adventure unfolds on 117,649 ways to win, six reels and shifting rows between two and seven symbols. The game comes with a free spins bonus, multipliers on consecutive wins in that bonus and a mystery symbol that appears both in the bonus and base game. The Majestic Megaways RTP is 96.11% 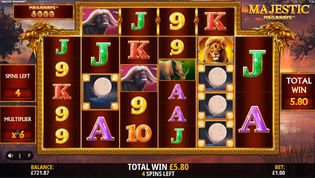 An adventure through the African savanna brings out the best potential of the Megaways engine. The game offers the familiar layout of six reels and rows that shift between two and seven symbols. Besides this there is the additional top row of four reels, which puts up symbols that can combine with the win outcomes below. Seen from another angle, Majestic Megaways is a megaways cousin of NetEnt's Serengeti Kings slot.

Most players will find the Majestic Megaways slot to be a fun-loving adventure with its maximum 117,649 ways to win that can poset wins of three or more symbols and a free spins bonus feature with multipliers on the consecutive wins. In plain words, big wins are more than possible on account of the medium to high volatility, which means long waits ought to get interrupted by small and medium wins.

Majestic Megaways takes the players on a safari adventure consisting of a number of wild animals and the high card symbols. The game has a maximum payout potential of 20,000x, which is in the optimal scenario of many consecutive wins and multipliers on the free spins bonus, which would require a number of retriggering events.

Nevertheless, a high exposure leaves room for big wins of amounts leading up to the number above.

The slot design experts at iSoftBet are bringing out a standard scheme for a megaways slot.

A still background of a beautiful image of the savanna provides the setting for the golden reel-set, guarded by two lions on the corners.

Needless to say, the reel action on Majestic Megaways slots is dynamic thanks to the cascading wins that make possible more than a single win resulting from the same spin.

The layout offers all of the gameplay information in areas that are easy to follow. The total win amount is displayed on the right, while on the left-hand side of the reel-set are the multiplier amounts in the free spins bonus, and the number of active megaways is in the top left.

Throughout the gameplay is a lively Africa-themed tune which includes a didgeridoo, which magically works in the picture.

How to Play Majestic Megaways Slot

Your adventure on the reels can begin with the push of the Spin button which can be found to the right of the reels. Above this button are those for autoplay and bets.

Before you start spinning on the Majestic Megaways slot it's best to check out the default bet, a sum that is displayed in the bottom right corner of the screen. To change this amount you need to press on the poker chip button.

The range of bets is wide but doesn't go over the top, which is an acceptable sum for high stakes players with bulging balances. The smallest bet per spin is £0.20 and the maximum is £20.00.

To have the game play in autoplay mode, select the button above Play and then choose the number of automatic spins. Optional settings are stops on a maximum balance decrease and on a maximum win, as well as stop on the bonus feature trigger.

How to Win Majestic Megaways Slots

Payouts are made with three or more matching symbols that must start on the leftmost reel and extend uninterrupted on consecutive reels. Because the Megaways payout mechanism turns up cascading wins, the symbol payouts are smaller than regular slots.

The most valuable symbol is the lion with 50x multiplied by the winning bet, when six of the same stop across the reels. The rest of the symbols pay amounts that are significantly smaller, so we are left for the multipliers to do their magic during the free spinus, as well as the cascading wins in the base game.

Majestic Megaways slot has a Buy Feature option, which lets the players get a free spins bonus instantly, however, at a cost that is many times over the active bet.

One of the extra features is the full moon symbol, which is Mystery and can substitute multiple symbols in one swoop. This symbol is present both in the base game and in the bonus spins feature.

Speaking of the feature, it is the diamond symbol that triggers 12 free spins when landing on four or more positions anywhere on the reels. Additional symbols add five spins but these can't exceed 27 per a single triggering of the bonus feature.

The unlimited multipliers occur with each consecutive win. Each winning outcome adds x1. The multipliers are factored-in on the respective winning spin and the amount thereof.

iSoftBet are likely to release this, among their other online slots, as a free play demo so that the players can test it and get a feel for the megaways adventure that can be had at your favorite online casino.

A maximum win potential of 18,000x on the winning bet is quite a lot more compared to most megaways slots that cap their wins at 10,000x. Although this is a theoretical outcome, there big wins are possible, relative to the winning bet, where the free spins bonus meets the multipliers from the cascading wins.

Discover the Majestic Megaways slots by claiming a welcome offer right from this page and play at top notch online casinos.