Merlin's Magic Mirror is an online slot by iSoftBet that can be played with a minumum of 20p, it features five reels, three rows and 20 paylines that are always active. The free spins bonus, which is triggered by three scatters, activates the magic mirrors, which can create cash prizes or matching symbols. The Magic Wild feature can create random wilds, and the respin feature is also a chance for a bigger win. The maximum cash prize is 10,000x. 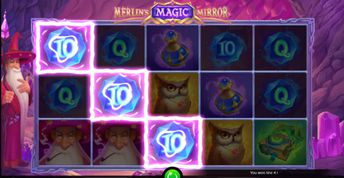 Merlin’s Magic Mirror is another online slot featuring Merlin the magician as the main character, and it can be played at a range of online casinos, including our featured partners. The maximum amount that you can win in this game is 10,000 times your line wager.

Merlin is the host of several adventures in the online slots world, and each one is more magical and mystical than the other. The game is a continuation of the famous production coming from iSoftBet. Even though there are several games featuring Merlin, all of them look and feel quite different. Speaking of this particular instance, Merlin's Magic Mirror slot, we have a reel-set arrangement with three rows and five reels with a total of 20 active paylines. All paylines are active during every spin, there’s no option to alter the number of paylines.

Magic Mirror takes place in a cave of purple and pink crystals, and a grid where the magic items appear. You will see a green grimoire, a magical potion and of course, the owl who is Merlin’s best friend and assistant. These are the high paying symbols in the game, but you’ll also see standard card symbol drawn in a way that reflects the game theme. However, the real magic occurs with the mirrors, and with the free spins, which are the special features of Merlin's Magic Mirror slots.

To start your adventure in Merlin's land first configure your bet per spin and then go on to Spin the reels or set the game in autospins mode. We’ll talk a bit more on that in the section on how to play Merlin’s Magic Mirror slot.

This game is based on the story of Merlin the Magician, a character in the King Arthur and his knights of the Round Table story. Merlin gained particular notoriety in the 1963 Disney film The Sword in the Stone. Stories involving magic and wizardry have always been considered a good theme for online slots. Even if we have a look at just the games that feature the word ‘Merlin’ in the title, we’ll still have a list of at least several slots.

These are some of the most popular online slots featuring Merlin, the adviser and magician of King Arthur.

Merlin’s Money Burst slot is a NextGen slot, featuring five reels and a non-standard set with some reels featuring two symbols whereas other reels come with three symbols each. There are 60 paylines and the RTP is quite high, set at 96.75%.

Rise of Merlin slot is a title by Play N’ Go, with a standard reels set – five reels and three rows. Graphically, this isn’t the most advanced slot, but it is a pretty exciting game with a maximum prize set at 5,000 times your line wager.

Merlin’s Magic Respin slot This is yet another NextGen slot and it appears that this provider is quite fond of the Merlin theme. This Merlin-themed slot has a five-reel, four-row layout and 50 paylines. It can be played with a minimum of 50p per spin which amounts to a single penny per payline.

Mighty Arthur slot is not a game that features the word ‘Merlin’ in the title, but Merlin is a character that you can see on the reels. Merlin is the wild symbol, so basically one of the most valuable symbols in the game.

The bet is selected from the coin-stack icon, which is located in the bottom, at the centre-right area. Selecting the button will open up a list of bets that are specified by a Coin Value, which represents the amount that is wagered per each of the active paylines.

The smallest bet is only 1p per line and that equals 20p when playing across all 20 paylines. With the game's highest bet at £20 per spin, Merlin's Magic Mirror slot is a low-stake game. Players who are willing to wager more than £20 per game will probably opt in for some other game, but if you’re not looking to play with high stakes, then you might like Merlin’s Magic Mirror.

There are two other buttons that can be used to activate gameplay features in Merlin’s Magic Mirror. One is the autospin button, located to the right of the big round green Spin button. Selecting this button will open a menu with a range of options for the autoplay, up to a total of 1,000. The autoplay allows you not only to set the number of spins and the options to set a win or a loss limit. Push or click the button Activate to set the reels going, towards the hopeful and potential big win. To stop the autoplay feature simply press the same button again.

Last but not least of the game's buttons is the paytable. It can be accessed via the ‘i’ button. This is where the players can find all of the symbol wins, as well as information about Merlin's Magic Mirror features.

The game has a number of symbols that carry valuable returns. We are going to compare all symbols based on the payouts for five matching symbols on a line. The game's most valuable symbol is Merlin. This symbol pays 500x multiplied by the triggering line bet. This symbol is followed by the owl, which brings 250x and by the green book of magic, which pays 200x, and finally there’s vial which pays 160 times the line bet.

The rest of the symbols are the high cards, which start with 10 and end with the Ace. For five matching symbols on a payline, the top payouts begin with 40x and end with 120x. These winnings are also multiplied by the line wager, and these are rather high amounts for symbols of lower value.

And the rest of the symbols in Merlin's Magic Mirror are the scatter and the wild. The wild is a substitute for the other symbols, whereas the scatter triggers the bonus game.

The bonus starts when three scattered symbols appear anywhere on the reels. What follows are ten free spins which come with an added feature. Whenever there is a scatter symbol that stops on the reels, the reel-set will open up the magic mirrors which remain in their place for the duration of the free spins. With the commencement of each of the free spins each of the mirrors in view will reveal a cash prize or a matching symbol, so there is the chance for a certain win and the chance for a possible win with the matching symbols on a payline.

This game features more than one bonus game, each more exciting then the next, so below we’ll talk a bit more about the Magic Mirror Respins, the Wizard Wilds and the Mystery Magic that gets triggered randomly.

The Magic Mirror Respins occur whenever three of the same symbols stack on a full reel. In the event, there will be a random symbol that remains sticky, while the rest of the reels will respin with those part of the bonus locked in place.

The Wizard Wilds can occur at the end of any spin, where Merlin will take his pick of a random number of symbols and turn them into wilds.

And his last trick of the night is the Mystery Magic random feature, which can occur after any non-winning spin. In the event, Merlin transforms a number of symbols into a set of matching symbols, towards the possible winning outcome.

The game has been optimized to play on mobile devices updated, including both Android smartphones and tablets, as well as mobile devices that run on iOS. The game adjusts to your screen size as soon as it loads, and what’s more important is that you won’t have to download any apps, the game will start playing as soon as you open the casino website in your mobile browser, log in and then pick Merlin’s Magic Mirror.

We know that you can’t go wrong with either slot in the Merlin slots series. The magic mirrors occur thanks to the scatters, so those lucky players who see two or more during their Merlin’s Magic Mirror free spins bonus, will see some winnings being triggered. This game can be played with as little as 20p, but you can also place as much as £20 per spin.

Play this and the other Merlin slots with a welcome bonus from one of the casinos on this page. Claim free spins, bonus money, or both, when you’ve found the offer of your choice.

Lord Merlin and the Lady of the Lake

The Sword and the Grail