Sheriff of Nottingham slot comes with a number of extras, such as the Wanted Spin, the bonus Add, the Sheriff Wilds and so on. Besides the extra features, there is a free spins bonus and there are base-game wins that are made with three symbols of the same kind on any one, or more, of the game's paylines. 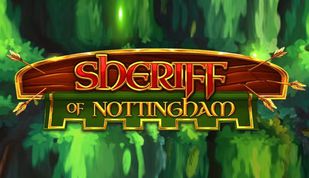 Enter the dark wood and face the Sheriff of Nottingham slot, where you can score cash wins in the base game and with the help of five extra features.

There are plenty of online slots about Robin Hood but how many put the Sheriff in the central role of the gameplay? iSoftBet just did it and we have a reel adventure that's played from the perspective of the forces that be which keep all the gold that Robin Hood wants to get to.

Well, guess what, if the Sheriff of Nottingham slot makes that persona the Wild and it's all about him, that means you are Robin Hood. We see what you did there iSoftBet, and we cheer on for a marvellously design online slot. The reel-set offers three rows and five reels and these spin across 25 always-active paylines.

iSoftBet have many slots under their belt so the succession of releases doesn't shy away from offering an engaging online slot. The symbols portray things that could be found in England of medieval times. There is a golden cross, the royal crown, crossed trumpets, a shield and crossed swords and the bounty for Robin Hood's head.

There aren't too many symbols that move in the Sheriff of Nottingham slots but that doesn't make the game any less exciting. Quite on the contrary, it offers a solid dynamic that the lucky players will find often punctuated by the reel modifiers that represent part of the game's extra features.

The musical theme is missing a minstrel on the reel-set that adds to the decor, otherwise, it is a solid production that contributes to the gaming experience.

How to Play Sheriff of Nottingham Slot

Before you make any spins on the game it would be a good idea to check the amount of the default bet. This information can be found in the bottom right corner of the screen.

To change the bet amount you need to press the poker chip button which is located underneath the spin button. Both of these, as well as the autoplay button, can be found on the right hand side of the reel-set.

The bets can be selected from a list that includes £0.25 per spin for the smallest amount and £25.00 per spin for the highest amount, which translates to payline bet values that start at one penny and reach £1.00 for the maximum.

On one hand the maximum bet isn't huge, but still entails a high-stakes play for most players. On the other hand, the smallest bet of a quarter of a pound isn't the smallest amount you'd find on slots nowadays, so it's best to play The Sheriff of Nottingham slot if you are willing to spend £0.25 in the first place.

If you wish to let the game spin the reels on its own you need to select the autoplay option. Like we said, the button is underneath the spin button. This mode offers optional settings such as to place a conditional stop, on a single win amount, on a total balance decrease amount and so on.

How to Win Sheriff of Nottingham Slot

Wins are made with three or more symbols on a payline and there are 25 paylines. Each bet plays across all of these paylines.

The most valuable symbol in the game is the Wild. Besides being a substitute symbol for all, except the bonus, the wild pays 20x multiplied by the winning bet when five of the same land on a payline.

The characters that are part of Robin Hood's posse are also on the paytable. These trigger the respin feature, where the Merry Men will appear with a cash prize attached to each respective symbol. In this part of the game, the most valuable symbol is that of King John, which pays 40x on the win.

The game abounds in features in addition to the free spins which is a staple to nearly all slots out there.

Sheriff of Nottingham slot has a random feature which triggers at any point in the base game. In the event, you get to pick one from the three letters that are offered to you.

That letter can reveal one of the four additional features.

The Wanted Spin causes the Sheriff symbol to fall on the reel-set and provide a chunky payout.

The Bonus Add feature causes three or more bonus symbols to land, for a higher chance of triggering the free spins.

Sheriff Wilds are when wilds are added to your spin and are stacked three on the reel.

And the last of the four features is Win Spin, where the gold coins that spin on the reels can stop and transfor in any one of the paytable symbols, except the bonus symbol.

In this game you are Robin and the antagonist is the scary Sheriff. His symbol pays a decent prize, but landing five wilds is not a common site. Thankfully there are four extras and a free spins bonus on top of these.

Claim a welcome offer from this page and discover Sheriff of Nottingham slots at top rated online casinos.