The payouts are made on consecutive reels, as there can be no other way for a slot game to offer up to 3125 ways to pay. The feature that defines the game, however, are the Dynamic Ways. Each reel can change size and position, locking some symbols onto the reels as active for the following spin. Dynamic Ways can also lock bonus symbols, which is always a good way of increasing the chances for a bigger win. 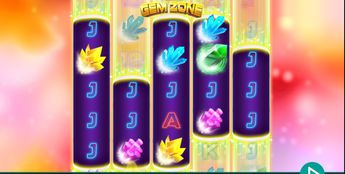 Play the Gem Zone slot for a chance to win cash prizes created by the Dynamic Ways mechanism, which is almost like a Megaways slot.

Lander Games has come up with a slot game about gems. This isn't the only one because there is a genre of online slots that deal with crystals, gems and diamonds. On the other hand, Gem Zone slot may well be the only one that offers up to 3125 ways to pay on a reel-set layout that is rarely seen in the world of online slots. Is this feature going to be enough to draw attention to this release in a sea of a variety of online slots?

For starters, the winning outcomes are multiplied by the total bet, so any amount that is attached to three, four and five symbol wins will reflect a sum multiplied by the triggering bet. Gem Zone slots can also produce six-symbol wins, which provide the optimal prizes for each of the respective symbols, however this is possible only in the free spins bonus.

The design gets all of its high marks thanks to the lively nature of the elements on it. Both the high cards symbols and the crystals and gems levitate and bob in their places. Those areas on each reel that aren't covered in the purple zone can be seen giving off a crystal sparkle and a neat glow.

Then again, you stand back and look at the game from afar to realize that the color layout is sort of off. Beyond that, the gameplay is indeed fun and engaging, while the way in which the reels turn is definitely the most entertaining thing on the Gem Zone slot, besides making a big win of course.

The sound score hits all targets for producing a dreamy, swooshy musical theme for the gameplay.

How to Play Gem Zone Slot

The play button entails a reel action with each push and few seconds later, you get an array of gems and crystals that have resulted either in a win or in your wager amount minused from the balance.

Speaking of that, to choose your preferable bet for each spin you need to click or tap on the Total Bet window and select one of the available options. The smallest bet on Gem Zone slot is £0.20 per spin, not a terribly high amount for the minimum bet. On the other hand, the maximum is a whole, round £200.00 per spin.

Besides the Play button, which sets the reels spinning once. To send the reels spinning on their own you can enable the Autoplay option. Clicking on it opens up a menu where you can choose from the number of spins presets. Since there aren't any optional stops, its best to choose a bet that reflects the duration of your balance.

How to Win Gem Zone Slots

To win in the game the reel-set needs to show three or more symbols of the same kind from the leftmost reel and on to the right. Gem Zone slot can turn up wins of more than five symbols during the bonus game, however more than six of the same symbols can also make a visit for the win.

The most valuable symbol is the red gem, paying 7.5x on the winning bet when six of the same stop on the reels. It is followed by the green gem which is worth 3x. The yellow gem pays 2x and the blue and purple pay 1.75x.

The rest of the symbols consist of the high cards and these pay smaller amounts. Gem Zone has a wild that substitutes for any except the scatter/bonus symbol.

The bonus is triggered when three of the corresponding symbols stop on the odd number reels.

The reward is 10 free spins during which a sixth reel is added, and with it, the size of the zones will change between five and seven rows. In the bonus game the number of Dynamic Ways is between 15,625 and 117,649 which is pretty much a megaways now.

When another three bonus symbols fall in the dynamic zones on the even-number reels, the free spins are retriggered.

Leander Games have made a solid online slot and they’ve ensured it reaches everyone who wants to try it, so the game can be found for demo play.

The game at hand acts like a megaways slot, however there aren’t cascading wins. Still, the symbol prizes are exceeded when there are more of the same falling on consecutive reels. With a theoretical return to player of just below the average, Gem Zone is still a game worth checking out.

Claim a welcome offer and discover Gem Zone slots at the online casinos on this page.